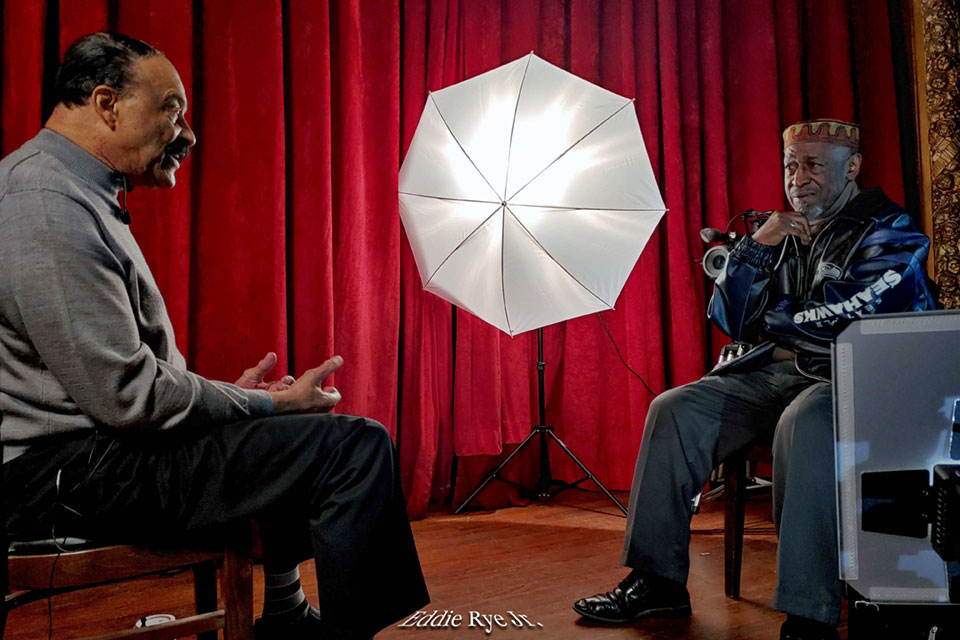 Former residents of a Central Area, a formerly Black Seattle neighborhood now known as the Central District, are working to document their hometown’s rich Black heritage – and want to provide a blueprint to other cities for preserving hyper-local Black history.

The Seattle Griot Project is named for a West African phrase for a community historian, the "repository of oral tradition" through storytelling, poetry and music. In practice, it will be a highly visual platform for recording and indexing local oral histories from everyday people. 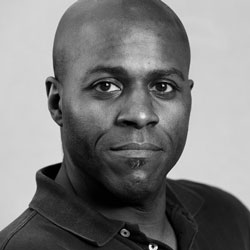 Roger EvansThe group has conducted 49 interviews so far, with a goal of at least 200 sit-down, filmed conversations with elders.

“The oldest person so far we’ve interviewed has been 98, Josephine Stokes,” longtime multimedia educator Roger Evans, who launched the project, told The Skanner. “Her husband was judge Carl Stokes, so we did an exhaustive interview with her. She’s also allowed us in her home several times. She has a sign-in book that everyone who came into their home signed, and one of the names we found in the book was Thurgood Marshall back in 1952.”

‘Very Little to Be Recognized’

The project began in the early aughts as Evans’ effort to record interviews with “people of color that were successful in our community,” Evans said, with the vision of creating a series of DVDs that would be made available in public libraries. The project fizzled due to lack of funds, but Evans held onto the material.

“I noticed a couple years ago that my granddaughter was extremely savvy on her cellphone. I spent a lot of time with her, and I recognized that even though she could sit and read a book that was not what compelled her…My business went into super-stasis during the pandemic, and I wanted to create something that would capture an essence” of the neighborhood he remembered.

“There was very little to be recognized,” Evans said. “So in early 2021, we took this challenge on again to start digitizing and preserving the oral histories of the elders. We wanted to bridge the gap so we had this information online, so that our people in our community, wherever they were, would have access to the data that their grandparents or they, if they were elders, remembered and had available to them.”

Volunteer Clyde Merriwether spoke to the universal nature of his neighborhood’s gentrification.

"The next real property was the dumping ground, where they put the Black folks.

"All of a sudden that became prime property – all these Microsoft (employees), they’re all moving into the neighborhood as they get into town. Where can they go? 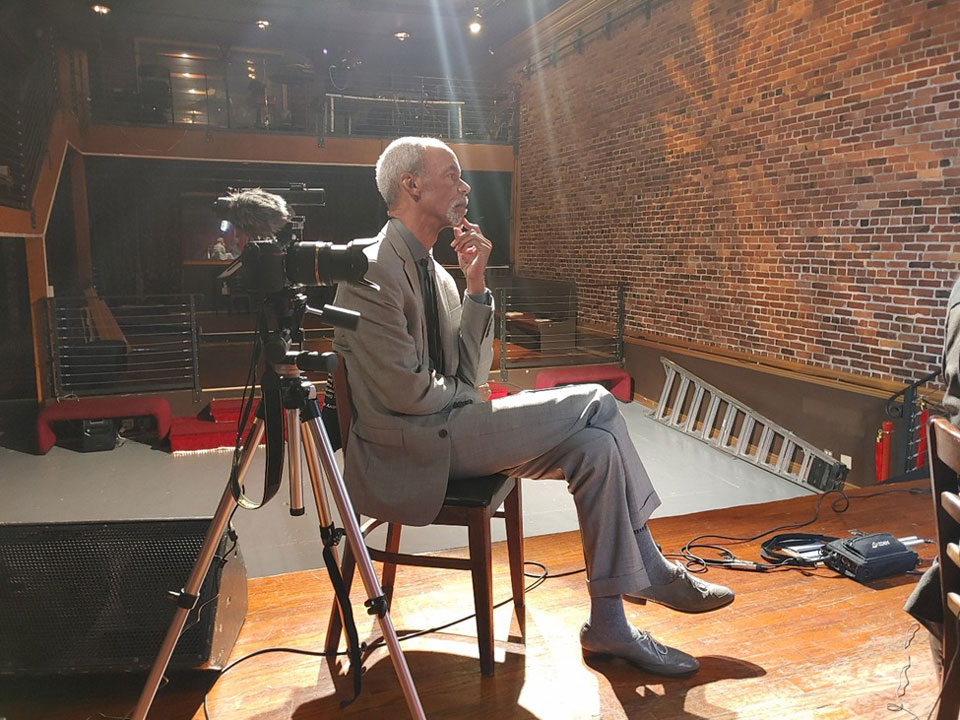 Clyde MerriwetherAnd just as quickly, the neighborhood’s Black identity and any semblance of its history began to disappear.

“For the white folks moving into it, they don’t see themselves as having displaced anything,” Merriwether said. “It’s not like they’ve got malice. The Blacks, to a great extent, have been salt-and-peppered out into the south-end cities of Seattle. But they didn’t move into a neighborhood. They’re all over the place. So there is no Black neighborhood.”

Merriwether has few complaints about his family’s relocation to Kirkland, or the fact that he and his brother and sister were the only Black students in their new school. On the contrary, Merriwether recalls having an excellent time in high school.

But he regrets the loss of any real kind of Black neighborhood in Seattle. And so, with Evans and Charlie James, he has become one of the three main interviewers for the Seattle Griot Project, which is now headquartered in the Columbia City Theater in Seattle, where sit-down conversations of around two hours are recorded onstage or in a conference room nearby.

Inevitably, the project expanded its scope.

After sitting down with longtime activist Eddie Rye Jr., interviewer Charlie James reported on the wealth of resource materials Rye had held onto that validated his stories.

“Eddie has been saving newspapers since 1969,” Evans said. “He had a garage full of this stuff. So for that year of 2021 until March of 2022, I went over there twice a week sorting, scanning and logging this information.”

The interviewers began asking whether their sources had any materials to go along with their oral histories. They found that the vast majority did.

“So now we’re in all these peoples’ homes, and some of the stuff is so interstellar,” Evans said.

“A lot of these elderly people don’t know how to scan their own work or don’t have the tools. You offer this service for free because they have let you into their lives, and it’s a win-win situation.”

“The real secret, it’s been overlooked, is if the people have survived the experience and they’re still in our community or any community, quite a large amount of them will have artifacts. These artifacts alone may not tell the whole story, but the convergence of the different articles and stories that are told, become the story of what went on.

“Digitizing isn’t like taking possession. You’ll go into the home or they’ll loan you the document for a period of time, you digitize it and give it back in the same state it was before or better, and they get a copy of the digital and you get a copy of the story so now you can tell it.”

As a matter of course, volunteers with the Seattle Griot Project have begun offering a complementary thumb drive to interviewees containing newspapers, photos and other materials they contributed that have been digitized.

And though elders are generally pretty eager to share their stories, the group did not lose sight of the fact that all of the remembering and sourcing was unpaid. This, Evans explained, has been key to securing funding for the project.

“All of the work we’re doing with these people, they’re volunteering,” he said. “It’s allocated as volunteering. When you have 100 people, now you’ve got a community involved. A lot of these neighborhood grants look for programs – whether it’s to solve crimes or preserve heritage content – and within these projects, they’re looking for cohesion. If you have a cohesive community, now your police don’t have to do any work.”

Another source of funding that dovetailed with the Seattle Griot Project’s process was a grant from the National Endowment of Humanities.

“If you’re preserving newspapers that are from 1963 or older, you can apply,” Evans said. “You’re digitizing and preserving stuff so the Library of Congress gets access to it.”

“I’m finding the biggest abyss between the digital age and the analog age is there’s this divide, where the material has not been digitized, so it’s not online, it’s not available, so it really doesn’t exist,” Evans said. “When you start getting into the 70s, the 80s, the 90s, you are in fresh territory.”

“The stories carry so much weight.

"They wanted to preserve this legacy, and they wanted people to recognize hey, we’ve been here. I know 99% of these people didn’t really know what they were going to do with this material.”

He has found sources with file cabinets full of information. Norman Proctor, the son and namesake of a former Tuskegee Airman, kept issues from The Garfield Messenger, his largely Black high school’s campus newspaper, from the mid-60s, along with the odd issue of The Seattle Post-Intelligencer that covered his time participating in track and field competitions.

“I’m finding that most of the people we do oral histories with have some kind of paper trail to validate what they say,” Evans said. “It’s literally, ‘I bought the car, here’s the receipt.’”

“As we’re scanning as many of the newspapers as possible, I want to analyze the economic potential of the Black community in the United States,” he said. “(Studying ads and local human interest features) gives us a better gauge of, how was our little community’s economy doing? If we could target Cleveland’s Black economy, New York’s Black economy, etc., from the same time, and see were people buying stuff for this much? Did they have big unemployment rates? Then we can start gauging what builds and what stagnates our communities. We want to have this database, and we want it to be verifiable. So the newspaper archives with dates and times will validate our statistics.

For now, the group is in the process of transitioning its website “from being a presentation site to being an information site” with an easily navigable index. Grant funding has allowed them to bring on an archivist, too, who holds workshops for the community on how to preserve tangible relics like newspapers and photos. (One quick tip Evans offers: Move papers from cardboard boxes to plastic storage to keep the water out.)

Ultimately, the group would like to expand to become the Pacific Northwest Griot Project, and aims to see its methods replicated in other states and regions.

“This task is so big,” Evans said. “Every time I mention it, people take a step back. But if you don’t even attempt to do it, it will not happen.”

He has found more financial support for the endeavor in the wake of the George Floyd and Breonna Taylor killings, and emphasizes the importance of preserving and making accessible Black heritage.

“We have to find commonality to stop all the craziness that goes on,” he said. “When everybody finds out they’re in the same pot, or we even share some history or ancestry or experiences with our grandparents, the world just becomes a little bit smaller.”