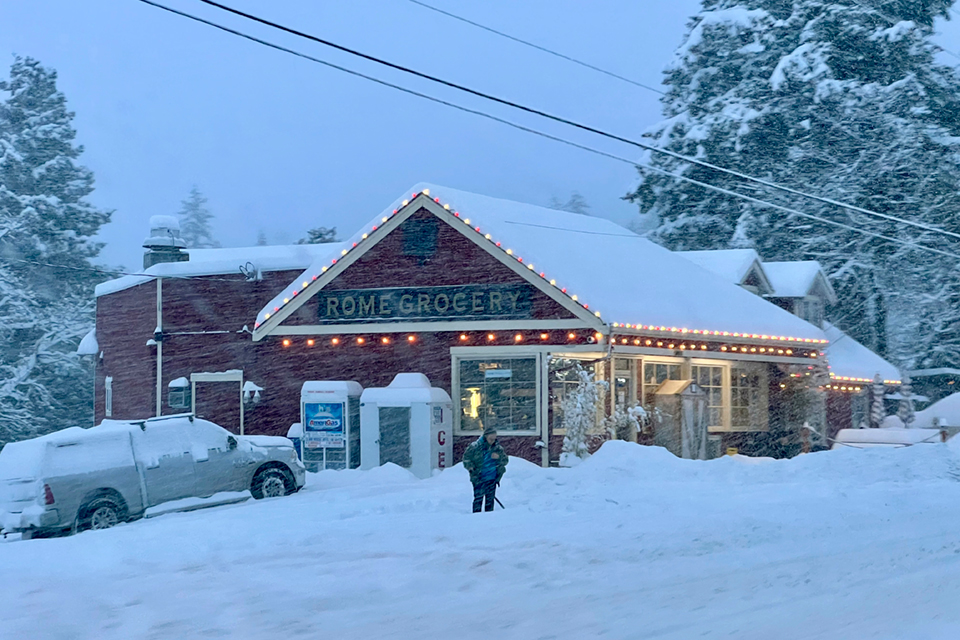 PORTLAND, Ore. (AP) — Heavy snow, freezing rain and sleet have disrupted travel across the Pacific Northwest, causing widespread flight cancellations and delays and creating dangerous driving conditions in the region stretching from Vancouver, Canada, down through Washington state and Oregon.

In Oregon, one person died in an accident on Interstate 84 in the Columbia River Gorge near Rooster Rock State Park on Tuesday morning when a semi-truck collided with their SUV, the Multnomah County Sheriff’s Office said. Police are conducting a crash investigation and noted that the thin layer of ice on the major highway that weaves its way through the Gorge may have been a contributing factor.

About 47 miles (75.6 kilometers) of eastbound I-84 between Hood River and Troutdale closed earlier in the day due to crashes caused by ice, the Oregon Department of Transportation said. After all eastbound lanes reopened, transportation officials said drivers should still use caution.

In Washington, heavy snow in parts of the Cascades closed two of the main roadways across the state on Tuesday.

Multiple spinouts stopped traffic in both directions at Snoqualmie Pass, a mountain pass on Interstate 90 about 50 miles (80 kilometers) east of Seattle. U.S. Highway 2 over Stevens Pass, Highway 12 over White Pass and Highway 97 over Blewett Pass were also all closed Tuesday afternoon in both directions due to spinouts and crashes, the Washington Department of Transportation said. By Tuesday evening, passes on Highway 2 and Highway 97 had reopened, with Snoqualmie Pass estimated to reopen at 9 p.m.

“Be prepared for adverse weather,” transportation officials said on Twitter. “Crews have more wrecks to clear & continue to clear snow.”

The agency said it had deployed plows to major thoroughfares across the region and said its maintenance crews will be working through the night for the next several days.

In Idaho, transportation officials said on Twitter after 5 p.m. that getting anywhere in the northern part of the state was a challenge because of the snowfall and number of plows that had been hit. I-90 eastbound over Lookout Pass was closed. 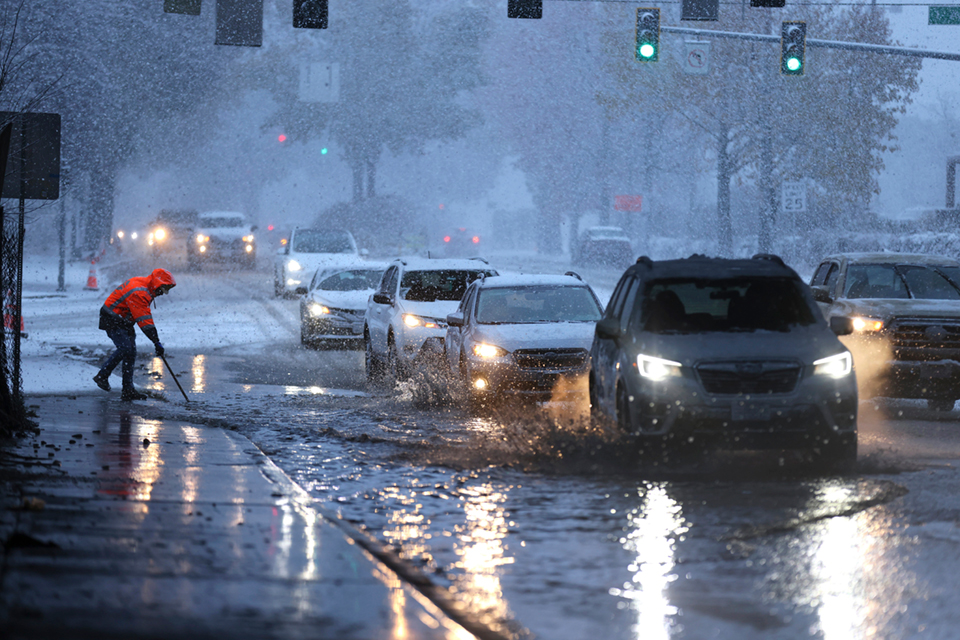 A worker from Washington Department of Transportation clears a drain on Northgate Way during a heavy snow at the morning commute in Seattle, on Tuesday, Dec. 20, 2022. (Karen Ducey/The Seattle Times via AP)

In Vancouver, Canada, authorities at the city's YVR airport said the conditions resulted in an "unprecedented number of cancelled flights,” adding that cancellations and delays “will persist for the majority of scheduled flights" and that de-icing operations will continue to be necessary.

At Seattle-Tacoma International Airport, 205 flights had been canceled and 386 delayed as of 6:35 p.m., according to online tracker FlightAware. Earlier in the day, the airport said de-icing operations were in effect.

Areas north of Seattle received heavy snowfall. About 90 miles (145 kilometers) north of the city, in and around Bellingham, people were shoveling sidewalks and driveways, as well as sledding and cross-country skiing, after about a foot (30 centimeters) of snow fell in some places.

In Oregon, officials are preparing for frigid temperatures that have been forecasted for later in the week.

Multnomah County and its seat, Portland, both declared a state of emergency starting Tuesday, the county said in a statement. Officials said the declaration is meant to “alert the public to the life-threatening temperatures” and give the county the maximum flexibility to respond.

The county said it will open four severe weather shelters at 8 p.m. on Wednesday for as long as conditions require.

Temperatures in the Portland area on Thursday morning could dip down into single digits with wind chill and plunge to near zero degrees Fahrenheit in and near the Gorge, according to the National Weather Service in Portland.