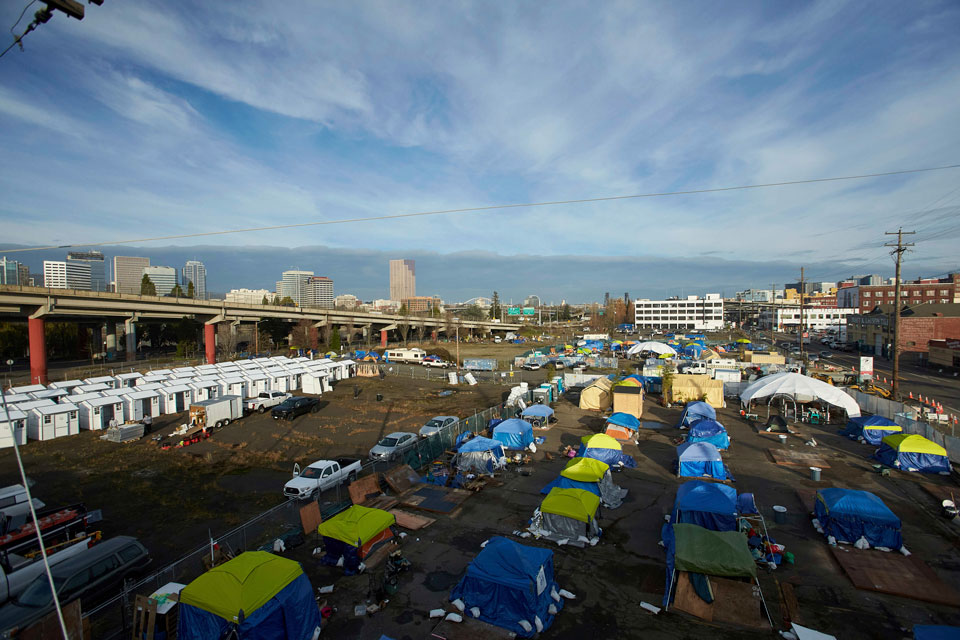 PORTLAND, Ore. (AP) — City Council members in Portland, Oregon, have voted to allocate $27 million of the city's budget to build a network of designated camping areas for homeless people, approving a fiercely disputed budget measure as the city tries to address its homelessness crisis.

The money will help finance a measure passed by the City Council earlier this month that banned street camping and approved the creation of six outdoor sites where homeless people will be allowed to camp. Under the measure, a ban on street camping will phase in over the next year and a half as the sites are completed.

Before Wednesday's vote, Mayor Ted Wheeler acknowledged the measure was controversial but that he nonetheless believes in it “very, very deeply." Wheeler and other supporters of the measure contend it will make streets safer and connect homeless people with social services.

"It is beneath us as a moral and ethical society to have that happening in our community. And therefore we need to do something differently.”

The $27 million will help launch the first three campsites, with nearly half going toward their operational costs for the remainder of the fiscal year. About $4 million of it will be directed to the sites’ preparation and construction.

Wednesday's measure amended the city’s budget for the current fiscal year to include the new projections.

Public opposition to the measure and the money that will fund it has been heated, with critics saying it will criminalize homelessness and fail to address its root causes.

The initial vote on the budget measure was postponed after a raucous City Council meeting during which some who opposed the plan interrupted council members and had their microphones cut after refusing to abide by time limits in emotionally charged testimony. The commotion prompted members to leave the chambers and conduct the rest of the meeting online.

During that meeting, resident Shannon Kearns said in testimony that the plan amounted to “putting money into internment camps under the guise of support for our most marginalized community members.”

The six designated campsites will initially serve up to 150 people, with 24-hour management and access to services such as food, hygiene, litter collection and treatment for mental health and substance abuse.

The location of the sites and the exact details of how they will work have yet to be confirmed, but Wheeler’s office has unveiled a potential roadmap in recent Zoom calls with community stakeholders.

So far, the city has envisioned camps that would not allow walk-ins; people would have to be referred by outreach workers. Alcohol and drugs would be banned in common areas. Sites would only have one entrance and exit, and weapons checks would be conducted there.

Service providers running the sites would be responsible for security inside and within a 1,000-foot perimeter of the camps. But the budget allocates $750,000 to help neighborhood groups hire private security for areas around the first three sites.

The location and security of the sites is already shaping up to be a contentious issue. Some neighborhoods, including those that are lower-income and those already struggling to address homeless encampments, are worried the sites won't be spaced out equitably across the city.

A group of residents and property owners from downtown, where many homeless services are located, testified before Wednesday's vote. One of them, Kat Ulrich, shared pictures of the aftermath of a violent confrontation she and her husband had with a homeless person experiencing a mental health crisis.

“He punched me in the face. I went down, came up with blood on my hands and my face, and my nose was broken. Him and my husband were rolling on the ground," she said. "Somebody eventually came out with some mace and sprayed the man, and he ran off.”

Homeless advocates say that more affordable housing is needed to truly tackle the issue. While mental health treatment services are essential, they point out that not all homeless people have mental health or substance abuse issues.

As the sites are built and the street camping ban phases in, outreach workers will be tasked with directing people living on the street to the designated camping areas. Those who refuse to leave their encampment could be cited, but the citations could be waived if the person takes part in a diversion program that would require mental health or substance abuse treatment in lieu of jail time.

To develop the diversion program, the new budget transfers $250,000 from the police bureau to the Street Services Coordination Center, which provides homeless outreach.

Mayor Wheeler has previously said he thinks the $27 million would cover about half the costs of creating the sanctioned campsites. The mayor's office has urged the state to declare a homelessness emergency, and to support a request from the Oregon Mayor's Association for a budget package totaling $123 million during the next legislative session, which starts in January. The package would provide direct allocations to cities for homelessness services.

Denver and Austin, Texas, have also passed ordinances both banning public camping and allowing sanctioned campsites. Denver has opened several “safe outdoor spaces” since 2020 where tents, food and other services are provided. In Austin, the Esperanza community is a sanctioned encampment that serves about 150 people and is currently constructing 200 individual shelter units.

Claire Rush is a corps member for the Associated Press/Report for America Statehouse News Initiative. Report for America is a nonprofit national service program that places journalists in local newsrooms to report on undercovered issues.