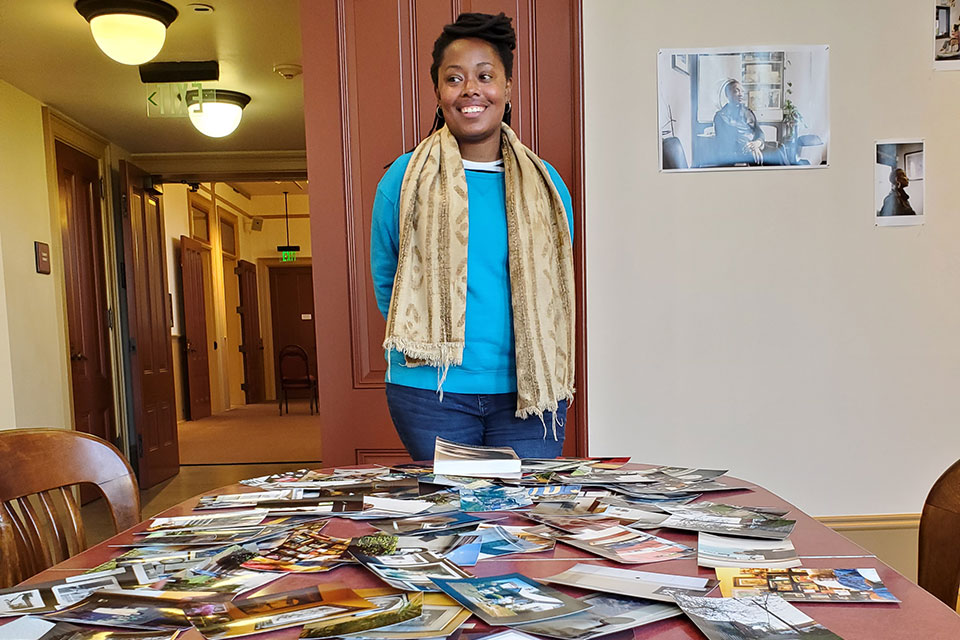 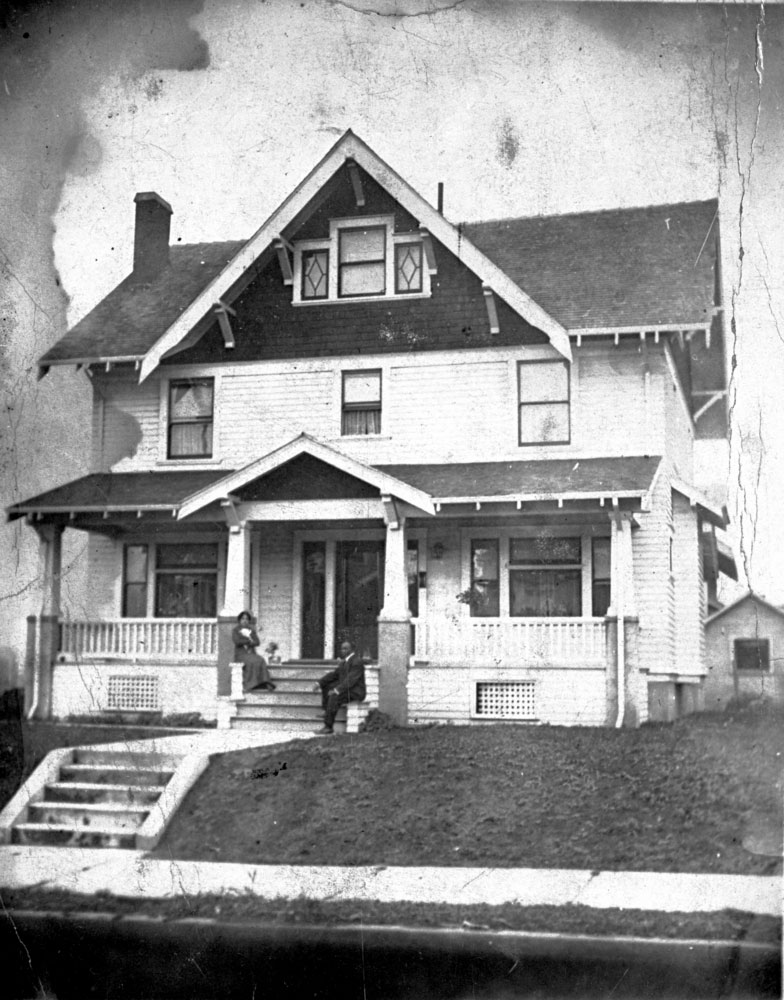 The Beatrice Morrow Cannady house, circa 1911. (Image courtesy Oregon Historical Society Research Library)The yellow five-bedroom Foursquare Craftsman on Northeast 26th Avenue would be a dream for most prospective buyers. Located in Grant Park, the stately home dates back to 1911 but offers more than 3,400 square feet of modernized comforts mixed with classic built-in features. Even from the curb, it echoes decades’ worth of pride of ownership.

To artist Intisar Abioto, the property, better known as the Beatrice Morrow Cannady house, is a historic landmark that should be restored to its earlier purpose of housing and nurturing Black talent.

It is the place where Beatrice Morrow Cannady, originally from Texas, began a family and ultimately a multifaceted movement that would lead to legislative change and significant civil rights gains. And it’s back on the market.

“These are vital, important spaces,” Abioto said. “We don’t have any Black museums here.

"And for me that’s not because Black people haven’t wanted it. It’s directly correlated to the intergenerational, purposeful displacement of the Black community. Because how can you build up sustaining, long-ranging institutions that stay in a community if that community is continuously moved? You have to have a home first.”

Heart of a Movement 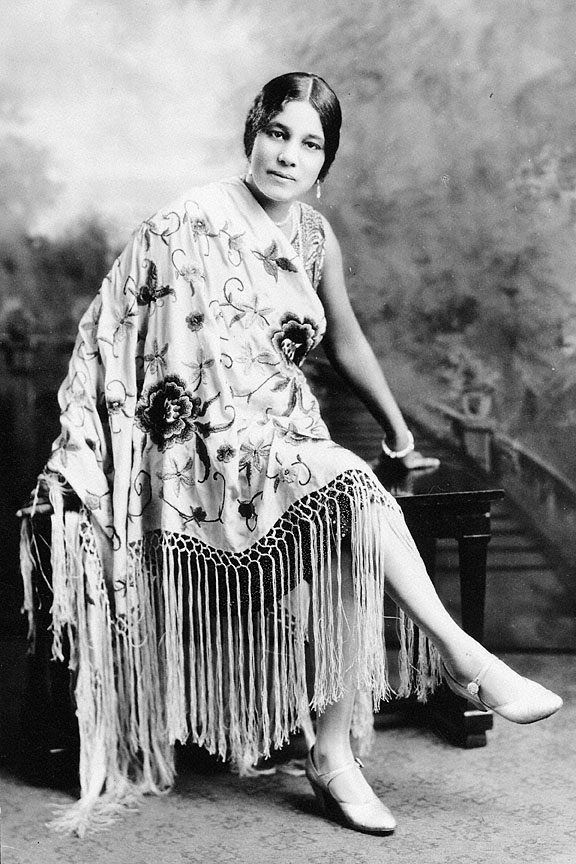 Beatrice Morrow Cannady in 1926. (Image courtesy Oregon Historical Society Research Library)Cannady was an influential community organizer, civil rights activist and founding member of the Portland NAACP; the editor and owner of Portland's first Black-owned newspaper, The Advocate; and the first Black woman to graduate from law school in the state of Oregon when she received her degree from Northwestern College of Law in 1922. Her legislative work ultimately led to the overturning of racist laws that disenfranchised African Americans in Oregon.

As a journalist, Cannady tracked and reported on the Ku Klux Klan and discrimination against Black students in public schools, as well as the exclusion of Black citizens from businesses and public spaces.

But aside from her groundbreaking efforts, Cannady also kept a home with her husband Edward that Abioto likened to a Green Book entry: A safe haven for Black speakers and artists coming through town and seeking accommodation, but also good company and interesting conversation. The Cannadys’ living room became a library with more than 300 books authored by African Americans, often documenting Black history in the U.S.; it was also the site for many popular salons and interracial afternoon teas.

According to local historians, the Cannady house routinely hosted gatherings of more than 100 people at a time. 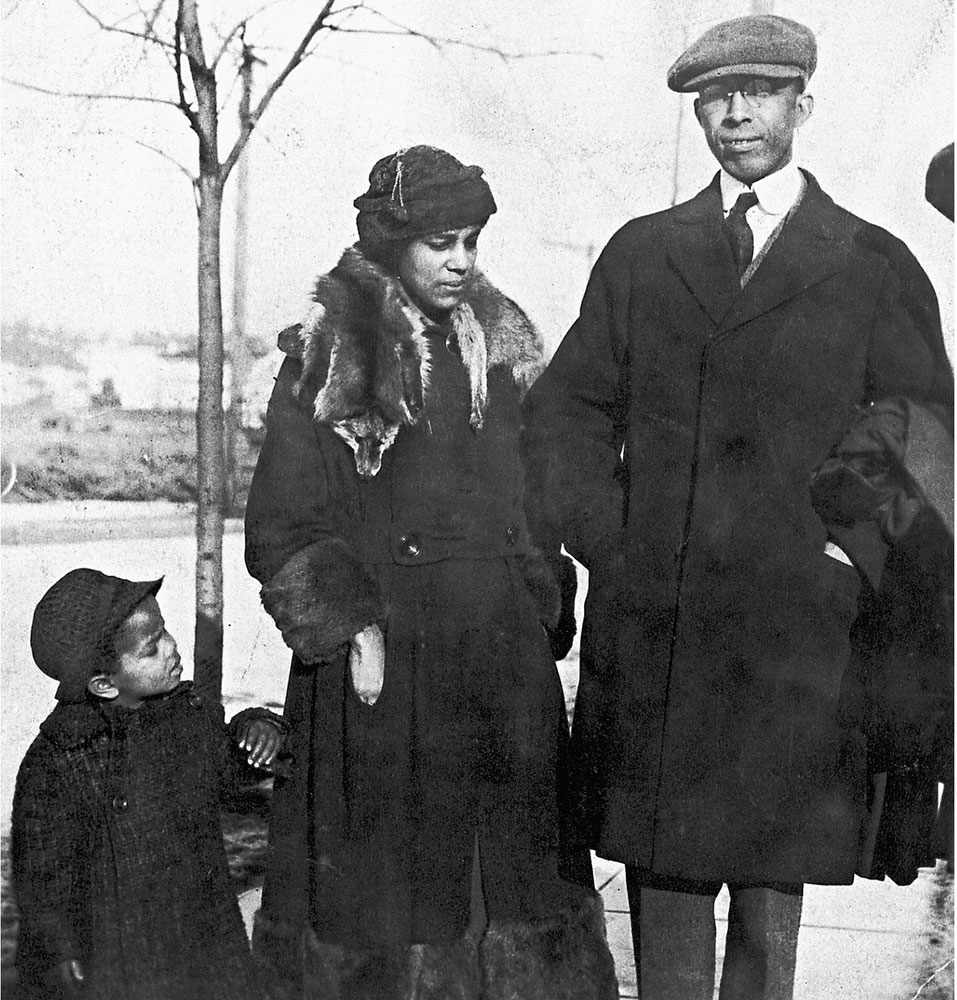 Beatrice Morrow Cannady with husband Edward and son George, circa 1912. (Image courtesy Oregon Historical Society Research Library)“This woman was a powerful force for change who shaped this city as much as any politician or downtown civic leader, and her home was the beating, energetic heart of Portland's civil rights activity for decades,” professor and jazz musician Darrell Grant wrote in a letter of support to Abioto.

It’s a sentiment Abioto felt when she first photographed the home in the fall of 2019. In September, she learned it had been listed for $1.15 million.

“I thought, ‘We should try to get this house! This is important!’ It wasn’t, ‘How will I do this?’ First you just have to say let’s try,” Abioto said.

“We” in this case means Abioto’s family, but also an expansive network of Black artists, leaders and activists. She broached the idea with a group of dance elders she hosted at the historic Albina Arts Center and, heartened by their strong encouragement, emailed a number of her contacts and colleagues about her hopes of fundraising.

Should they be successful in securing the house, Abioto intends to work to turn the property into “a home in the Black arts tradition, not a museum that’s open from 11 to 5.”

“You talk about the challenges, but what you really want to get to is the excitement, the creativity,” she said. “It’s going to be a home, but it’s going to be a home in the Black arts tradition. And by that I mean homes are where our art started…A lot of these sites really need to be reactivated into community use beyond a house museum. And in terms of the amount of funding it takes to keep them going, creative uses keep them activated.”

A Community of Support

Among Abioto’s supporters is former Oregon Sen. Avel Gordly who, with her sister Faye Burch, is transforming her own childhood home into a neighborhood archive and the headquarters of the Gordly Burch Center for Black Leadership and Civic Engagement.

A bit further north, musician Esperanza Spalding is establishing a sanctuary in St. Johns for BIPOC artists. She crowdfunded the necessary $300,000 last year, and Abioto said Spalding contributed $5,000 toward the purchase of the Cannady house.

Still, it might seem unlikely that a working artist would be able to scrape together an offer with accompanying proof of funds quickly enough to make a bid in Portland’s punishingly competitive real estate market. But last week, Abioto said, a benefactor came through.

“Someone reached out to us in the community who said they wanted to put in the offer for us, on behalf of the endeavor,” she said. “It was a little over two weeks ago. They believed in what we were doing and saw the importance of it…What it would do is allow us to purchase the house while having the time to do that fundraising. It really opened the door for it to be a possibility.”

Abioto said the party who made the offer requested not to be identified publicly.

Abioto understood that theirs would be a backup offer, as the current owners had already received a bid. But Abioto is appealing to the owners to take the historic and cultural significance of the property into consideration.

Abioto met one of the owners three years ago when she first photographed the exterior of the house for a project and they invited her in. She recently returned to the house to speak with the couple, who had learned of the home’s history after moving in.

“They were really great stewards of the house in terms of restoration,” Abioto said, adding that they had found an old photograph of the Cannadys sitting on the porch of the home and used it as reference when making changes to the exterior.

During her recent visit to the Cannady house, Abioto said, she brought along some of her work to share with the home’s owners: Black Mark, Black Legend: Uncovering the lineage of Black artists in Portland, a piece she wrote for Oregon Humanities, and Black Portlands, an in-depth photo essay about some of the city’s Black creatives.

She also invited them to Black Domain, her photo exhibit at the Architectural Heritage Center. Through a series of intimate portraits of Black Portlanders at home and other welcoming community spaces, Abioto explores themes of ease and belonging within sites of strong historic, cultural and architectural significance. There is a strong sense of sanctuary within the images – a theme that dovetails with her vision for the Cannady house, even though the exhibit was completed and displayed before Abioto knew the home was for sale.

“We’re not going to talk about all the important things at the museum…There are conversations you can have in the morning or the evening on a couch that you can’t have (on a banquet chair).”

For a community so long pushed out of public spaces, the home served as a meeting space for artists and activists, as Abioto pointed out. But there is also an inherent coziness and comfort to the home – and to the Cannady house in particular – that Abioto finds conducive to creation.

“Black women, they’re so much about a need for production, a need to be working,” Abioto said. “A need to always be contributing, even to community. But we too deserve rest. We too deserve home.

"It’s not always about fighting for community; it’s about resting among ourselves.”

In a letter of support from the Oregon Historical Society, Eliza E. Canty-Jones, chief program officer and Kerry Tymchuk, Boyle Family executive director, called Black Domain “an especially strong example of what (Abioto) can bring to the community through ownership of the Beatrice Morrow Cannady home.”

Canty-Jones and Tymchuk called Abioto’s vision “well aligned with the home’s history” and drew comparisons between Cannady and Abioto: “Like Abioto, Cannady was born and grew up outside Oregon and moved to the state as a young adult. Once here, she was called to work that fostered healing, pride and political power in the Black community and that helped make White community members more aware of the oppression and violence faced by their Black neighbors.”

Abioto moved to Portland from Memphis 12 years ago with her mother, a writer and activist, and her four sisters, who are each artists in their own right. A graduate of Spelman College in Atlanta, Georgia, Abioto has advanced as an artist while delving deep into her adopted city’s uneasy reckoning with racial justice. Her images and writing have gained her recognition, with Oregon Humanities awarding her an Emerging Journalists Community Stories Fellowship in 2018. She landed a solo exhibit in the governor’s office the following year, and has shown her work at the Portland Art Museum.

Abioto intends to become the Cannady house’s steward, and hopes to use part of the three-story home as a residence she can share with her family.

“It can still be a home,” she said. “I want it to be what it was then – a home for Black women activist artists. And for me, that is my family.”

“We are inspired by Abioto’s vision of anchoring her and her family in Cannady’s historic home and of using that space for art, for healing, for growth, and for community,” Canty-Jones and Tymchuk wrote.

“Here at OHS, we foster scholarship, preserve community knowledge, and educate the public about that history of displacement as well as about the Black and other visionary Oregonians who have worked to make our region one of belonging, justice, and wellbeing — people like Beatrice Morrow Cannady and Intisar Abioto.”

By “reinitiating” the house, Abioto hopes to bring greater attention to the lives and work of influential Black women who may have faded into obscurity.

“Black people and Black women, their lives are not studied,” she said. “Their contributions are not studied and uplifted. I see this house as activating that important research.”