Oregon's History With the KKK Runs Deep – and Right Through Portland 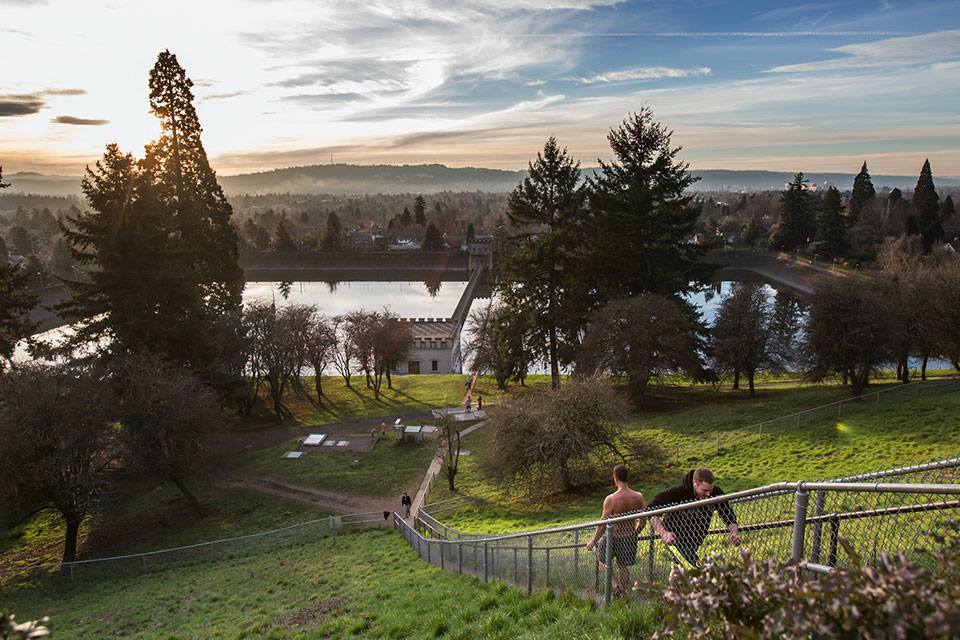 First in a series

In the 1920s, a resurgent Ku Klux Klan found a warm reception in the City of Roses and the rest of the state

A century ago, Portland was Ku Klux Klan country.

By 1922, only one year after the reincarnated Klan expanded to Oregon, the Rose City hosted one of the nation’s largest KKK chapters.

In the 1922 elections, Klan members and sympathizers gained control of the Multnomah County Commission and Oregon House of Representatives. They helped defeat an incumbent governor and replace him with a Klan sympathizer and provided the muscle to pass a state ballot initiative aimed at banning Catholic schools.

In the following weeks, to mark the 100th anniversary of this abomination, the Portland Tribune will recount this rarely discussed chapter in our history. We will chronicle how this hate group catapulted to political power statewide and locally, how it reserved much of its venom for Catholics, and how much of the media gave it a pass. We will explain how it fizzled almost as fast as its startling rise to power and offer parallels to today.

The resurrected Klan arrives in Oregon

In the spring of 1921, Bragg Calloway stepped off a train from Houston, dispatched by Klan headquarters in Georgia as its first organizer in Portland.

Calloway was one of three paid Klan field organizers or “kleagles” in Oregon.

Earlier that year, Luther Powell had come up from California and begun recruiting Klansmen in the Medford area. C.N. Jones was organizing in Eugene.

The new version of the Klan, formed in 1915 in Atlanta, was a privately owned corporation, which grew by paying organizers a share of membership fees. “These traveling salesmen of hate, who worked on commission, moved from town to town with lists of potential members in their pockets and samples of Klan paraphernalia in their suitcases,” wrote Eckard Toy, the foremost historian of the Klan in Oregon, according to contemporary historians. 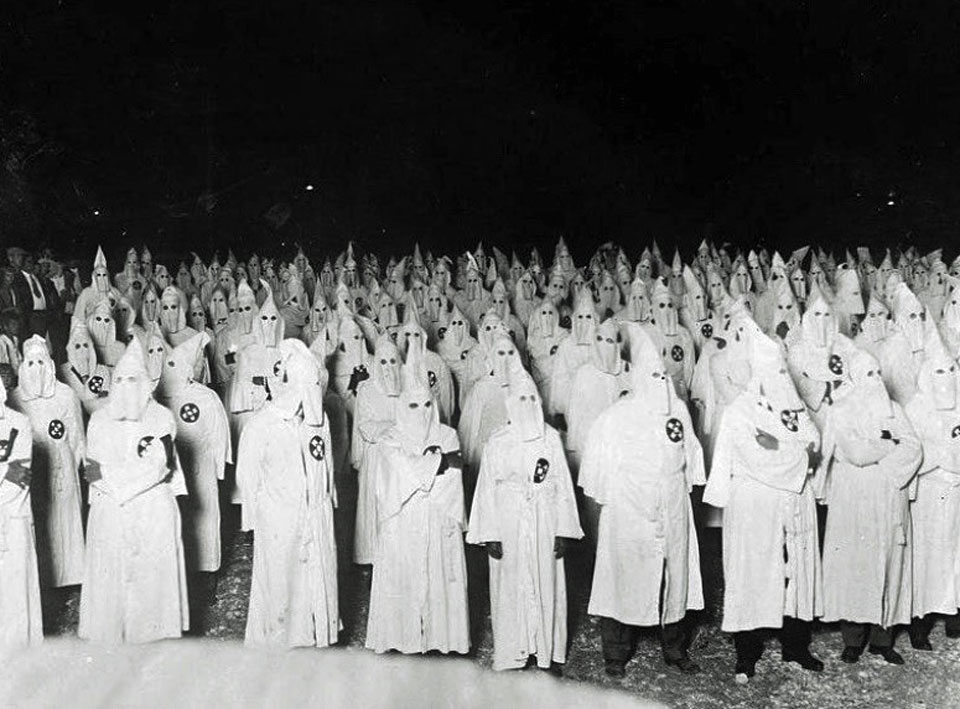 A Ku Klux Klan meeting, likely in 1921, likely in Portland. Most residents today don‘t know that Portland became the virtual headquarters of Klan activities west of the Rocky Mountains, and that the Klan dominated city, county and state politics for a time. (Courtesy Photo: Library of Congress, by way of Oregon Public Broadcasting)The Portland Telegram newspaper broke the story of the Klan’s arrival here in a June 17, 1921, front-page scoop headlined “Ku Klux Klan Puts Portland Upon Its List.”

Calloway had signed up “a few score” members while laboring quietly here for several days, the Telegram reported.

The Klan was targeting white, American-born Protestant men. Its recruiting literature, obtained by the Telegram, stated that it sought “uncompromising standards of pure Americanism untrammeled by alien influences and free from the entanglements of foreign alliances.” That meant no immigrants and no Catholics, who allegedly were beholden to the Pope in Rome.

Though Calloway wasn’t directly quoted, he was abruptly fired for “disobeying instructions” by talking to the Telegram, according to historian Kenneth J. Jackson.

Eckard Toy had a different explanation. He attributed the changing of the guard to a dispute between Calloway and Powell over sharing commissions from new member sign-ups.

Powell, who hailed from Shreveport, Louisiana, had demonstrated deft organizing skills. He’d recruited numerous Medford police officers to the Klan, worked with them to combat bootleggers in Jackson County, and spearheaded a successful recall of the elected county sheriff.

“Within a month, the mayor of Medford was dressed in white robes as well,” wrote historian Ben Bruce in an academic paper.

Under Powell’s leadership, Klan membership grew rapidly. By July 7, the Telegram reported Klan claims to have enlisted 1,000 members in Portland.

On Aug. 1, the Klan went public. At a press conference attended by Portland Mayor George Baker, Powell claimed the Klan had signed up 150 policemen among its initial Portland recruits. Other chapters were forming in Salem, Eugene, Ashland, Medford and Hood River.

The KKK managed to get several officials to pose in a photograph—including Baker, the Portland police chief and county district attorney—along with two hooded Klansman who reportedly popped in right before the shutter clicked.

The Klansmen were Powell, who now claimed regional responsibilities as the “king kleagle” for Oregon, and Fred Gifford, who would head the fast-growing Portland chapter as “exalted cyclops.”

The common image of the Ku Klux Klan stems from its early years in the South after the Civil War, when it terrorized Blacks to reverse gains made during the post-war Reconstruction Era.

Founded in 1865 in Pulaski, Tenn., the Klan mobilized men in white robes to carry out night-time raids and lynchings to intimidate Blacks and their Republican allies.

Later, under an 1877 Congressional compromise to settle the disputed presidential election of the prior year, Republicans gained the White House while Southern Democrats won the removal of federal troops in the South and an end to Reconstruction.

Racist Jim Crow laws enacted across Southern states then achieved what the Klan had sought — the end of Black voting power and the restoration of white supremacy.

Klansmen didn’t need to do night-riding or hide under white robes any more because they were now in power, Millner says.

Fifty years after the Civil War, D. W. Griffith, son of a Confederate Army colonel, released his epic silent film “Birth of a Nation,” set in the South after the war. Based on Thomas Dixon’s novel “The Clansman,” the 1915 film played loose with historical facts. It denigrated Blacks and romanticized the Ku Klux Klan as the protector of white women and white supremacy.

Immensely successful, the film is widely credited with spurring a new version of the Ku Klux Klan that emerged later that year.

William Simmons, a former minister and paid organizer for fraternal orders, launched the reborn KKK with a ceremonial cross-burning atop Georgia’s Stone Mountain. The burning-cross ritual stemmed more from “Birth of a Nation” and the 1905 novel than from original Klan practice.

Simmons owned the new hate group as a private business, and appointed himself “imperial wizard.” But his venture failed to get much traction.

In 1919, Simmons had to pay 20 Blacks to don white robes in order to stage a fake “veteran’s parade” of Klan members, wrote Linda Gordon, author of the 2017 book “The Second Coming of the KKK.”

Simmons hit pay dirt in 1920, though, when he outsourced much of the management of his company to two public relations professionals, Elizabeth Tyler and Edwin Young Clarke. They earned 80% of any revenue they could raise from member fees and dues.

“They set up this pyramid scheme. It was just a money-making machine,” says David Horowitz, who has written widely about the Klan, and teaches U.S. cultural and political history at Portland State University

Under Tyler and Young’s tutelage, the Klan grew exponentially, hiring recruiters to work on commission across the nation.

The new Klan billed itself as patriotic and law-abiding, skillfully exploiting anxieties of that era. It quickly attracted 2 million members, equivalent to 6.3 million in today’s U.S. population.

After World War I ended in 1918, the nation turned inward, wary of foreigners. A devastating flu epidemic in 1918-19 caused 675,000 American deaths, many of them children and healthy adults.

The 1917 Bolshevik Revolution in Russia led to a hysteria against left-wing radicals here, many of them immigrants.

A decades-long surge in immigration from Eastern and Southern Europe had increased the number of Catholics and Jews, providing cheap labor for America’s burgeoning sweatshops and other factories. At the time, many Americans didn’t consider Italians, Jews and Greeks to be “white people.”

For Protestants, “you had this huge wave of immigration of people who seem to be not quite like us,” says Jeff LaLande, an archaeology and historical consultant in Talent, Oregon, who has written about the Klan in Southern Oregon.

The Klan preached a philosophy of “100 percent Americanism,” exploiting the growing anti-immigrant backlash.

“The second Klan took off by melding racism and ethnic bigotry with evangelical Protestant morality,” wrote historian Linda Gordon in her 2017 book, “The Second Coming of the KKK.”

In this time of social anxiety, Horowitz says, American men were flocking to join lodges, and the Klan benefited from that trend.

The Klan’s use of secret rituals, robes and parades also had a wide appeal people here, LaLande says.

Oregon also was fertile ground for the KKK’s message.

The state’s history of anti-Black policies and anti-Catholic sentiments stretched back to when the first white pioneers settled here, displacing indigenous peoples.

“Prejudices against Negroes and Catholics were a part of the cultural heritage of these early pioneers,” Toy wrote.

In October 1921, the Klan held its first formal chapter meeting in Portland, at the Woodmen of the World Hall downtown.

Then on Dec. 22, the Klan staged a coming-out event, welcoming the general public to a gathering at Portland Municipal Auditorium (now called Keller Auditorium). Attendees paid 50 cents to watch a film depicting heroic Klansman and to hear a lecture by local pastor Ruben Sawyer titled “The Truth About the Invisible Empire of the Ku Klux Klan.”

The Rev. Sawyer told the audience the Klan didn’t see Jews as their enemies, only those who rejected the teachings of Jesus. Blacks had nothing to fear, he said, “just those who sow the seeds of racial hatred among Negroes by teaching social equality.”

And the Klan wouldn’t fight the Catholic Church, he said, unless it injected itself into the state.

The next day, Baker announced that, on the heels of a 41-person reduction in the police force, he was forming a 100-man vigilante squad to augment the Portland police department. The men would get guns and badges, and Baker would consult with “patriotic orders” to find recruits, wrote Malcolm Clark Jr. in a 1974 academic paper for Oregon Historical Quarterly.

“An overwhelming majority of those chosen would be Klansmen.”

Coming up in Part 2: The Klan takes over state politics in 1922