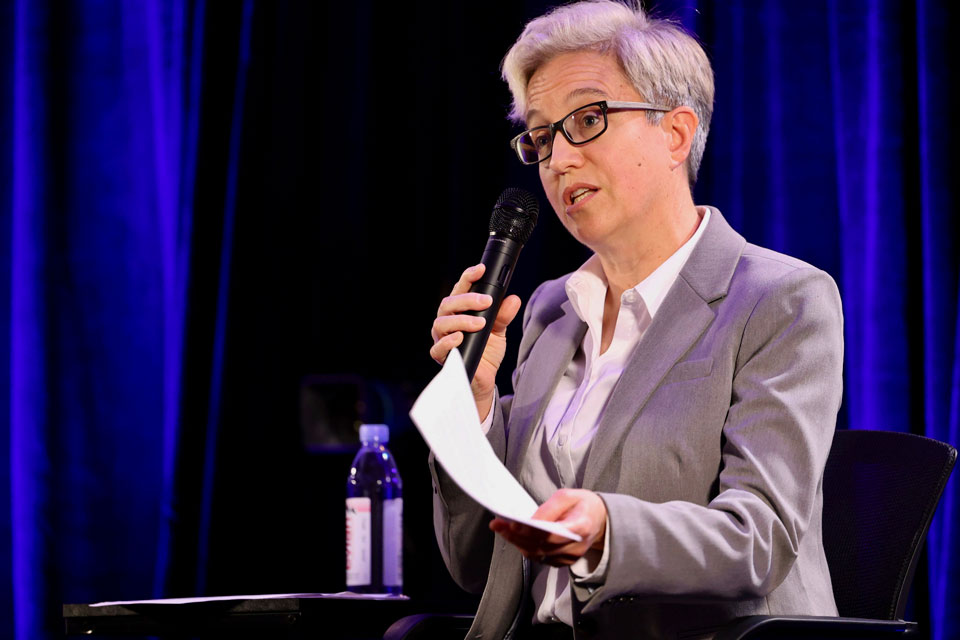 SALEM, Ore. (AP) — Oregon is typically known as a bastion of West Coast liberalism, where Democrats are easily elected and a Republican hasn't served as governor since the early 1980s.

But with an unusually competitive three-way contest for governor, the Democratic candidate's success is hardly a guarantee this year. As mail-in ballots become available to voters next week, Oregon is becoming the unlikely site of one of the most competitive governor's races in the country.

The main reason for the race's unpredictability is Betsy Johnson, a longtime former Democratic lawmaker with a fondness for salty language who is aiming to become the first unaffiliated governor elected in Oregon in almost a century.

Polls show Johnson with double-digit support, and Democrats have called her a spoiler who is taking votes from their nominee, Tina Kotek — and could lead to a GOP victory. Her bid has been aided by GOP donor and Nike co-founder Phil Knight, who donated at least $3.75 million to Johnson's campaign before giving $1 million in recent weeks to Republican candidate Christine Drazan.

The tight contest between Kotek and Drazan, with Johnson trailing, has caught the attention of the White House. On Friday, President Joe Biden will visit Portland to campaign with Democrats and urge voters to back Kotek.

It's an unexpected bright spot for the GOP, with the Republican Governors Association last week sinking another $1.5 million into the state in hopes of replacing Democratic Gov. Kate Brown, who is term-limited. Oregon is considered a toss-up race, alongside contests in the traditional swing state of Wisconsin and in Kansas, where Democratic Gov. Laura Kelly is seeking reelection in a conservative state where she beat a flawed candidate four years ago and now faces Republican Attorney General Derek Schmidt.

Kotek emphasized that a lot is riding on this election.

“The race for Oregon’s governor this year is more consequential than ever,” Kotek, a former state House speaker, said this week.

Republicans say Oregon voters are frustrated by issues like homelessness and crime and are ready for a change. Drazan, Kotek and Johnson — who all served in the Oregon Legislature — each say curtailing homelessness will be their priority if elected governor.

“We must move people from chronic homelessness to stability and restore safe streets and neighborhoods again,” Drazan said in an email Tuesday.

Republicans argue that Democrats have moved too far to the left, backing policies such as curtailing greenhouse gas emissions which conservatives say will harm working-class Oregonians.

Efforts to pass a cap-and-trade bill spawned a resistance group called Timber Unity, which staged protests around the state Capitol in Salem in 2019 with horn-blaring big rigs. Timber Unity has endorsed Drazan.

But the group’s rallies have attracted backers of QAnon and right-wing militia. Timber Unity’s spokeswoman was present at the Jan. 6 insurrection at the U.S. Capitol.

Kotek responded to the Drazan endorsement by tweeting: “The last thing Oregon needs is a governor who shares ties with election deniers, Capitol rioters, and white supremacists.”

Drazan shot back that Kotek was “slandering the very Oregonians you’re running to represent as governor.”

In 2020, Oregon voters approved a ballot measure to decriminalize hard drugs and dedicate millions of dollars to addiction treatment. The program has had a rocky start, with addiction rates among the country's highest and delays in channeling funds to treatment programs.

Drazan supports asking voters to repeal it. Johnson said she would also work to repeal what she called a “failed experiment.” A spokeswoman for Kotek said "Oregonians do not want to go backward.”

Arizona Gov. Doug Ducey, chairman of the Republican Governors Association, said Democrats are facing voter dissatisfaction with sometimes violent civil unrest in Portland and what he described as “very zealous” lockdowns during the COVID-19 pandemic.

Kotek and the Democratic Governors Association have noted that both Drazan and Johnson have “A” ratings from the National Rifle Association. Johnson proudly talks about being a gun owner — she even owns a submachine gun — and supports the Second Amendment.

The Democrats also criticized Drazan, a former minority leader in the Oregon House, for helping lead a walkout of GOP lawmakers to block the Democrats' climate change bill. Drazan “sided with the far-right by shutting the door and walking away from her taxpayer-funded job,” DGA spokesman Sam Newton said.

Democrats warn voters that a Drazan victory could threaten abortion rights, environmental protections and democratically-run elections in the state. They are hopeful that voters who consider supporting Johnson, who is for abortion rights, will opt instead to back their candidate.

“Oregon is in real danger of electing an anti-choice Republican as our next governor," said An Do, executive director of Planned Parenthood PAC of Oregon, adding that a vote for Johnson would only help Drazan win.

Johnson dismisses that kind of talk.

“I am not the spoiler candidate,” Johnson told members of the Oregon Coalition of Police and Sheriffs at a campaign appearance in Salem on Tuesday. “I am in this to win.”

Johnson, who was in the statehouse for 20 years, quit the Democratic Party in 2021 to run as an unaffiliated candidate for governor. If successful she would be the first female unaffiliated governor ever in the U.S.

Johnson got on the ballot by delivering some 48,000 voters’ signatures to elections officials, with the help of a signature-gathering company that was paid almost $900,000. Johnson led Kotek and Drazan early in fundraising, with help from Knight.

“I won't defund or demonize the police, but will demand professionalism from anyone in a uniform,” Johnson told them.

Humphrey, who lives in Johnson's old state senate district, said he was already in Johnson's corner because she's “no nonsense” and gets things done, like facilitating the building of a new county jail.

“Betsy Johnson, when she was running as a Democrat, is the only Democrat I’ve ever voted for in 28 years of voting,” Humphrey said.

Johnson is hoping to woo centrist Republican and Democratic voters and the biggest slice of Oregon's electorate: the 1 million unaffiliated voters whose numbers slightly edge registered Democrats and are 40% greater than the number of registered Republicans.

Democrats are worried about that.

“The presence of Betsy in the race really shifted the votes so there’s sort of a group of Democrats and some Republicans that are supporting Betsy Johnson," said former Oregon Secretary of State Bill Bradbury, a Democrat supporting Kotek. "And that obviously creates quite a problem.”