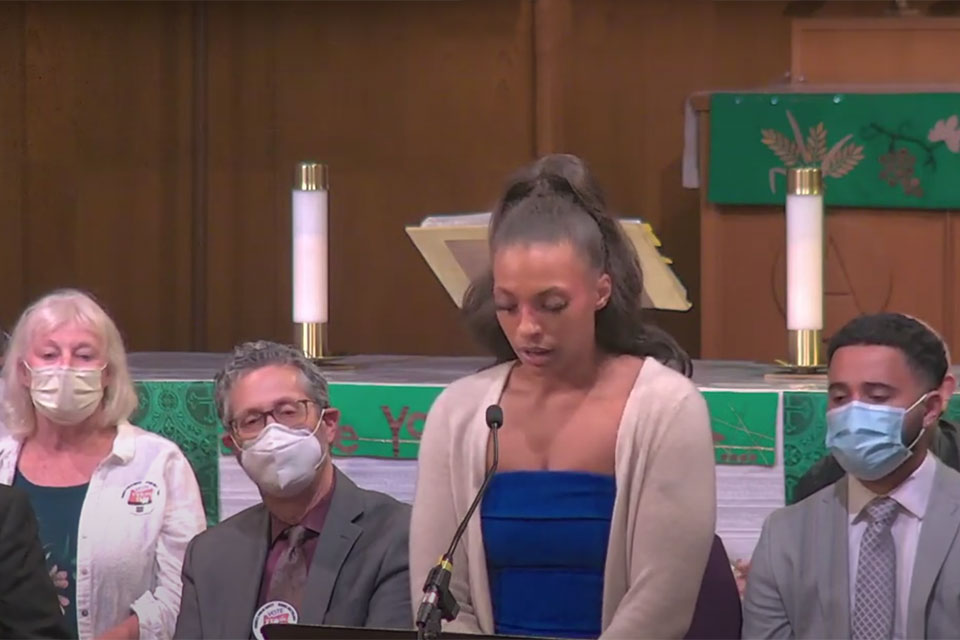 An interfaith coalition has launched a ballot measure to curb gun violence through two practical safeguards.

In November, Oregonians will have the opportunity to vote on Measure 114, which will require law enforcement-issued permits to purchase any firearm and which will restrict the purchase and sales of magazines that hold more than 10 rounds.

In order to obtain a permit to purchase, applicants would be required to pass a background check and to attend and pass both a firearm safety training class and a live-fire training session.

Violating the law would be a misdemeanor, upgraded to a felony if the violator has any prior criminal convictions.

Currently, the group argued, weak Oregon gun laws allow purchasers to obtain guns before completing background checks. This has led to thousands of guns being released to people who ultimately failed such checks.

Rev. LeRoy HaynesTo kick off the campaign, leaders from a range of spiritual communities and gun control activists and organizations gathered with gun violence victims to share both data and trauma.

“In the state of Oregon, when you’re hunting large game like elk, you’re limited to five rounds in a magazine and one in the chamber,” Penny Okamoto, executive director of Ceasefire Oregon, told those gathered at Augustana Lutheran Church last week to announce the measure. “But the Bend shooter had four magazines that held 30 rounds, and there’s no limit. He could have had 50 rounds. There’s no limit. So what we do in Oregon is we have more compassion, we protect a herd of elk from gun violence, more than we do a classroom of kids. And that’s going to stop when we pass Measure 114.”

The event was hosted by Lift Every Voice Oregon, which worked with volunteers to gather more than 161,000 signatures to get Measure 114 on the ballot.

“We want to do this with respect, the most high-road campaign you can imagine,” Knutson said.

Speakers testified about how gun violence had made indelible impacts on their lives. Teal, a 24-year-old single mother and activist, described how she no longer feels safe even at work.

“I witnessed a coworker right next to me get shot in the thigh,” Teal said. “The bullet was just a few inches away from my head. The smell of gunpowder stayed with me, and I will never forget the smell or the sight of so much blood. Nor can you ever truly dismiss the feeling that your life almost ended, and that you are in danger in public places where you should feel safe.”

Activist and mother Teal experienced gun violence at work, witnessing the shooting and injury of a coworker. Melay Ramos, 20, described the trauma of seeing her brother shot in the heart and having to shoot the fighter off herself in a Portland hotel room. Her brother later died in her arms as she was trying to get him help.

Linda, a Portland resident, spoke of her anguish as the mother of a woman who was able to purchase a gun and complete suicide, despite a long history of psychiatric hospitalizations.

“Gun violence is destroying our country,” Rabbi Michael Cahana, a chief petitioner on the measure, said. “Too many people have been convinced that there’s nothing that can be done, that it’s just the way it is. But we don’t believe that. We don’t believe this is the world God made for us. This is the world that human beings have made, where we’ve said weapons are more important than children; gun rights are more important than the rights of people to live at peace. We do not believe that. The minute these laws are passed and enacted, we’re going to be saving lives.”

Rev. Anthony Lathan spoke of how his military background informed his stance on gun control.

Rev. Anthony Lathan“During the day I’m a mental health provider,” Lathan said. “But there was a time in my life I was known as Sgt. Lathan… I trained to use terrible weapons. I trained to do that so you can all be free. So that you, my grandmother, my mother, my children, could walk without threat of molestation of a gun. After my time in service, I got out and I was shocked, to put it mildly. The streets weren’t safe. The streets weren’t safe for everyday people.

“We all want freedom. We want freedom to walk down the street, to drive our cars, to not worry about our children – and Uvalde, Sandy Hook, all the different places where our children have been molested by guns, and molested by the gun lobby. We all want to be free. One of the many ways that we will have that freedom that we all long for is to get behind this simple measure that does not take away anyone’s constitutional rights, it does not ask you to be painted like a zebra, it doesn’t ask that you somehow become less of a citizen. It asks that you become more caring. It asks that we have some regulations and some guidance around the possession and use of weapons.”

Other speakers emphasized sobering statistics about the rise of gun fatalities both nationally and in Portland, and of the disproportionate damage it has done to the Black community.

“Homicide is the leading cause of death among Black boys and men, ages 15 to 34,” Liz McKenna, legislative team member at Lift Every Voice Oregon, said. “Specifically in Oregon, for the period 2000-2020, the rates of firearm homicide victimization are eight times higher among non-hispanic Black people, twice as high among Native Americans, 77% higher among Hispanic people, than they are among non-Hispanic whites.”

But statistics also support the efficacy of Measure 114, supporters argued, pointing out that simply limiting gun availability to purchasers who pass background checks can have a profound impact on fatalities.

Okamoto noted that limiting magazine capacity has proven essential in stopping mass shootings, as perpetrators are forced to stop and reload more frequently.

“When that shooter had to stop and reload at Sandy Hook, 11 kids got away,” she said.

Okamoto reiterated that current gun policy is often at odds with the overwhelming will of the majority.

“What we have on our side is we have incredible stories of truth, and we have data and statistics and we know that this is evidence-based and it will help.”

In anticipation of fierce opposition from well funded gun interest groups, the Measure 114 coalition has begun to fundraise for its campaign.

Pastor LeRoy Haynes noted the significance of the proposed law.