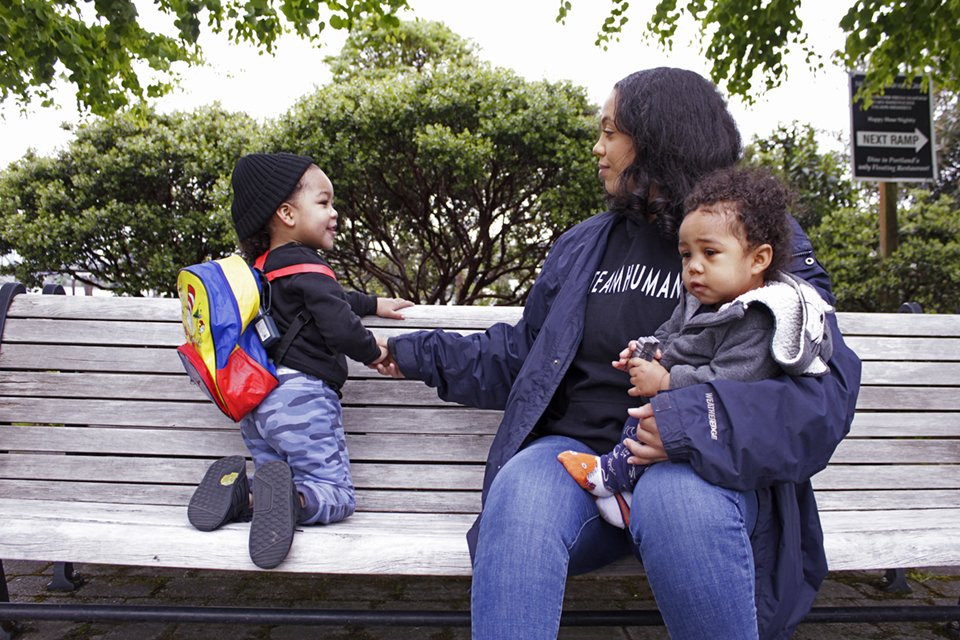 Single father Billy Price was already struggling to make ends meet before someone broke into his Michigan storage unit, stole his identity and ruined his credit.

Price filed a police report, and then tweeted about it to Bill Pulte, a multimillionaire who he'd heard uses Twitter to give money to those in need.

“They took nearly everything, including everything that my grandpa gave me before he passed,” Price tweeted last month, only to be met with silence. “On top of that we’re about to be homeless, it’s like the weight of the world. Please help us.” 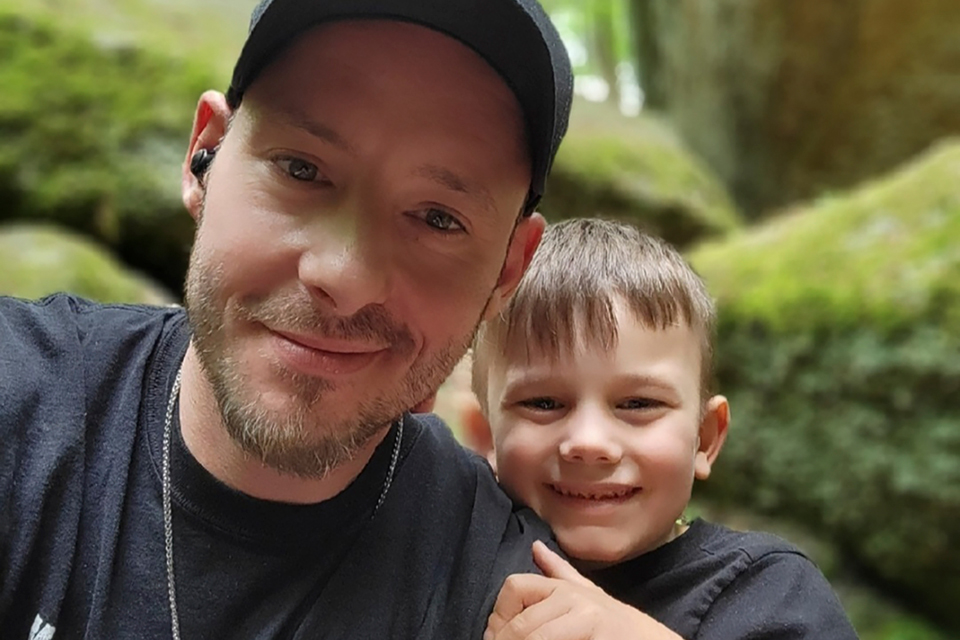 twitter philantheopy price This 2021 photo provided by Billy Price shows him and his son, Maddox in Ohio. Price was already struggling to make ends meet before someone broke into his Michigan storage unit, stole his identity and ruined his credit. He filed a police report, and then tweeted about it to Bill Pulte, a multimillionaire who he'd heard uses Twitter to give money to those in need. (Billy Price via AP)

Price, 35, recently moved from Illinois to Michigan to maintain joint custody of his 5-year-old son Maddox. Price is living at an extended stay Kalamazoo hotel while he searches for a place to live, but he's worried that between his bad credit, his dwindling savings and his lack of employment he won’t qualify for anywhere that isn’t a “slum.”

“I really don’t want that for my son,” said Price, who lost his landscaping job during the pandemic and has relied on odd construction jobs and day-trading cryptocurrency to make money over the past year.

Practically every minute of every hour, someone sends a tweet to Pulte, a 33-year-old private-equity investor and heir to the mammoth PulteGroup homebuilding company.

A grieving mother needs $800 to retrieve her young daughter’s ashes. A Texas man needs help paying off more than $60,000 in credit card debt. A family of four is about to lose its house.

People send photos of their eviction notices, tearful videos of their empty refrigerators, screenshots of the paltry sums they have in their bank accounts.

And, nearly every day, Pulte responds. He gave $500 to a man who sent a video of his missing teeth. He gave $125 for a woman to pay for gas so she could make the long drive to her brother’s funeral.

It’s all part of what Pulte calls “Twitter philanthropy” – a concept of direct giving in which Pulte and others offer immediate financial support to a tiny percentage of the thousands who reach out every day over social media.

“I call them hand-ups, not handouts,” said Pulte, who has grand visions of disrupting the traditional philanthropy model by using social media to help form an online army of donors to help people in crisis.

For Timi Gerson, vice president and chief content officer at the National Committee for Responsive Philanthropy, Pulte’s generosity is laudable, but she said it’s turned into a “grotesque Hunger Games” in which desperate people compete to get noticed while struggling to survive in a “broken system” that has “deeply unequal access to health care and housing and services.”

Online direct giving is nothing new – for years, people have used sites like GoFundMe to get money for medical expenses, funeral costs and other unforeseen bills.

But Pulte’s approach is nearly instantaneous. Within seconds, on a whim, he can send a follower life-changing money: his largest single donation so far is $50,000, according to his records of the more than $1.2 million he has spread among more than 2,200 followers over the past three years. In that time, his follower count has skyrocketed from around 35,000 to 3.2 million.

Gerson appreciates the “immediacy and the transparency” of Pulte’s approach but she said it’s ultimately far too little to achieve meaningful change, comparing the situation to the old tale of the Dutch boy who kept his finger in a leaking dike to try to prevent his town from flooding.

“Endless fingers in the dike aren’t going to solve anything if the dam wall is crumbling. You’ve got to fix the structure,” Gerson said. “If you want to effectively solve the deeper problem, you’ve got to fund groups and organizations that are looking at things systemically.”

Pulte agrees that systemic change is needed, but bristles at the notion that government and giving to large philanthropic organizations is the answer, saying such approaches come with large overheard costs, as well as “corruption, fraud and abuse.” The very fact that so many people are reaching out to him is proof that not enough action is being taken, he said.

“Government should be doing it,” Pulte told the Associated Press. “But in the absence of government, we have to step up and help people who are dying of cancer, who can’t afford their diabetes insulin pump, who don’t have teeth.”

And it isn’t always Pulte who is fronting all the money. He also works with TeamGiving.com to promote causes – often medical procedures – that his own followers, members of #TeamPulte, can rally behind and chip in to help. 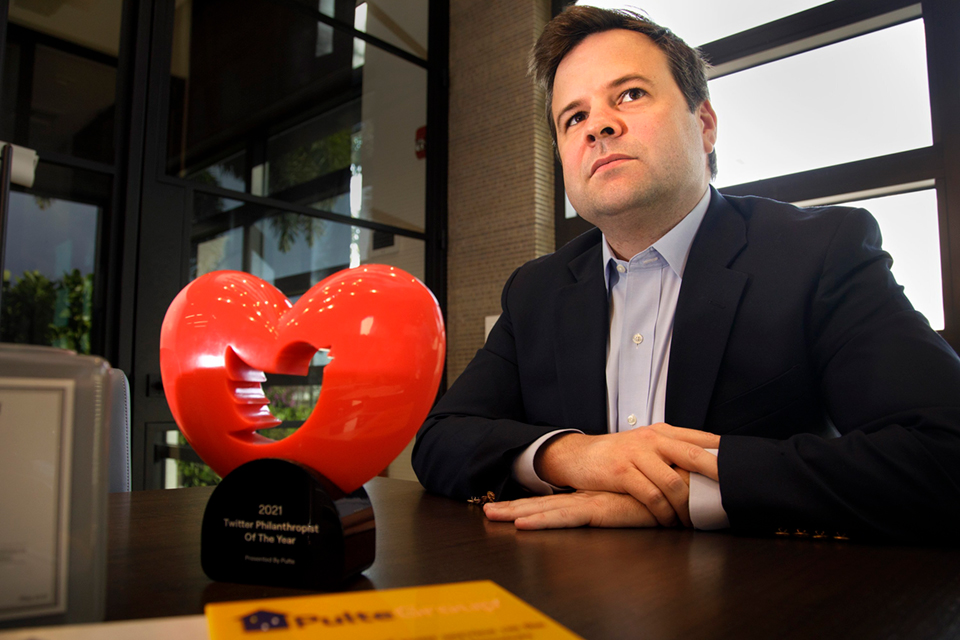 Bill Pulte with the Twitter Philanthropist of the Year trophy as he is interviewed in his offices in Boca Raton, Florida Monday, Dec. 13, 2021. Pulte has spearheaded “Twitter philanthropy” – an approach to direct giving in which Pulte and others offer immediate financial support to people who reach out every day over social media. (Lannis Waters/The Palm Beach Post via AP)

In the long term, Pulte said he is trying to build a huge network of donors in which the TeamGiving community can vote on where to aim funds.

“I think that that in many ways could be just as good, if not better than Social Security or Medicaid,” Pulte said, although he admits, “I haven’t figured that out yet.”

“The biggest thing I want to solve is how do I make it a movement that’s sustainable beyond me? Because I’m just one person. I’m just one millionaire. I’m not able to solve all the issues.”

One person Pulte has helped is Callie Coppage, a 32-year-old single mother who tweeted a photo of herself and her infant son to Pulte on Feb. 27, saying she had just left an abusive relationship and needed support for her two kids.

The next day, as she was braiding hair inside her home, $7,000 suddenly arrived from Pulte via Cash App.

“It felt like I had a godparent who had just swooped in and helped my life get back on track, saying, ‘Here, I’m going to look out for you,’” she told the AP.

Coppage said she immediately put the $7,000 to use, paying off insurance bills, buying a better car – she said her ex took her old one – as well as new car seats and shoes for her kids.

But as overjoyed as she was to receive the money, Coppage said she also was greeted by the dark side of Twitter philanthropy. Her Cash App was immediately inundated with messages from strangers requesting money — an experience that Coppage said made her empathize with Pulte.

“There was a point where I kind of felt a little bit greedy because I wanted to help, but, knowing my circumstance, $7,000 was just the perfect amount that I needed – it wasn’t as if I’d won $1 million. And then how do you even choose?"

Pulte said a few volunteers help him sort through the countless requests he gets each day.

He admits that some of the recipients are probably scammers, but says he and his team work to try to ensure that he’s sending money to people who really need it.

“We’ve gotten a lot better at understanding who is for real and who is not,” said Pulte, who said a traditional charity might spend 20% or 30% on overhead. “If we help 90% of people and 10% of them are scams, I’ll take those odds any day.”

For Price, he continues to regularly tweet his story to Pulte, even though the only responses he ever receives are from scammers trying to trick him into revealing his bank information. He's also applied for various government housing loans — he says there's a huge waiting list — and started a GoFundMe page, though that too has yet to gain traction.

“My focus has been on getting out of this struggle," Price said. "And when all of your focus goes to that, you know, how can you enjoy your life? That’s not a life you want to live.”