VANCOUVER, Wash. (AP) — Authorities have arrested three people in connection with the fatal shooting of a Clark County sheriff's deputy.

The Columbian reports that 46-year-old Detective Jeremy Brown was shot in his vehicle late Friday while conducting surveillance at a Vancouver apartment complex. Brown was a 15-year veteran of the sheriff's office. 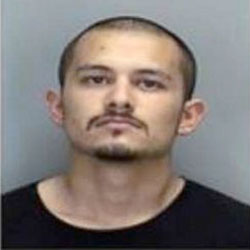 Police say three people were seen fleeing the area after the shooting. Their vehicle crashed near Padden Parkway and Interstate 205, and the three suspects ran, investigators said. Raya-Leon and Misty Raya were arrested after a large manhunt.

According to an arrest warrant affidavit obtained by The Columbian, witnesses told investigators that Guillermo Raya was paranoid that police were following him and confronted Brown as Brown sat in an unmarked SUV.