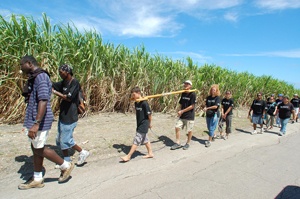 This month, in just nine days, the 5th Annual African American Film Festival will screen more than 40 feature-length and short films by independent filmmakers. The films include documentaries, film shorts, animation and narratives at the Langston Hughes Performing Arts Center.
"Our goal for each year is to present a wide, and as honest, a variety of portrayals of Black life as possible," said Zola Mumford, festival curator. "People of African descent are doing all sorts of interesting things all over the world; and this little gem of a festival invites audiences to learn and expand their view of the African experience."
Festival-goers also can take hear from filmmakers and critics at panel discussions, readings, workshops, special screenings for seniors and youth, youth film showcase and question-and-answer sessions. The festival includes established filmmakers from around the world as well as new faces, and will feature 34 Seattle premiers, 16 shorts, 15 narratives, 14 documentaries and 3 world premiers.
Several filmmakers this year are local including Michael Lienau, Gilda Sheppard, Eddie Smith and Anastacia (Stacey) Tolbert.
Tolbert's film, "Got Breast?" is a documentary about breast, body image, beauty ideals, and positive and negative feedback about breasts. "Got Breast?" will be shown 4:30 p.m., Friday, April 18.
Tolbert wrote, co-directed and co-produced the film with Annie Walsh. She said she got the idea, after writing an article about breast and body issues and thought the issue needed to be discussed more.
"I wanted women of different ages, races and cultural backgrounds would dialogue and discourse about self-esteem issues," Tolbert said. "I also did the documentary in the hopes that teen girls will watch it and it will help them with their self-esteem, growing up and becoming a woman."
Tolbert said she was surprised that when she started showing the film, women would tell her they really needed to see the film. She said it really caused them to dig deeper and have those conversations they normally wouldn't have.
"Breasts are always sexualized as opposed to being seen as a beautiful part of the body."
The documentary will be shot in four segments: a Midwest segment, a West Coast segment, East Coast segment and a Southern segment. The screening that will be shown Friday is the mid-west section and Tolbert says she will be looking for interview participants to begin filming the West Coast segment this July.
Tolbert is a writer, journalist, playwright, and Seattle Arts Lectures Writer-in-Resident. She works with the Writers in the Schools program, teaching at Meany Middle School and Global High School. She also manages the Hugo House Youth site. Tolbert's writing, nominated for the 2007 NAACP Award, has been published in Essence Magazine, The Source Magazine and The Nubian Chronicles and in anthologies.
Eddie Smith will premier two films he wrote and directed. "Behind Closed Doors," is a murder mystery about a Black professor accused of murdering one of his students, and a White woman with whom he had an affair. The jury discussion then turns to into a bitter dispute about racial authenticity. The film was inspired by the classic "Twelve Angry Men," and the O.J. Simpson trial, Smith said."
"I wanted to give it more of a modern feel to it and make something more provocative that would keep people's attention," Smith said. "Imagine the conversations that went on in that courtroom."
Smith plans to attend the screening on 7 p.m., Friday, April 17.
His second film, "Man II Man," is a psychological drama. Both films were shot in Seattle using local actors from the Seattle Acting School. Smith is currently working on writing a feature-length screenplay for "Man II Man" and another short film that he plans to direct.
Gilda Sheppard is a professor at Evergreen State College Tacoma Program where she teaches sociology, cultural studies courses and media literacy. Her film, "Women Together as One," is a documentary about Liberian women refugees who live at the Buduburam Refugee Camp in Ghana, West Africa, and child soldiers. "Women Together as One," was the first film selected for showing by the Fest Afrique 360 at the 2007 Cannes Film Festival in France.
Sheppard filmed the documentary in 2006 during a year-long visit to the country.
"They wrote their memoirs in the literacy class which was a healing process because they talked about the horrors and killings of their children, and the women shared with one another," Sheppard said.
Sheppard is now working on a film about young people who are disenfranchised. She also is investigating the impact on young people of the controversial gang bill, recently signed by Gov. Gregoire.
"I think that's what's happening with our young people is that they've become child soldiers in our street," Sheppard said. "They've been abandoned not by war but by poverty and a poor educational and heath care system so I think society, sociality problems has abducted them just like war has abducted these women, our children have been abducted by our social problems."
Also showing in the festival is "Black August," directed by Samm Styles. The film looks  at the Black Panther movement in the late 1960s and early 70s, its impact on prisoners across the country and in organizing the outside communities.
Another film, "Yokes and Chains," is documentary about a Camano Island family who has traveled around the country to apologize for slavery. The family also visit historic slave ports on Caribbean islands, Africa and England to say they are "so sorry." Local filmmaker Michael Lienau will be in attendance at the screening, 4:30 p.m., Monday, April 14.
The 5th Annual African American Film Festival runs from April 12 to 20 at the Langston Hughes Performing Arts Center, 104 17th Ave. S.  For a complete list of films, visit www.langstonblackfilmfest.org.