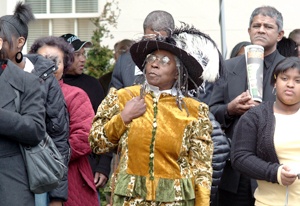 After several decades, the dream for an African American museum has finally been realized.
Hundreds of people showed up for the grand opening of the Northwest African American Museum on March 8 in the former Coleman School, 2300 S. Massachusetts St., in Seattle's Central District.
The grand opening celebration kicked off with a ribbon-cutting ceremony, live music, children's art activities and concluded with free public tours. Some of the dignitaries included Gov. Christine Gregoire, Seattle Mayor Greg Nickels, former Seattle Mayor Norm Rice, King County Executive Ron Sims, King County Councilman Larry Gossett, U.S. Sen. Maria Cantwell and Jim McDermott. Joyce Taylor, anchor from KING 5 TV, emceed the event.
"Finished at last! Finished at last!" exclaimed museum executive director Carver Gayton. "The idea of this museum started more than a generation ago and with a number of different groups and people, we finally got this done."
The three-story school building, built in 1909, was closed in 1985 when Interstate 90 was expanded. By November, local activists moved into the building demanding it be turned into a museum and community center. After eight years of occupation, the school district agreed the building would become a museum. Years passed while disagreements abounded between two groups who claimed they represented the museum. Finally, in 2003, the Metropolitan Urban League of Seattle, under the leadership of its CEO James Kelly and the board of directors, purchased the old Coleman School for $800,000 from the Seattle School District.
"This is your museum!" said Barbara Thomas, museum curator. "This is a gathering place for the entire Northwest community, a place of African American history, culture, arts and tradition."
Before the program started, local activist Kwame "Wyking" Garrett, the son of Omari-Tahir Garrett who was one of the activists who took over the school in the mid-80s, took over the microphone and told the crowd "This is a disgrace, it's not what we sacrificed our lives for, this is a scam," the crowd booed and Garrett was escorted off the stage by police. A young protester held a sign reading "Not in Our Name," and another held a sign saying, "4 Youth? Is it really for youth?"
The 19,000 square-foot museum is located on the main floor while the two top floors have 36 apartments for medium income families. The museum houses three galleries: The Northwest Gallery, the Journey Gallery and the Multi-Purpose Gallery.
The Northwest Gallery, the largest at 2,400 square feet, will house temporary exhibits featuring paintings, photos and tools used by prominent northwest artists Jacob Lawrence and sculptor James W. Washington Jr., early pioneers, cultural icons and community leaders.
The Journey Gallery features artifacts such as a slave collar, and houses long-term exhibits. It will tell the story of how African Americans arrived in the Northwest starting in the late 1700s.
The Multi-Purpose Gallery will host a variety of exhibits, lectures and performances.
In the Multimedia Learning Center, people will be able research local Northwest history and trace their own roots. Two other rooms will be artists' studios and additional rooms will be available for meeting space, programs, activities, lectures and workshops.
The museum will also feature interactive displays, personal memorabilia from prominent Northwest African Americans, exhibits, artifacts, photographs, gallery talks, docent-led tours, educational workshops and more. It also has developed an artist-in-residence program that will highlight African American artists and will show their work and give public lectures and workshops.
The museum will have a Youth Docent/Curator Program where youth will give tours of exhibits as well as work with professionals to create their own exhibits. The museum also houses a cafe and gift shop, as well as their administrative offices.
To keep the visitors returning, the exhibits and activities will continually change. Future exhibits include "East by Northwest," an exhibit exploring the story of East African immigrants to the Pacific Northwest.
The NAAM grand opening week celebration offers free admission through March 16.
After that, admission will be $6 for adults, $4 for students and seniors, and free for children under age 5. The NAAM is open Wednesday through Sunday and free admission is offered the first Thursday of every month.
For more information, call the NAAM at 206-267-1823.