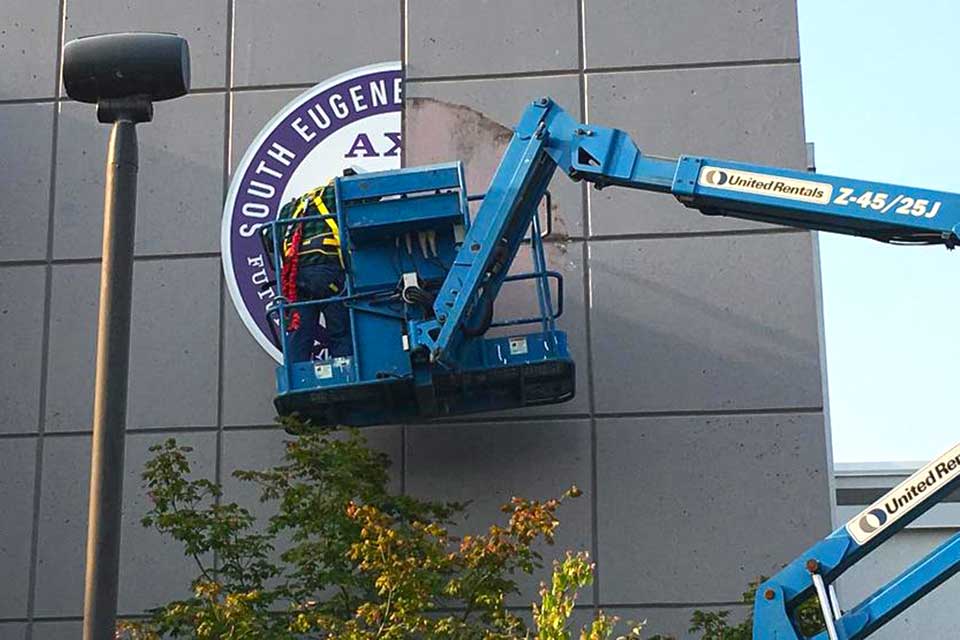 EUGENE, Ore. (AP) — South Eugene High School's new team name, the Axe, became a little more official this week — at least from the outside of the building.

Crews on Monday replaced the former "Axemen" seal that adorned the front of the building with an updated "Axe" sign. The team name change was announced in February after some said that the Axemen name, which dated back more than 90 years, was sexist and excluded those who don't identify as male.

District spokeswoman Kerry Delf said Monday that the outdoor moniker change is just one of many that already have taken place at the school. Indoor wallpaper that features the old Axemen name has been removed, and banners in the gym have been updated or are in the process of being updated.

About two-thirds of the school's team uniforms featured the Axemen name and will be replaced, including 120 men's and women's cross-country singlets. The singlets will cost the district about $2,250. It's unclear exactly how many team uniforms across all sports are being replaced.

"It takes a lot of lead time to get new athletic uniforms," Delf said.

Most uniforms were not immediately updated, with the exception of the softball team. The new uniforms will feature either "Axe" or "South Eugene."

"Uniforms and many other materials would be replaced or replenished over time, regardless of this change," Delf said.

Other school materials and items that have been or will be replaced include school letterhead, class ring designs and graduation certificates.

Historical items such as yearbooks and trophies will not be changed retroactively, according to Delf.

The school colors, school symbol and other aspects of the brand will remain the same, despite the name change, Delf said.

It's unclear how much the entire replacement process will cost the district. The sign alone was $986.

Consideration of a potential name change began after a formal complaint was filed with the district in October.

Constance Van Flandern, who has two children in the Eugene School District, contended in her complaint that the Axemen team name was discriminatory and violated Title IX. Enacted by Congress in 1972, Title IX bans gender discrimination in education programs that receive federal money.

Van Flandern asserted that referring to the school's teams and student body as the Axemen "promotes boys and boys' teams and boys' emotional well-being over the girls' teams, athletes, events and conscious and subconscious understanding of their place in a culturally unequal hierarchy."

A petition to change the name circulated among South Eugene High families and students last fall and winter, which gathered more than 200 signatures and prompted the district to consider the change. A counterpetition to keep the Axemen name also was started. It gathered nearly 4,000 signatures.

Before changing the name, the district gathered thousands of comments from community members, South Eugene alumni, and current South Eugene students, parents and staff. An online district survey that asked respondents to identify why the district should change or keep the Axemen name also garnered about 4,000 responses.

Public testimony was presented on the topic at a Jan. 31 forum at the high school, as well as comments gathered from thousands of emails, letters, phone calls, op-ed pieces, letters to the editors, unofficial opinion polls from the student body and personal conversations with members of the school community, as well as the community at large were also considered by district staff.

The push for a new team for South Eugene High has a history that stretches back more than 30 years.

In 1987, Eugene School Board member Sue Miller, now Sue Miller Wielesck, pleaded with the seven-member board to do away with the "sexist team name."

Wielesck, who spoke in favor of changing the team name at the Feb. 7 forum, said in 1987 that all four of the district's high school team names should be evaluated for potential change because they all have "male only or white northern European connotations."

All seven board members at the time agreed that it might be time to discuss the team names of all four high schools, but changes were never implemented.

Only a handful of high schools in Oregon have gender-based mascots or team names, including the Astoria High School Fishermen, the Grants Pass Cavemen, the C.S. Lewis Academy Watchmen, the Benson Polytechnic High School Techmen and the Sherwood High School Bowmen.

Oregon had 247 high schools in the 2016-17 school year. Almost all of the schools are represented by animal mascots.

Information from: The Register-Guard.