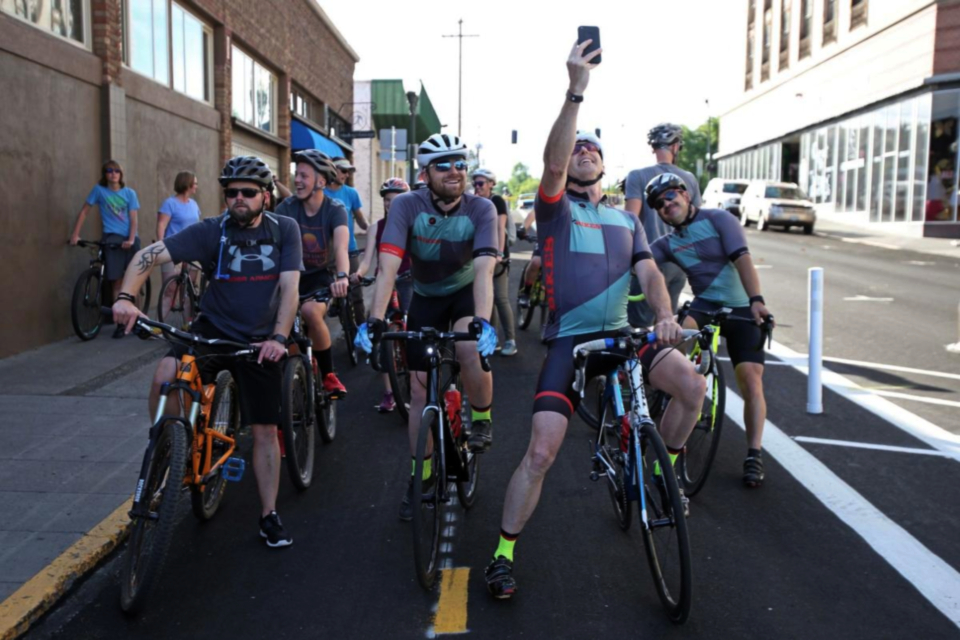 "Are you putting those up or taking them down?" asked a woman as she drove down Ninth street.

"Putting up!" Stewart Decker shouted back as the car continued down the road. The interaction was spurred by the fact that Decker and a number of other cyclists — who are decidedly in support of the new protected bike lane — spent their Thursday evening attaching flags to the protected lane bolsters and picking up trash along the route. Throughout the night they were met with thumbs up and shouts of support for the act.

This demonstration was part of a movement among Klamath Falls cyclists who had been dubbed the "Spandex Mafia" in a Herald and News Letter to the Editor drafted by Klamath Falls City Councilman Bill Adams earlier in the month, where he wrote, "Can you believe it happened, right here in Klamath Falls? That's right the 'Spandex Mafia' has gained a foothold here." Adams borrowed the term from Portland talk show radio host, Lars Larson of the Lars Larson show. "I just figured it was more of a shock factor, and a lot of the conservatives around here would recognize the terminology and understand what was going on," said Adams.

Decker, who uses the protected lane weekly, had only recently become familiar with the term. "Spandex Mafia is originally used as kind of negative or derogatory," he said.

"I think as with many historical derogatory terms were gonna just try and turn it on its head and say you know what, we do wear spandex from time to time, and if you want, call us a mafia but this mafia is gonna go around and put up American flags and give people gift cards to things."

The protected bike lane, which opened in June on Oregon Avenue and along Ninth street to downtown Klamath Falls, has been the subject of both praise and scrutiny from members of the community, but the term "Spandex Mafia" resulted in more than an inside joke or hurt feelings — it began a movement.

David Scott, owner of Rodeo's Pizza and Saladeria in downtown Klamath Falls, has since made bumper stickers that read "Spandex Mafia" and "Make America Bike Again Klamath Falls."  He explained that these stickers probably will not change minds, but might at least "disarm the silly label.

Scott also set up a "Spandex Mafia" GoFundMe page to generate goodwill between pro-bike lane citizens and residents along Oregon Avenue. The fund raised $1,462 in 11 days and was used to purchase gift certificates from local businesses for residents living within walking and biking distance of the bike lane. Now, any additional money donated will go toward bicycle equipment and services. "It's just a show of solidarity that, 'hey were willing to scramble a little extra to show that we care,'" said Scott.

Some certificates were for C&D Burger on Oregon Avenue. Sean Tucker St. Clair, a recent graduate of Klamath Union High School, has been working there for over a year. "I don't think it's affected people coming in here or anything like that," he said. "Originally I thought it would but I don't think it does." He has had people come up to him at work and mention their dislike of the lane, but hasn't noticed any difference in the day-to-day customers.

"The only thing it would effect is me as, like, a citizen driving or something like that. Even then I don't think it's that big of a deal," he said. "I think it's really cool seeing a bike lane like this. It encourages more people to do that kind of a thing."

These gift certificates were distributed by Katherine Pope, program director of Sky Lakes Wellness Center. She went door-to-door on Ninth street between Main and Lincoln streets reaching about 10 to 15 households. She hopes to get through the entire route in the coming weeks.

Pope was instrumental in making the bike lane a reality. "It was citizens working together to make positive change and that doesn't happen very often," she said.

"I am not a cyclist that wears spandex, but if I'm a part of a community group that likes healthy living, and riding bikes and wants to make riding bikes easier for people to do, then yeah I can be part of the spandex mafia."

During her walk, she asked people their opinion on the street's recent addition. Pope explained that many told her they were happy with the route or at least adjusting. Whether or not the residents were supportive, though, they were offered a gift certificate.

"I think raising awareness of it has gotta be good for everyone involved, I'd still like the thing taken out," said Adams.

Will the Lane Stay?

Adams, among others, has called for the reversal of the bike lane. The owner of One Stop Auto Wreckers, Adams believes the bike lane is dangerous for the trucks and larger vehicles his industry runs.

His son, Greg Adams agreed. "I think people running big equipment are gonna have the most problems," he said. "There's a couple spots that are really tight."

Bill Adams said, "I don't have a problem with people using bicycles, and I don't mind watching out for them. I just don't think they deserve to get the whole street ... What I have a problem with is taking away road space that was paid for by gas taxes and license fees on automobiles and trucks and turning it into a bike lane."

Pope hopes that, with time, the community will adjust to and appreciate the change. "I don't want to take away cars in Klamath but I want our town to be accessible for everyone. I want everyone to be able to share this community and get where they need to go," she said. "It would be a shame to remove something that one group doesn't want that so many people have worked for."

With a background in forestry disturbance interactions and geography, Scott believes that from a geographical perspective, having multi-use infrastructure in a town even one of this size makes sense. "I will say I'm pretty scared that we will lose the bike lane if we don't show enough support for it," said Scott. "Getting rid of the bike lane would be a toxic move and bad for this town.

"The bike lane doesn't take away anything from anybody, it really doesn't."