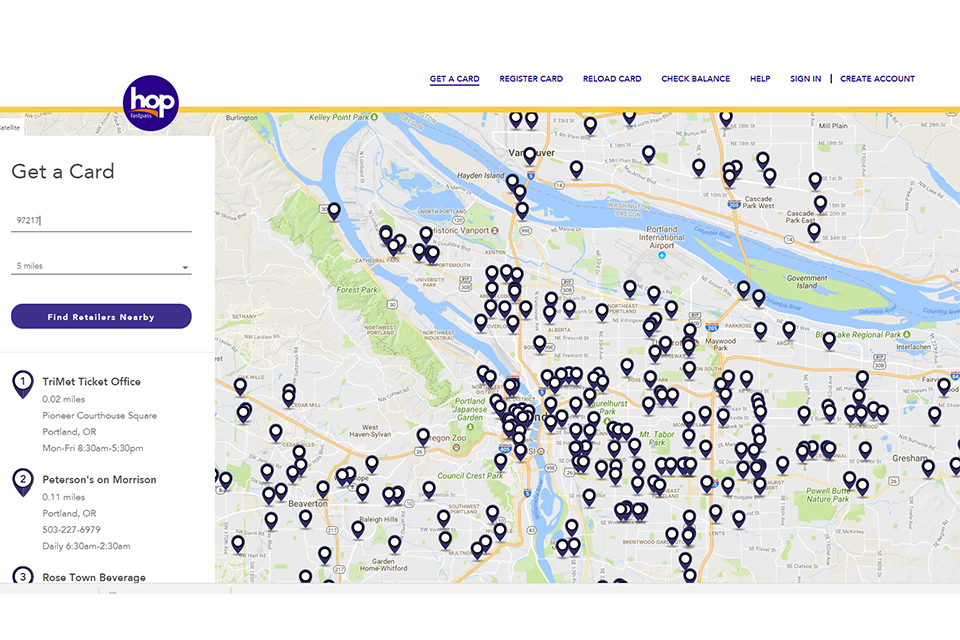 TriMet will end the sale of paper passes in stores and through the website this week – though tickets will still be available at kiosks at MAX stations. Riders paying in cash can continue to do so at MAX ticket kiosks and as they board buses.

It’s part of the transit agency’s slow conversion to Hop FastPass, a system that allows riders to buy and preload (either at stores or through a smart phone app) an electronic card they tap at MAX kiosks or upon boarding a bus.

Eventually, the agency plans to replace the paper tickets sold at kiosks with single-use tickets that can be scanned the same way – enabling access to the system for out-of-town visitors and others who might be unfamiliar with the system.

TriMet is touting the system as a more seamless, flexible program that allows riders to pay as they go. It can also save riders money in some cases. Anyone who taps their card twice in one day will be granted a day pass by the system, where previously riders had to guess in advance whether to use a day pass or a ticket for a single trip.

“Previously, I would go in, I would lay down $100, get my paper tickets and would leave,” said TriMet spokesperson Roberta Altstadt. “The next month [with Hop FastPass], I could lay down $100, and then I could have $97 loaded on that card. It’s kind of the same experience than leaving the paper ticket. What’s different with Hop is you can lay down $20, you can go home and register it, you can set up auto-reload. You don’t need that upfront $100 for a pass.” (The pass itself costs $3, separate from whatever amount the rider loads to the card for fares.)

Hop FastPass launched quietly in 2017. Transit activists have been skeptical about the program since TriMet announced in 2016 that it would be launching an electronic fare program. They worry that TriMet’s shift away from paper tickets and transfers – and possible shift away from cash fares altogether – will disproportionately harm low-income, transit-dependent populations.

Nicole Phillips, a member of Bus Riders Unite and a representative on TriMet’s equity advisory committee, said some transit agencies have electronic fare programs that allow users to manage multiple accounts from one card – so a parent boarding with several children can swipe one card and have the system deduct fares for each passenger in her group. Hop FastPass, on the other hand, requires each passenger over the age of seven to have a separate card and unique account.

“Chicago does have a multiple-account card system,” Phillips said. “You just have to have the operator push a button for everyone in their group. It’s possible that the system [TriMet has] chosen doesn’t accommodate that. They’ve acknowledged that it is an issue and said that they will consider adjustments in the future.”

Another problem? The new passes aren’t quite as easy to find as paper tickets or passes were.

TriMet’s website – which used to sell paper passes and tickets to riders and could deliver them through the mail for a slight surcharge – allows users to register their Hop FastPass cards and add more money to their accounts. (Accounts can also be managed using a smart phone app, or with cash payments at retail locations that support the pass.) But it doesn’t sell or mail the passes.

Instead, riders need to go to a retail location or to TriMet’s ticket office in Pioneer Courthouse Square.

TriMet’s website includes a map of retail locations where it says passes are available. The site ostensibly allows users to search for the nearest location by ZIP code, but it turned up the same list of three locations every time a new ZIP code was entered.

And of the three on the list, only one – the TriMet ticket office – actually sells Hop Fastpass cards. An employee at Rose Town Beverage said the store did not carry the passes. And as of Sunday afternoon, the third store, Peterson’s on Morrison, was plastered with signs announcing its closure. (That was not unexpected: in August Willamette Week reported the store’s owners were fighting plans to renovate the building Peterson’s is in.)

Search functionality aside, the map does display hundreds of pins where passes can, ostensibly, be purchased. There, too, The Skanner ran into problems. Over the last week, a reporter from The Skanner News visited and made phone calls to a dozen randomly selected locations on the map to ask if they had the Hop Fastpass available. Of those, three businesses could not be reached by phone and four said they didn’t carry the passes.

The remaining businesses sampled either answered affirmatively when asked about passes, or had them on visible display at check stands or customer service desks. And they’re a small sampling of the 250 retailers on the map – but until a Tuesday conversation with The Skanner, TriMet was apparently not aware of any issues with search functionality, nor that some entries on the website were not up-to-date.

“I was thinking that that map was updated as retailers were added,” Altstadt said, adding that she would pass on concerns to TriMet’s technical team. She also said the agency is hoping to do more outreach and education, both to its own staff and to retail partners to make sure they understand the new system. Altstadt encourages riders who have difficulty with the new system to reach out to the rider support team at (503) 238-RIDE.

TriMet also hopes to get grocery stores, many of which currently sell passes at customer service desks, to start selling them at the checkout line to make things more seamless for customers.

Phillips said she’s also concerned about how employers who offer discounted passes to employees will adapt to the new system, and how fare enforcement will work if the electronic system goes down.

“There hasn’t really been a lot of information from TriMet to the community in terms of how the transition’s going to go,” Phillips said.