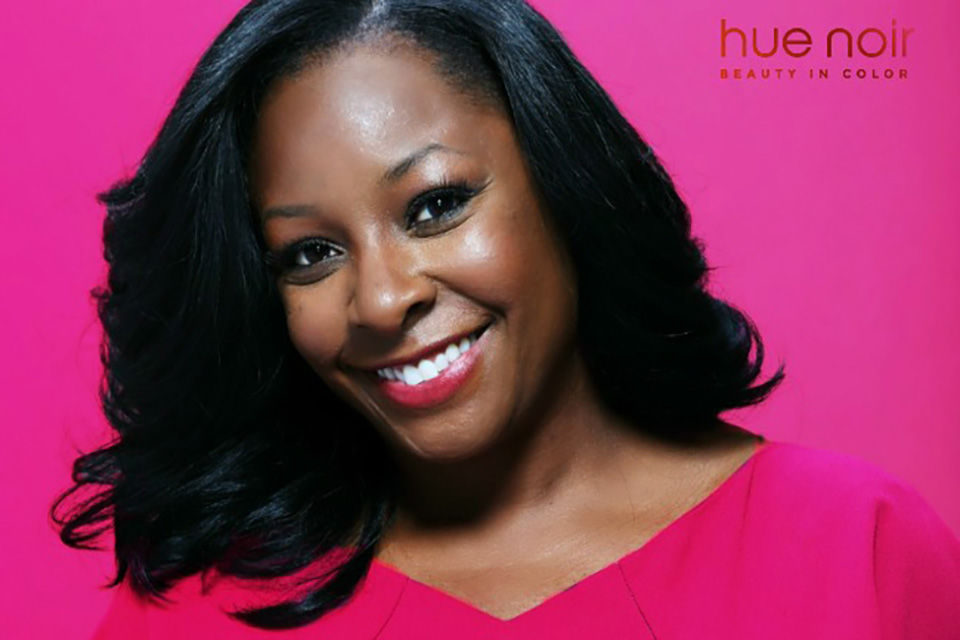 She started experimenting with her mother’s lipstick when she was little, and continued to experiment as she got older. But she also struggled with it.

“I started to have an issue with makeup,” Hayes said. She had a hard time finding shades for darker skin, and when she did find a shade that looked right, often the formula didn’t work for her sensitive skin.

Hayes had always loved science, and majored in biology at Lewis and Clark College in Portland. Initially, the Los Angeles native considered a career in medicine, but decided against it.

Most open positions were on the East Coast, and Hayes decided against uprooting herself, instead returning to Los Angeles to take a job at a food processing company. She told interviewers she was interested in makeup, and they told her the job would teach her the basics of chemistry and formulation.

In 2009 Hayes launched Hue Noir, a line of makeup specifically for women of color, with an emphasis on darker shades. Products are available through the company’s website as well as Costco.com – and lipsticks are sold locally at MadeHerePDX, a shop dedicated to selling work by local designers and manufacturers. (The store has three locations – the Pearl district, downtown and on North Mississippi Avenue. Hue Noir lipsticks are currently available at the Pearl location and Hayes expects they will be available at the Mississippi store in the near future.)

There is no published list of the number of beauty product companies owned by Black women. But smaller cosmetics companies have multiplied in recent years, creating an opportunity for Hayes to serve demographics larger beauty companies have often neglected.

The company, based out of Beaverton, is small: Hayes has two full-time employees and a couple of interns and occasionally uses temporary help.

The majority of raw materials are sourced domestically and the brand is certified American-made – and most products are made at the Beaverton facility, though Hayes anticipates having to work with contract manufacturers for larger-scale projects in the future.

Hayes had considered moving to Portland to launch Hue Noir. Her husband was initially reluctant, but was offered a job as general counsel for Nike, and the rest was history.

“I think Portland played into the strategy that I used for my business,” Hayes said. “I feel like there are a lot of resources and opportunities to network.”

Hayes lives in Beaverton and likes having a short commute after living in Los Angeles, but did say she sometimes feels isolated from Portland’s African American community.

She does get to connect with customers at trade shows – she works five to six trade shows per year. They’ve also been fruitful for putting her in contact with major retailers. But they provide Hayes with her favorite on-the-job moments: seeing customers find a shade of makeup that works for them. Those moments remind Hayes of being a child and experimenting with her mother’s lipstick.

“A lot of our consumers have been people who’ve not been able to find anything good for themselves,” Hayes said.