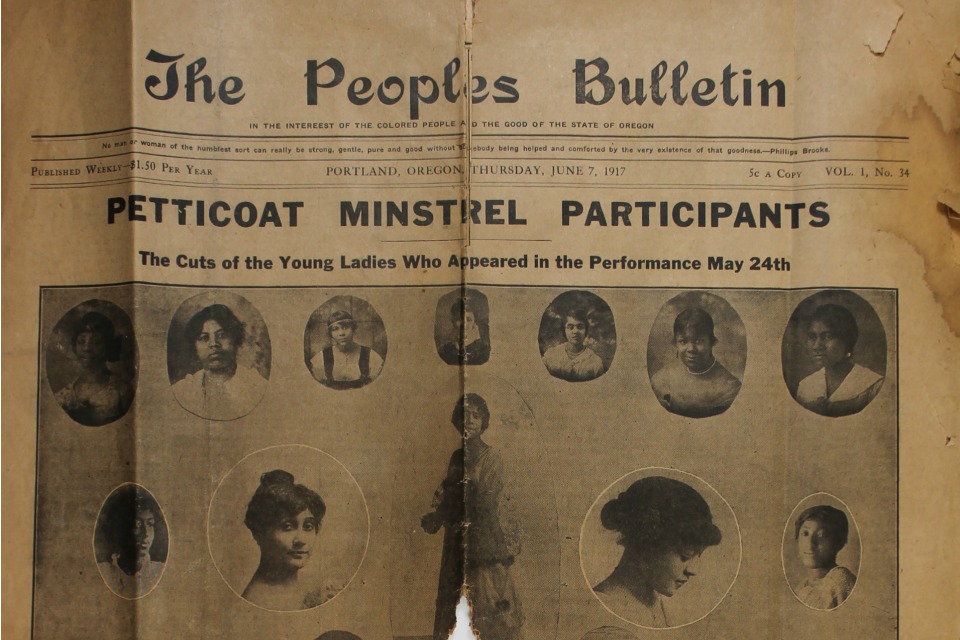 On June 7, 1917, a small community newspaper released its 34th edition. That issue is the only known copy of what was called “The People’s Bulletin.”

Beneath the masthead its mission reads clear: “In the interest of the colored people and the good of the state of Oregon.”

At the time of its publication, it was still illegal for Black people to even move to Oregon. That law would hold until 1926.

Dr. Kimberly Jensen – history and gender studies professor at Western Oregon University – discovered the newspaper while researching for an upcoming article for the Oregon Historical Quarterly about citizenship and civil liberties of Oregon women during the First World War.

Yet tracing the paper’s back story – and the whereabouts of additional issues – has been challenging for Jensen, to say the least.

“The People’s Bulletin” is not referenced at the research library of the Oregon Historical Society; nor is it among the Rutherford Family Collection at PSU Library’s Special Collections, which includes a number of newspapers such as Beatrice Morrow Cannady’s “The Advocate,” that pertain to Portland’s historic Black community. Special Collections, in fact, received a grant last year to preserve Oregon’s historic African American newspapers

“In general, a lot of that ephemeral history in Portland just sadly disappeared,” said Cris Paschild, PSU archivist and head of Special Collections. “It wasn’t actively collected by repositories and it wasn’t recognized as historically significant for a long time, so in a lot of ways it was really dependent on individuals to maintain materials.”

What Jensen does know is that “The People’s Bulletin” was published by the Portland branch of the Oregon Colored Women's Council – formed in 1912 – with Ruth Flowers listed as the paper’s associate editor. Her husband Ralph Flowers was one of Portland’s first African American civil service employees, according to Jensen.

The Oregon Colored Women's Council would later grow into the Oregon Federation of Colored Women’s Clubs, a conglomerate of as many as 17 different civic and political groups established in Oregon at the turn the twentieth century.

According to records, “The People’s Bulletin” became the official mouthpiece of the federation, whose members included Hattie Redmond, head of the Colored Women's Equal Suffrage League, and Katherine Gray, who become its first president.

The bulletin was also adopted by the Colored Women’s Republican Club, founded by Lizzy Weeks, which served as a voter education group for African American women in Portland.

“We have this really interesting glimpse of how women are seeing this four-page newspaper as a way to connect with members of the community, but also to put out information about what their organizations are doing,” Jensen told The Skanner. “During World War I, that’s really important because there’s a particular focus on supporting the war effort.”

While women’s social clubs and civic organizations were considered pillars of community building in early Black Portland, little has been uncovered about the council’s publishing activities.

As the bulletin contains standard items from the wire – along with smaller local stories that reflect the world of journalism – Jensen said its level of competence is impressive. “This is not an amateur job, it’s very much in line with professional newspapers of the time,” she said.

“The women that are part of this group are… moving forward to build the Black community,” continued Jensen. “They understand that racism is going to limit what they’re able to do – in terms of claiming citizenship – even through participation in these activities.”

In 2015, Jensen visited the Davidson Library at the University of California Santa Barbara, where the fragile 34th edition of “The People’s Bulletin” has been preserved in the Special Research Collections, included in a larger archive titled “Portland [Oregon] African-American Collection, circa 1900 - 1970.”

“We purchased this collection from one of our vendors in 2011 as part of our ongoing efforts to broaden the scope of our collections of African American resources,” said Edward Fields, assistant head of the Special Research Collections.

According to Fields, the archive contains various sized black and white photographs of unidentified individuals, churches, and schools; along with brochures, flyers, and other assorted ephemera.

In addition to the “The Peoples Bulletin,” the collection holds a 1943 clipping from “The Black Worker,” which has been identified as the “Official Organ of the Brotherhood of Sleeping Car Porters.” Although it was published in New York, the paper was mailed to one “B. Johns” in Portland.

While few references to it exist, “The People’s Bulletin” is mentioned in records from the Oregon Federation of Colored Women’s Clubs in January 1917 and by The Oregonian in October in 1917 – dates that serve as bookends for Jensen’s research. Notably, it’s also listed in the Portland City Directory for 1917, among other newspapers of the time.

Jensen is hoping that increased public knowledge of “The People’s Bulletin” will bring about more copies from Portland basements and attics.

“Every word that’s in that one issue is precious,” said Jensen. “So if people have a sense that they might have seen something like this, we can locate more issues. My hope is that if we find some additional newspapers, we’ll discover even more about what (these women) were doing.”

If readers have any information pertaining to “The People’s Bulletin,” please contact Kimberly Jensen at jenseki@wou.edu.