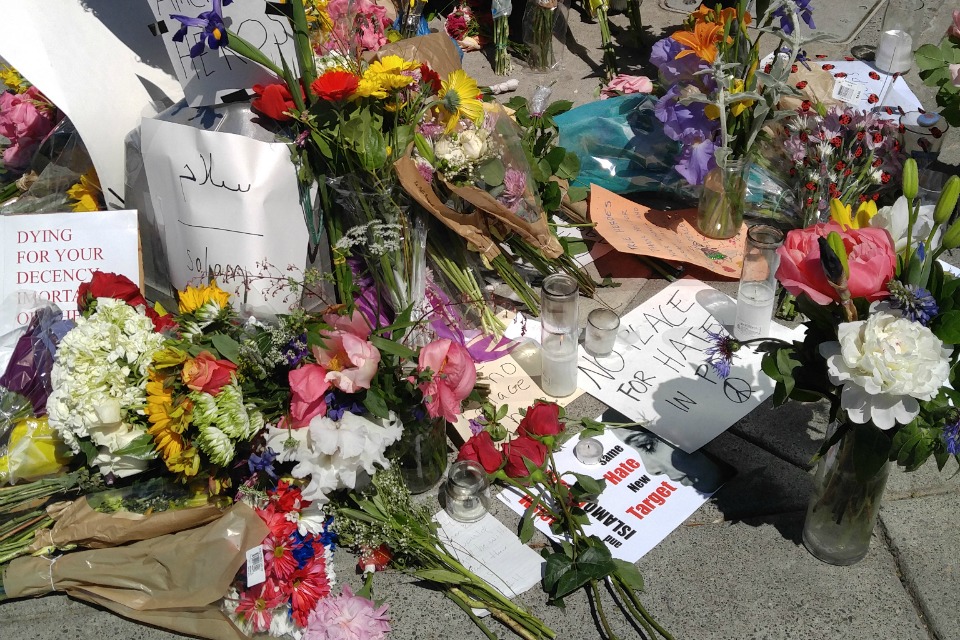 By Christen McCurdy | The Skanner News
Published: 31 May 2017

Portland made national and international headlines Friday afternoon after two men were killed and a third injured trying to protect two Black teenage girls – one wearing a hijab – on a MAX train as it pulled in to Hollywood Transit Center.

According to witness accounts and court records, Ricky John Best, 53, Taliesin Myrddin Namkai-Meche, 23, and Micah David-Cole Fletcher, 21, intervened after seeing a fellow passenger – 35-year-old Jeremiah Joseph Christian – target two teenage girls on the train, shouting Islamophobic and xenophobic remarks and violent threats. All three men were stabbed; Best died at the scene, and Namkai-Meche passed away shortly after the incident at a local hospital. Fletcher was treated for his injuries and released from a hospital Tuesday.

Christian was apprehended at the scene, and according to the affidavit released by the Multnomah County Circuit Court Tuesday, he confessed to the crimes in the back of the police car: “I just stabbed a bunch of (expletive) in their neck” and “I can die in prison a happy man.

At his Tuesday-afternoon arraignment in Multnomah County Circuit Court, Christian shouted, “You call it terrorism. I call it patriotism. You hear me? Die.”

“Christian will most likely die in prison since our state has not executed anyone against their will since Kennedy was president,” wrote executive director Bobbin Singh. “Christian will be given the opportunity repeatedly over many years to draw the spotlight of media attention when his case returns to court for his multiple appeals, reopening the wound for victims’ families.”

Witnesses say the incident took place just as a Green Line train bound for Clackamas Town Center pulled into the Hollywood Transit Center, and that immediately afterward, Christian de-boarded the train and fled into the Hollywood neighborhood. A passenger’s video of Christian’s arrest shows him shouting at police and drinking out of a container before being apprehended.

Friday’s slayings made national headlines along with a string of gruesome crimes targeting minorities -- including the stabbing death of Richard Collins III, an African American student visiting the University of Maryland, allegedly by a White student who participated in White nationalist forums online, and  the killing of one Native American man and the injury of another in Washington state after they were, apparently, purposely run over by a White man driving a monster truck and taunting them on a campground over Memorial Day weekend.

In December, the Southern Poverty Law Center reported more than 1,000 hate incidents took place nationwide in the first weeks after Donald Trump was elected to the Presidency. The report, which tracks the number of incidents between Nov. 9 and Dec. 12 of that year, notes Oregon had the highest per capita reporting with 42 incidents – half of which were reported in Portland.

A spokesperson for the SPLC told The Skanner the organization only began tracking hate incidents starting after the election. The Portland Police Bureau’s interactive crime map allows users to look at crime broken down by neighborhood and type of incident (such as theft, vandalism or assault) but the map does not include a category for bias crime – which can encompass several incident types. The bureau was not able to provide information about how it tracks bias crimes, or whether it has seen an uptick in incidents in its jurisdiction, in time for The Skanner's deadline.

“The killing of two good samaritans in Portland, Oregon, by a deranged extremist is a shocking tragedy,” said Heidi Beirich, the director of the Southern Poverty Law Center’s Intelligence Project in a written statement. “What’s not so shocking, however, is the patchwork of hateful ideologies that the killer appears to have embraced and acted upon. Anti-Muslim hate crimes increased faster than every other category in 2015, according to the FBI. Meanwhile, anti-Muslim hate groups are organizing in greater numbers than ever before. Elected officials and community leaders must continue to take a stand against this kind of organized hate.”

Shortly after Christian’s name and mughsot were released Saturday morning, local reporters who had covered pro-Trump “free speech” rallies in the Portland area earlier this year identified him as a visible and vocal participant at such events, including one April 29 where he was seen on video shouting slurs, throwing Nazi salutes and carrying a baseball bat. He was also recorded on video the night before the murders on another MAX train ranting about Christians, Jews and Muslims and threatening to stab the driver, apparently right after throwing a bottle of Gatorade on a Black woman who then sprayed him with Mace.

Joey Gibson, the Vancouver, Wash.-based organizer of the April 29 rally and a similar upcoming event June 4, has disavowed Christian and denied any relationship or influence.

But recent alt-right events have involved physical altercations between right- and left-wing demonstrators, and they have another – scheduled for 12:30 p.m. June 4 in Terry Schrunk Plaza downtown. At least two different Facebook event pages have been created by different groups announcing counter-demonstrations nearby.

Mayor Ted Wheeler has called on the federal government – which owns Terry Schrunk Plaza and has, according to Wheeler and Gibson, been granted a permit for the alt-right rally – to revoke its permit, a move for which he was immediately and sharply criticized by the ACLU of Oregon. On Wednesday the General Services Administration said it would not pull the permit for the event.

But another upcoming alt-right event – a June 10 "March Against Sharia" – was cancelled early Wednesday morning, with organizers saying they intend to hold another version of the event in Seattle soon.

In addition to counter-demonstrating, activists and leaders are urging affected community members to care for themselves. Local leaders including Sen. Lew Frederick (D-Northeast Portland) used social media over the weekend to encourage those affected by the killings to call Multnomah County’s Crisis Line if they need help. (The line is staffed by professional counselors who can be reached 24-7 at (503) 988-4888.)

The activist group Portland’s Resistance has also announced a June 10 event called “Self Care for Resistance.” A group that includes a licensed massage therapist, a professional counselor and an energy healer will provide “development of self-care and boundaries for activists and concerned citizens struggling to find peace in our troubled times” in exchange for a donation.

Kat Stevens, an organizer with Portland’s Resistance, told The Skanner activists involved with the group started talking about self-care events in January and postponed the event to follow the June 4 demonstration, since organizers expect a large turnout.

“We’re doing a lot of demonstrations that are hard on our bodies and our minds,” Stevens told The Skanner. “It’s not so safe out there and we need to be healthy if we’re going to be in this for the long haul.”