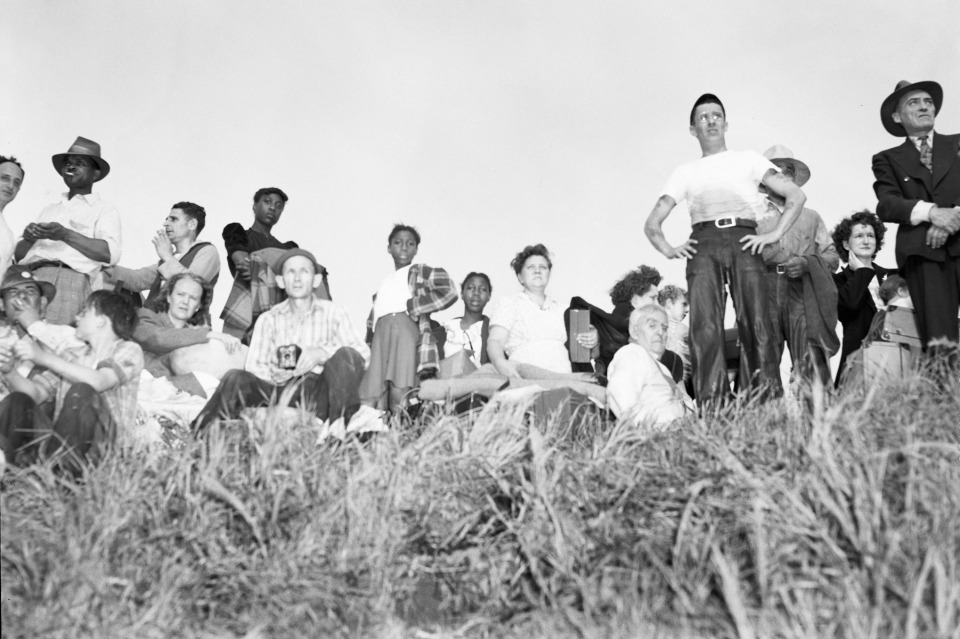 In 1948, America’s greatest folk musician, Woody Guthrie – known for “This Land Is Your Land” and numerous other songs about American life and the plight of working people -- penned a piercing ballad about Oregon’s worst disaster, Vanport.

“Vanport’s Flood,” he called it.

The song is the only known Guthrie song about the Pacific Northwest outside of the “Roll On” Columbia River songs he wrote for the Bonneville Power Administration (BPA), Guthrie experts say. It also may be one of his last important creative efforts before Huntington’s Disease took its toll on his ability to write and play music.

The song was lost to history after its publication in a long out-of-print 1963 songbook, even as Vanport and Guthrie have remained noteworthy.

Portland Mayor Charlie Hales declared May 30, 2016 a “Vanport Day of Remembrance,” and there will be a second in 2017. There’s been an article in the Smithsonian Magazine, The Skanner documentary series called the “Wake of Vanport” and events by Vanport Mosaic. Zita Podany authored a book of photos, and Portland Community College professor James Harrison is working on a history. 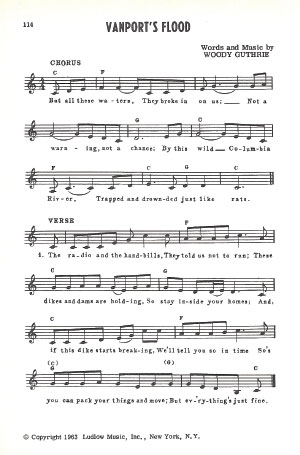 The sheet music was published in “The Nearly Complete Collection of Woody Guthrie Folk Songs,” by Ludlow Music, copyrighted 1963. The Woody Guthrie Center shared sheet music after a reporter investigated a throwaway reference in a 1969 Oregonian story.

“I had never known that this had ever been published in any form,” Seattle musician and former BMI Foundation / Guthrie archives fellow Joe Seamons said. Seamons shared a copy of Guthrie’s original typewritten lyrics, but didn’t know of the published sheet music.

Sitting in a Northeast Portland cafe and staring at the sheet music, Vanport survivor and community liaison for diversity initiatives at Portland State University Ed Washington smiled, then shook his head.

“He really captured it,” Washington said, chuckling. “I’m like ‘geez, that’s right. ‘The radio and handbills, they told us not to run.’”

“I mean, really, the opening lines, ‘But all these waters, they broke in on us.’

‘Drownded just like rats.’ He’s kicking booty there, without really just coming out kicking. That’s Woody, it really is. I think it’s amazing. I had never seen this.”

“They said, ‘Don’t worry, there won’t be danger until Tuesday. These dikes and dams are holding,’ and that’s exactly what they said.’”

The song’s lyrics tell the story of the May 30, 1948 flood in classic Woody Guthrie fashion, describing a complicated moment historians are still working to unravel. The flood destroyed what was then the second-largest city in Oregon — the largest housing project in the nation — in minutes.

But all these waters, they broke in on us,
Not a warning, not a chance,
By this wild Columbia River,
Trapped and drownded just like rats.

And if this dike starts breaking,
We’ll tell you so in time,
So’s you can pack your things and move,
But everything’s just fine.

“It’s pretty graphic, there’s no question about it,” said Bill Murlin, the BPA archivist who discovered the “Roll On, Columbia” recordings and other material from the period in 1941 when Guthrie was living and working in the Pacific Northwest. “As far as why it’s not been cited in any of the Vanport history, I find that something of a mystery myself.”

Despite reassurances in a “DON’T GET EXCITED” handbill slipped under doors by the Housing Authority of Portland that morning, a railroad dike owned by Union Pacific caved in around 4 p.m. Vanport residents scrambled to save children and precious possessions and escape churning, fast-moving waters.

“It was horrible, because of the congestion. You only had one way out,” recalled survivor Oregon Sen. Jackie Winters. “Then you had the additional congestion of sightseers, because they had heard what had happened.”

“There was one woman, I believe she dropped an infant,” Sen. Winters said, her voice dropping to a whisper. “Those images stay.”

Many Oregonians risked their lives to save Vanporters from the churning waters, or opened their homes to survivors – but some, The Oregonian reported the next day, showed up to stare and eat popcorn.

“It was basically a spectator sport, if you will,” said PCC’s Harrison. He noted that the song’s lyrics contained symbolic details. “When you mention rats, one of the things that the ex-Vanporters reported, there was a rat problem there. There were thousands of rats that were seen scurrying out during the flood,” Harrison said.

“I think [Guthrie’s song] captures the essence of what many people felt,” Harrison said. “Historical accuracy, that’s another question mark, and a question mark that I am working on.”

According to Guthrie’s daughter Nora, he was living in Brooklyn at the time the flood took place. In an email exchange with The Skanner’s reporter, she suggested he read about the flood in the news.

Guthrie never recorded the song. At the time of its publication in 1963, he was suffering from Huntington’s Disease, an inherited neurological disorder that gradually robbed him of his ability to play, write or sing music. He died in 1967.

Guthrie’s lyrics are notable for the way they describe possible racial discrepancies in the way the flood was handled – and for its racially inclusive, working-class spirit.

The song’s final verse calls for “hands of every born color” to “build a hundred Vanports back / All safe and clean and free, / ‘Cause if we let her flood again / It’ll take both you and me.”

But an earlier verse describes the “radios and handbills” that assured Vanport residents they’d receive plenty of warning in the event of a flood: “And if this dike starts breaking / we’ll tell you so in time / So’s you can pack your things and move / But everything’s just fine.”

The Housing Authority of Portland, which managed Vanport after Kaiser built it, segregated Vanport by race.

Vanport Mosaic’s Laura Lo Forti notes that the handbill mentioned in Guthrie’s lyrics, shoved under the doors of Vanport residents, may have been distributed primarily to White residents.

“You hear people from the Black community saying, ‘We didn’t see this piece of paper, we didn’t receive anything,’ Lo Forti recalled. “Then you have this White lady who has this piece of paper. We will never figure it out. ... Wow, that’s incredible, [Guthrie’s song] is basically talking about that piece of paper.”

‘Could things have been handled better?’

All that remains of the 668-acre city is chunks of concrete foundation from the Vanport Theater, if one knows where to look, and an “Oregon History” sign near a MAX station.

“For something that was that dynamic, why wasn’t there more recognition?” asked Lee Moore, a Vanport survivor and former Chair of the Board of the Housing Authority of Portland, at “The Wake of Vanport” screening in November. “Why has it essentially been kept a secret?”

“I think there’s always been that question – ‘Did they know more than we did?’” Sen. Winters said. “There’s always this, ‘Could things have been handled better?’”

She paused, then reread Guthrie’s lyrics. “Trapped and drowned, just like rats. Oh, my.”

The official death tally was 15 – but some who’ve studied the history believe it could be higher.

Harrison seems to favor a number higher than official tallies but smaller than hundreds.

“The sheriff at the time of the flood in June of ‘48, made an estimate that there were probably fewer than 50 [deaths],” Harrison said.

The work ethic and rebuilding spirit in Guthrie’s lyrics is, perhaps, an appropriate elegy for a hastily-built wartime community experts said proved to be ahead of its time.

Historians and residents have noted the community’s progressive features like a free, 24-hour, seven-day child care center, shaped like an octagon.

While Vanport residences were segregated by block, community facilities like schools and businesses were integrated – in contrast to Portland at the time.

If Vanport was the birth of a more diverse Portland, its flood was the moment when it all changed. It’s fitting, perhaps, that Guthrie, who wrote so many songs about working people and the Columbia, would pay tribute to both in “Vanport’s Flood.”

In the original typewritten lyrics, Guthrie dedicates the song to survivors: “All of you folks that lost every stitch of everything you ever had in that big flood.”