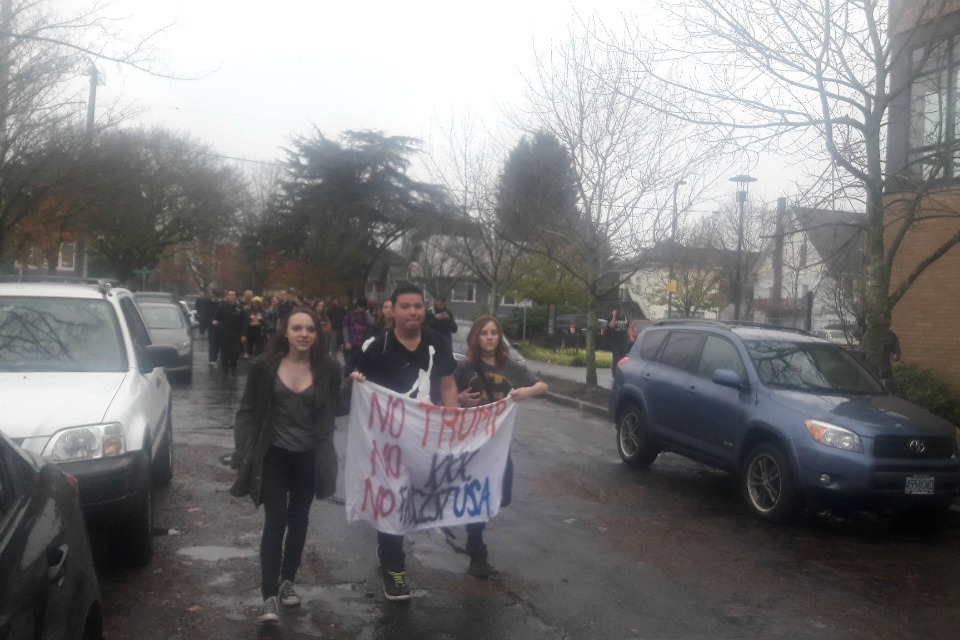 National leaders on both sides of the aisle and some national media outlets were cautiously optimistic in the first days after Republican candidate Donald Trump was elected to the U.S. Presidency last week.

But local leaders have taken a different tack. Congressman Earl Blumenauer and Senators Ron Wyden and Jeff Merkley have all condemned Trump’s appointment of Steve Bannon – known for running the White nationalist website Breitbart News – as his chief of staff.

Mayor-elect Ted Wheeler has said he plans to preserve Portland’s status as a sanctuary city, even if that means, as Trump has threatened, the city loses federal dollars.

And activists and community organizations that serve communities of color mobilized immediately against the President-elect. Thousands of people have marched in the days since the demonstration. Protests have, on the whole, been peaceful, though one protester was shot and a minority of people joining protests caused an estimated $1 million in property damage.

The Skanner spoke with organizers from several local community groups that advocate for communities of color about how they plan to move forward in the wake of Trump’s election to the highest office in the land.

“Movement building continues,” said Oscar Guerra-Vera, an organizer for Unite Oregon, which launched in July 2016 as the merger of Oregon Action and the Center for Intercultural Organizing. The organization advocates for immigrants, refugees and other communities of color throughout the state. “It wasn’t going to stop if Hillary was elected and it won’t stop now.”

Guerra-Vera said the organization intends to continue to focus on extant campaigns – police accountability, data collection and calling on local government to divest in banks that invest in the prison-industrial complex – while also being a resource to members who are concerned about the election results and an apparent rise in reports of racist, misogynistic and Islamophobic hate crimes across the country.

“We really have been hearing a lot of our members being harassed for being Muslim, as well as people from the Latino community,” Guerra-Vera said.

On Nov. 22, Unite Oregon will host an event called The Movement Continues at its North Portland location (700 N. Killingsworth) to allow members to talk about what they have been going through in the last few weeks. The organization, along with coalition partners, will also host a candlelight vigil Dec. 11 to “stand in solidarity and show Portland and Oregon the true Oregon that we want to be a part of which is a true united community that we want to be a part of,” Guerra-Vera said.

“I think in this moment in time, the conversations have been happening, the movement building since we started Unite Oregon, is really something the world needs,” Guerra-Vera told The Skanner.

Executive director Lee Po Cha of the Immigrant and Refugee Community Organization, said in an emailed statement that the organization will continue to do everything it can to serve its communities.

“For 40 years, IRCO has been building new beginnings for immigrant and refugee families. As we move forward after the election, IRCO’s vision remains the same. We will continue welcoming newcomers and helping them achieve safety, equality, justice and self-sufficiency. Our mission is now more important than ever,” Cha wrote.

“We hope that our President-elect will continue to uphold the core values we share, like equal protection and respect for every member of society. IRCO is working with other local and national partners who are strong advocates of refugees and immigrants on the potential short and long-term impacts of the election results. We are taking steps to ensure that essential supports and services to immigrants and refugees are maintained, both nationally and in the state of Oregon.”

Jo Ann Hardesty, a veteran activist who currently serves as president of the NAACP’s Portland branch, said local election results – particularly the election of local bookstore owner Chloe Eudaly to the Portland City Council – made her feel much more optimistic than the national results, which she thinks point to a need for major reform or dissolution of both major political parties.

“There are a lot of moving parts at the moment but I think the good news is that we’ve been here before,” Hardesty told The Skanner News. “I think it’s going to take organizing, it’s going to take multigenerational, multiracial organizing to do what we have control over -- which is Portland, Oregon. So we’re at the beginning of some serious organizing.”

Hardesty attributed national results to voter suppression efforts, a decrease in the number of Department of Justice attorneys monitoring activity at polls and a rising tide of racism in the country.

“The day the Bundys got acquitted, I knew that Trump could be President,” Hardesty said. “That said to me the law no longer applied, if you’re a White male and armed. That’s a scary world to live in.”

She said many of her friends are afraid: immigrant friends, with papers and without, worry they’ll be deported – mass deportations being a campaign promise that, unlike others he walked back shortly after the election, Trump has said he has every intention of keeping. And many racial minorities, regardless of their immigrant status, are scared of racist harassment.

But Hardesty also sees many people looking for ways to help or resist.

“I believe there’s many more people who believe that love trumps hate and are willing to get engaged in one of the many efforts that are taking place,” Hardesty said. “And if they don’t see something they like, they can start their own.”