‘Sista in the Brotherhood’ Wins Acclaim 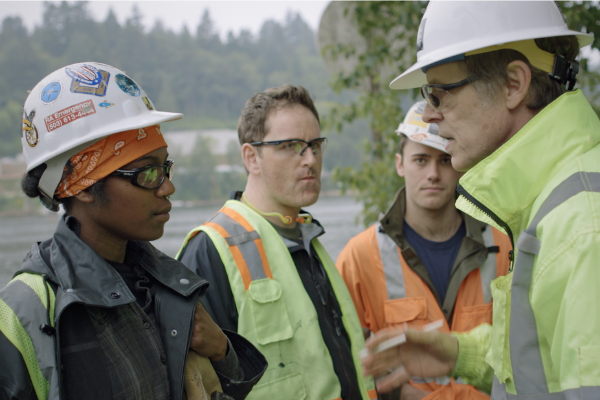 Nearly a year ago, the creators of the “Sista in the Brotherhood” were wrapping up production and preparing to premiere the film to a sold-out crowd at the Clinton Street Theatre.

Over the course of the last year, the film has gained acclaim and has received numerous awards at film festivals. The Skanner News spoke with director Dawn Jones Redstone and producer Roberta Hunte Ph.D, about the reception of the film and where they are going from here.

Redstone was also awarded the 2016 Lilla Jewel Artist award from the MRG Foundation and Woman of Vision award from the Oregon Daily Journal of Commerce.

The short fictional film focuses on a day in the life of Laneice, a young, Black apprentice carpenter who is starting on a new construction job. Throughout the day, she endures harassment for being both Black and a woman in a typically White, male profession.

The jokes and slurs that she receives are based in part from Hunte’s doctoral research “My Walk Has Never Been Average.” She interviewed 15 Black women about their experiences in the construction trades. The women spoke of racist and sexist treatment by their coworkers and managers.

In the film, Laneice is referred to as a “Quota” -- a person who has been hired to fulfill government diversity regulations.

Hunte and Redstone spoke about showing the film to groups of tradeswomen at national conferences. At an event in New York City, Redstone said the film resonated with those who had lived Laneice’s experiences.

“After watching it, someone raised her hand and said that she had had all of those things happen, all the various microaggressions that the lead character experiences -- but not necessarily all in one day,” Redstone said.

One of Hunte’s favorite screenings was the Women Build Nations conference in Chicago where the film was shown to more than 700 women in the trades.

Both Redstone and Hunte felt a heavy duty to tell the stories of Black tradeswomen and to portray them accurately to a larger audience. Redstone remembers the exact number of Kickstarter backers who funded the film’s creation -- 256 people.

“All these people were invested in the project and it was a lot of pressure,” Redstone said. “I had this responsibility and privilege to tell this story, but it was a little nerve-wracking at times too.”

Hunte said she inspired by the women she interviewed for her dissertation.

“The women that I interviewed said ‘please do something with this; please don’t just let it sit there. Please share’,” she said. “I feel very honored and excited that we are getting to share.”

In addition to film festival screenings, Sista in the Brotherhood has been getting exposure through training screenings. The film has been shown to regional government Metro, at a Plumbers Union in New York, Oregon Tradeswomen and the NECA/IBEW Electrical Training Center.

Hunte is currently creating a curriculum and discussion questions so the film can be distributed as an education tool. Those who are interested in screening the film for training or education purposes are encouraged to contact them at www.sistainthebrotherhood.com.

Redstone now is working on a full-length dramatic feature film that will have a tradeswoman as the main character. Hunte has been focusing on theatre, working on the play “My Walk has Never Been Average,” and a piece focusing on reproductive justice, “We are Brave.”

When The Skanner News first spoke with Redstone and Hunte, they were asked what they hoped to see out of the project. They both said that they wanted to tell a good story. Hunte is now convinced that people have a hunger for stories that show the lives of those who are usually ignored or overlooked.

“I think people want different stories, they are interested,” Hunte said. “They want to see a story that tells them about a slice of life that they didn’t know.”