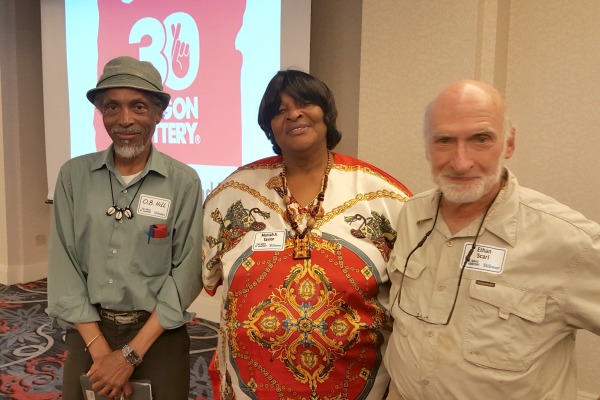 Over 68 years ago a flood destroyed the most racially diverse city in Oregon, Vanport -- but the stories live on through the oral histories of the survivors

Last Friday, The Skanner News hosted a showing of “The Wake of Vanport,” at the downtown Embassy Suites hotel ballroom. The media piece showed short films capturing the experiences of those who lived in Vanport before the flood.

Lee Moore, who was a child when he lived in Vanport before the flood, spoke to the audience before the showing of the film. Moore described a city of utility -- a quickly constructed public housing project built to house Kaiser Shipyards workers during the Second World War.

Moore’s mother worked in the shipyards, his grandfather was a barber and his aunt worked as a seamstress -- all parts of a thriving wartime community.

The work brought people from all over the country searching for opportunity. Vanport offered furnished houses, schools, recreation centers and a movie theater. More than 40 percent of the population of Vanport was African American.

Moore described a town that was both integrated and segregated: people of different races worked together but did not live together. There was much more racial cohesion for the children of Vanport -- Black, White, Native American children who went to school with each other.

After the flood hit Vanport on Memorial Day, May 30, 1948, many of these families were left with few possessions beyond the clothes on their backs.

“The only thing my parents were able to salvage from the flood was a photo album... and everything else was lost,” Moore said.

Many of the stories told in the “Wake of Vanport” series described life before and after the flood. The hastily-constructed town forced a grudging acceptance of racial integration. But after the war effort was over and Black families needed to relocate into Portland, the acceptance was over.

In the Vanport film community historian O.B. Hill spoke about moving frequently through segregated housing projects in North Portland. In Moore’s Vanport history, he described having crosses burned on his front lawn.

In the short film “Scattered,” survivor Gloria Lavender faced harassment at school as Black children from Vanport began to attend Portland schools. Her teacher asked her how to pick cotton, a question that hurt Lavender and enraged her mother, who then confronted the teacher.

“Just because I had come from the South did not mean that I knew how to pick cotton,” Lavender said.

In addition to the showing of the “Wake of Vanport,” the event hosted local author Zita Podany who wrote the book “Images of America: Vanport.” The first 40 guests to register for the event online received a free copy of the book.

Podany told The Skanner News that she was intrigued by the history of Vanport as a child. At first she could not believe that there was a city in the Delta Park area and thought adults were joking with her.

As a teenager, she researched Vanport at the library and discovered that the history was true. Over the years Podany collected more and more stories and felt compelled to write a narrative of Vanport that celebrated the lives of those who made a home there.

In addition to Moore, Vanport survivors O.B. Hill, Ethan Scarl and Mariah Taylor also attended the showing and offered to share their personal experiences with the audience.

Podany told The Skanner News that The Wake of Vanport and the Vanport Mosaic Project, a collective of storytellers and artists dedicated to remembering Vanport, have invigorated research and deepened the understanding of the history.

When she began her investigation, very few people were willing to talk about living in Vanport. She had information from archives and images, but she wanted to know the lived experience of the city -- the sights, the smells, the day in and day out life of Vanport.

“All of these oral histories that are being collected are very fascinating, because that is the missing piece in our historical record,” Podany said.