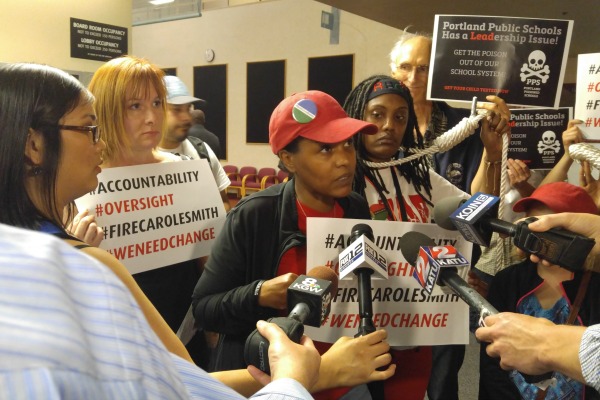 Shortly before the Portland Public School board met Tuesday night, PPS Superintendent Carole Smith sent a letter to parents and staff announcing her retirement at the end of the 2017 school year.

She outlined what she called the successes of her last nine years at PPS. She also stated that the PPS board had asked her to stay to give them time to conduct a search for a new superintendent.

But according to PPS School board member Paul Anthony, there was no discussion from the school board about Smith’s retirement prior to her sending the announcement, which was immediately picked up by local media. KATU news reported that board chair Koehler had asked Smith to stay on through the end of the next school year.

“It is not true that the school board asked Carole Smith to stay,” Anthony told The Skanner News. “To the best of my knowledge the school board has not been consulted on it at all, except that I got a brief text message from Tom Koehler, the board chair, five minutes before OPB made the announcement.”

“The board has asked me to stay through the end of my contract in June, 2017 to allow them to move forward to conduct a superintendent search at the appropriate time and set the district up for a successful and smooth transition of leadership, as well as continue our work on health and safety,” Smith wrote.

Local activists held a demonstration – announced weeks in advance of the board’s meeting – and called for Smith to be fired.

A crowd of nearly 75 parents, students and advocates marched and testified about high lead levels in water at the schools and alleged civil rights violations against Black students.

Don’t Shoot Portland organizer Teressa Raiford testified about the short life of her nephew, Andre Dupree Payton, who was shot and killed on the corner of NW 2nd and Couch at 2 a.m., September 26, 2010.

She said Payton went to schools that talked about equity and culturally competent education, but his death showed the failure of that system. Raiford asked for oversight and accountability for equity funding.

Her call for Smith to be fired was repeated by the shouts of the protestors in the gallery. She also called out the school board, saying they were complicit and unwilling to challenge the administration.

"If you guys don't remove Carole before next year, it means that you don't have the backbone to be the board next year," Raiford said.

The demonstration at the meeting represented a wide swath of parents and advocates. Their concerns expanded beyond the single issues of radon, leaded water, racism, or civil rights. The crowd called out for accountability, transparency and oversight.

Kim Sordyl, parent and PPS critic, said the discovery of lead in the water – and the district’s handling of the issue -- affected every student, teacher and staff member and has brought the community together to demand change from an administration resistant to admitting fault.

“There is no leadership at PPS. It is all about coverups and public relations and promoting the careers of administrators in PPS,” Sordyl told The Skanner News. “PPS had absolutely no right to decide for parents and staff members whether their children would drink leaded water. And that’s exactly what they did -- they decided for us.”