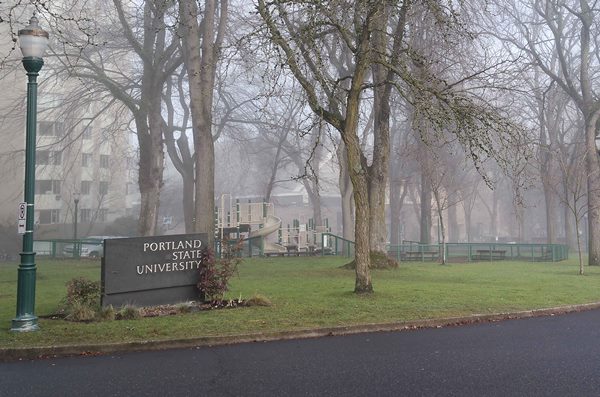 A Tuesday night discussion featuring two nationally prominent activists remained somewhat abstract until moments before the scheduled question and answer session -- when a student activist was invited to the stage to call for the disarmament of Portland State University’s security.

They were introduced by Carmen Suarez, Vice President of Global Diversity and Inclusion at PSU, and the conversation was moderated by African American Student Service Coordinator Marlon Marion.

Shortly before the panel discussion started, a group of students seated in the bleachers near the stage, chanted “Disarm PSU!” a few times, and Garza mentioned being aware of a “big fight” over the recent decision to arm campus police during her discussion with Tometi and Marion.

“The work is local,” Tometi said. Then she and Garza said they would like to bring someone to the stage.

“You will notice my name is not in the program,” said Alyssa Pagan, an activist with the Disarm PSU movement, after walking up to the stage.

After explaining that activists with the PSU Student Union had been fighting against the Board of Trustees’ recommendation that campus security start carrying arms, an audience member cheered. Pagan reacted by saying she and other students had received multiple letters from the university about their activism, including letters of expulsion.

“I don’t need your congratulations. I need your help,” Pagan said.

Pagan also made mention of the introductory speech, which focused on different kinds of privilege, including White privilege, light-skinned privilege and the fact that the event took place on lands that had belonged to indigenous people. She said while she appreciated Suarez’s intentions, she was offended by the implication that the problem is a lack of diversity at PSU, or that people don’t check their privilege.

Much bigger than the problem of “individuals with bad attitudes not checking their privilege,” she said, are the systemic issues that affect students of color. In addition to armed security, Pagan noted the failure of the university to pay a living wage to on-campus workers. A video of Pagan’s speech is viewable on her Facebook page.

Students associated with PSUSU handed out flyers at the door as the event let out, advertising a Wednesday afternoon demonstration calling for the disarmament of campus security, broken ties with Armark, a $15-per-hour wage for all campus workers and that tuition be lowered by reducing administrative salaries.

The preceding discussion focused on broad issues of movement-building, developing a better understanding of Black history and how social change movements are contextualized in media.

Garza and Tometi, along with Patrisse Cullors (who was not able to attend the event), said they are often credited for starting a movement, but they didn’t.

“When we talk about how movements, we focus on one or two people who catalyze it, and that’s a bad habit,” Garza said.

Garza, Tometi and Cullors didn’t coin the slogan with the intention of creating a movement and feel they created a vehicle for organizing a movement that was already forming.

“It has never been a plea to non-Black people to make our lives matter,” Garza said of the slogan. “It was always a demand.”

Of the “All lives matter” response, Garza said, “Of course we believe all lives matter, but we live in a world where that’s not the case.”

Garza and Tometi demurred during the question and answer session, when an audience member asked them which presidential candidate they thought best embodied King’s legacy, with Tometi saying she felt a two-party system was inadequate for a robust democracy. Garza said it’s too early in the election season to be giving away votes, adding the movement needs to keep pushing the current candidates.

Tometi said there are a variety of ways people can get involved that aren’t just limited to joining a local chapter of the Black Lives Matter organization, which now has chapters in cities all over the country, including Portland. Others who want to aid the movement may want to choose other tactics, like running for office.

“This is one grand experiment that we’re walking together,” Tometi said.