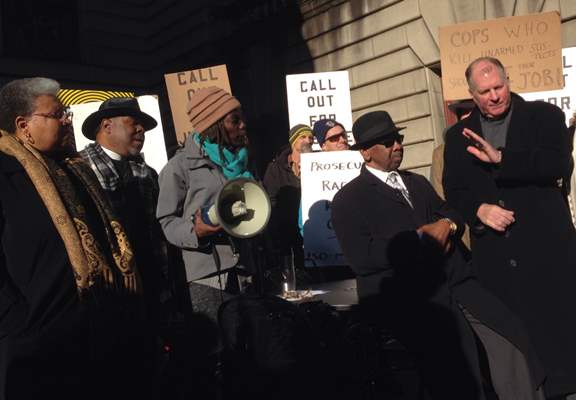 Mayor Charlie Hales isn’t happy about having to re-hire fired Portland Police Bureau officer Ron Frashour. Community activists aren’t either, and they’re asking the bureau to place Frashour in a desk job where his contact with the public will be minimal.

According to a ruling released last week by the Oregon Court of Appeals, Frashour must return to duty. In a statement released shortly after the ruling, Hales’ office put out a press release expressing disappointment in the court’s decision.

“The City of Portland takes use-of-force seriously, and demands that it be employed judiciously. Portland Police Bureau training emphasizes de-escalation, and while the vast majority of our officers perform exceptionally well, incidents like the tragic death of Aaron Campbell undermine that success,” Hales’ statement said. City staff later told a local television station they are reviewing the ruling and are considering taking the matter to the Supreme Court.

Frashour shot and killed Aaron Campbell in January 2010, and was terminated later that year. Campbell was an African American man whose brother had died earlier that day. A 911 caller reported Campbell was suicidally depressed, and requested a welfare check. When Campbell came out of his home, he was shot with a beanbag round, then ran and, witnesses said, reached for his waist. Some witnesses said it looked like Campell was touching the part of his abdomen that had received the beanbag rounds. Frashour reported he thought Campbell, who turned out to be unarmed, was reaching for his gun. Frashour then shot Campbell in the back with an AR-15 assault rifle.

The Albina Ministerial Alliance Coalition for Justice and Police Reform held a rally and press conference on the morning of Dec. 31, where they made it clear they would prefer Frashour not return to duty at all. However, they said if he must continue to work as a law enforcement officer, he should be placed “at a desk, in a corner, with no contact with the public at all,” and without access to firearms, Dr. T. Allen Bethel said.

The AMA also asked that the police department be reformed and that the Bureau, which is currently recruiting for more officers, not simply fill more positions, but make an effort to hire officers of color to better represent the city they serve.

“Can you name any other profession where you cannot be fired?” Rev. Mark Knutson of Augustana Lutheran Church asked the crowd of about 50 people at City Hall last week. “As a clergy, I know we will be fired and let go if we do something wrong.

AMA member Joyce Harris criticized the Court’s ruling, saying, “Read the 22-page ruling and you will not be less confused than when you started reading.”

The ruling hinges on whether a “public-policy exception” to reinstating an officer – that is an exception based on laws about use of force – can be made when an arbitrator has determined that an officer is not guilty of misconduct. “Put another way, the text of the provision indicates that the focus of the public-policy condition is on the consequence that an arbitrator imposes for an employee’s misconduct. Accordingly, if the arbitrator concludes that there was no misconduct, then the condition in ORS 243.706(1) does not apply,” the ruling states.

"For the seventh time, an independent review of Officer Ron Frashour's actions nearly six years ago has found that he fully complied with the law and with national and local standards for the use of force," said a statement from Portland Police Association spokesperson Daryl Turner, released on the day of the ruling.

A press release distributed by Portland Copwatch and announcing the rally noted the bureau has a history of officers with problems being assigned to desk jobs or other positions that minimize their interactions with the public. The release also notes that in other cases where a Portland officer has been terminated for lethal use of force and the case has gone to arbitration, arbitrators have ruled in favor of reinstating the officer. According to Hales’ statement, Frashour will be reassigned for reorientation training.