Should UO Change Name of Hall Named After Pro-Slavery Founder? 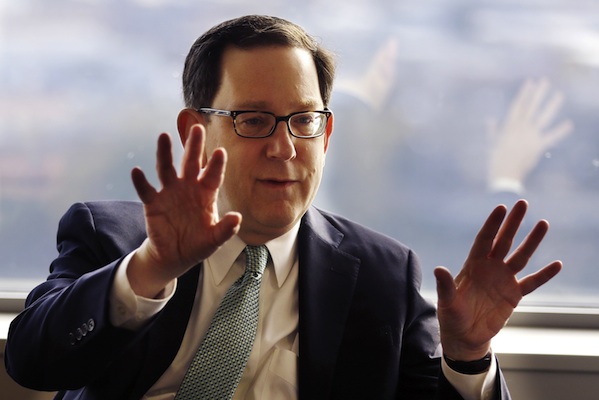 EUGENE, Ore. (AP) — University of Oregon alumnus Scott Bartlett pleaded the case of 19th-century judge and UO founder Matthew Deady at a UO Board of Trustees quarterly meeting on Thursday.

Deady is the namesake of the oldest building on campus and, in his day, was an outspoken advocate of slavery.

That historical fact has prompted some UO students in the Black Lives Matter movement to demand that the university remove Deady's name from the hall, and the university has launched a committee to consider the matter.

Similar conversations have been happening at other colleges and universities around the country.

Bartlett, a longtime Eugene resident and civic activist, told the UO board he's not averse to renaming a civic asset. In 2003, he noted, he participated in the drive to rename Centennial Boulevard, which runs between Eugene and Springfield, to honor civil rights leader Martin Luther King Jr.

Bartlett told trustees he wouldn't object if university officials opted to rename Dunn Hall, whose namesake, a professor, was reportedly a Ku Klux Klan member. And he suggested that the university could rename Willamette Hall for an African-American scientist.

But Deady was a key figure in the creation of the university, Bartlett noted. He pushed the school's charter through the Legislature, obtained money to build Deady Hall, and helped see the institution through some insolvent early years. He also was the first president of the UO's board of regents.

Deady also spoke and wrote blatantly racist commentary, according to historians. He and other territorial authorities put the question of slavery on the same Oregon ballot in which voters were asked to approve statehood.

They added a question to the ballot that asked whether free black people should be barred from the state. Voters approved both statehood and the exclusion, and the latter remained in the state Constitution for 69 years.

"Deady's life was not exemplary in the early stages, with regard to racist and backward views," Bartlett said. "But, just as we want our students to transform, he transformed."

Deady became the first federal judge in Oregon, and in more than three decades on the bench made key decisions upholding the rights of the state's Chinese population.

"He fought like hell against the harassment and brutalizing of Chinese immigrants, who were the largest minority then, and were in danger of being massacred in the (work) camps," Bartlett said.

Deady ultimately became one of the state's most respected and influential people, and a steadfast advocate for the university, Bartlett said.

"The point I'm trying to make is that when we finish our brief tenure here on earth, the good we do, as opposed to the ignorant or bad we do, has to be weighed," Bartlett said. "Deady's lasting legacy has to count for something."

Bartlett said he knows many other UO alums who are "quietly concerned, if not offended, by the possibility" that the university will rename Deady Hall.

UO President Michael Schill told the trustees that it's premature to conclude that the hall will be renamed. Schill previously appointed a committee of administrators, faculty and students to develop criteria for evaluating whether a name should be stripped from any campus building.

Schill also announced that he's appointed Yvette Alex-Assensoh, the UO's vice president for equity and inclusion, to lead the university's response to a dozen demands that black students presented to the university last month.
T

he requests are all reasonable, Schill said, but some would be expensive to implement and there may not be sufficient money to see them through. He pledged to be forthright about what the university can and can't do.

"My style is to be relatively straightforward, and I'm not going to sugarcoat some things," Schill said.

The black students' demands include creating a scholarship initiative for black students; making Ethnic Studies 101 a graduation requirement; and keeping and publishing data on efforts to increase black representation and retention among the student body.

Earlier on Thursday, trustees met in small groups with black students to hear about the students' on-campus experiences and their desire for more university support.

Trustees later pushed administrators to hire more black faculty and increase the number of black students on campus. Currently, about 1 percent of the UO's faculty and 2 percent of its students are black.

"One percent doesn't even represent (the size of the black population) we have here in Oregon," trustee Ann Curry noted. "We should be at 12 percent African-American professors and students — or at least moving in that direction."

"We've been stagnant at 2 percent for far too long, over 60 years," Colas said. "It's time for us to really focus on how do we increase those levels."

He urged Thompson to more than double the number of black students on campus, from 480 today to more than 1,000 five years from now.
Thompson, who has held similar administrative positions at the University of Alabama and Indiana University, said he's trying.

The biggest disappointment of my tenure at the University of Oregon, and I'm embarrassed by it, is we have not grown the African-American number," Thompson said. "In Alabama, where George Wallace stood in the door and said we're not going to integrate, we became the (campus with the) highest enrollment of African-American students in the South."

Schill said the UO has stepped up its faculty hiring to improve its academic standing, with a goal of a net increase this school year of 20 to 25 new faculty. With replacements for retiring faculty, the university now has 40 ongoing faculty searches, and increasing diversity is a key objective, he said.

Schill said the pipeline of black job candidates is small and the market for those candidates is competitive, but he said the university is committed to increasing the number of black hires.

"Provosts, deans and department heads have all been talked to about this," the president said.
___
Information from: The Register-Guard, http://www.registerguard.com