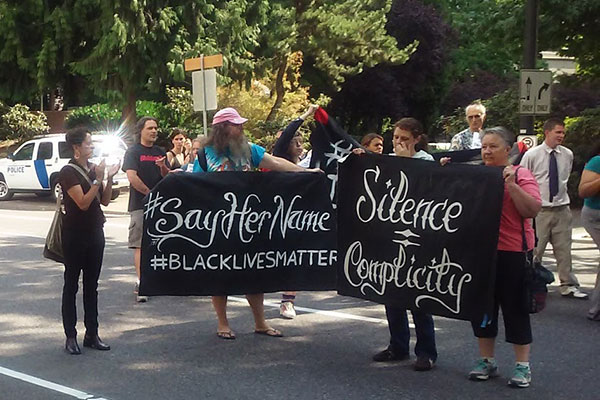 Attorney general Ellen Rosenblum confirmed Tuesday that an investigator with the Oregon Department of Justice had conducted digital surveillance on those who had used the #BlackLivesMatter hashtag on social media.

The confirmation came after Urban League of Portland President and CEO Nkenge Harmon-Johnson sent a letter addressed to Rosenblum, saying her husband, Erious Johnson, the DOJ’s director of civil rights, had learned he was profiled by his own agency. The letter, which was signed by seven other civil rights and labor leaders, was shared with media and posted to signing organizations’ websites.

Rosenblum’s office did not reply to The Skanner’s request for comment, but did release a statement saying she was “outraged” by her office’s use of digital surveillance.

“I recently became aware that an employee of the Oregon DOJ Criminal Division was conducting a digital search of Twitter hashtags including #blacklivesmatter,that led him to the Twitter account of a close and trusted member of my inner circle staff, Erious Johnson Jr. I informed Mr. Johnson of this, told him that I was outraged by it, and that I had immediately ordered a stop to it.”

Rosenblum also told The Oregonian Tuesday an investigator used an online search tool to look up Twitter hashtags as part of threat-assessment work, including use of the #BlackLivesMatter hashtag by users in the Salem area.

That investigator, who she did not name, has been placed on paid leave, and there may be others, Rosenblum said. She also told The Oregonian she has hired an investigator to look into the department’s use of digital surveillance.

Harmon Johnson declined to comment, deferring to others who had cosigned the letter. Shortly after her letter posted, the American Civil Liberties Union of Oregon put out a press release with statements from director David Rogers and legal director Mat dos Santos.

“Under Oregon law, it is illegal for state law enforcement to gather information about people’s political, religious and social views, associations or activities. Not only is such profiling illegal, but it seriously threatens our democracy by chilling First Amendment speech and activities. We encourage the Attorney General to take immediate action and support a full and transparent investigation,” Rogers’ statement said.

Mat dos Santos, legal director for the state, said, “Oregonians deserve to know the full extent of the state’s involvement in this illegal and racially-based surveillance. In response to these incidents, we are preparing to file records requests to reveal the scope of the program and who else was caught up in this dragnet.”

“I believe that she didn’t know what was going on,” James said of Rosenblum. “The key question is to what extent it was going on. Was this a single individual or a coordinated effort? Was there federal collaboration? How long has this data gathering been going on? All of these questions need to be answered. I think it’s good that the AG has appointed an independent investigator to do this. I think it’s important that the investigator partners independently with myself and the afflicted groups to ensure the investigation is thorough and asks the right questions.”

The phrase has also been used by protesters and organizations not connected to the organization, including Don’t Shoot Portland, which held its first public demonstration in August 2014.

Harmon Johnson also released a letter to Urban League members Tuesday hosted on the Urban League’s site in which she said she spoke for herself and her family only, expressing dismay that simply using a hashtag intended to express solidarity would make one subject to state surveillance.

“When there is probable cause to suspect that a crime has been committed, law enforcement can and should investigate,” Harmon Johnson wrote. “But what motivation could the Oregon Department of Justice Criminal Justice Division have had for conducting a threat assessment of my husband in the first place, let alone creating a file, and delivering it to the Attorney General, for further action? Yet, when nothing threatening was found, the department continued its investigation and escalation. If they labeled him a threat, who else is being wrongly targeted in this way?”

During a Wednesday-afternoon interview on Oregon Public Broadcasting’s “All Things Considered,” Rosenblum said the investigator had used a tool called Digital Stakeout. The company’s website describes it as a “cloud-based threat intelligence platform that mines the web in real-time and reveals what matters.” She also said the surveillance may have been illegal and a criminal investigation may be warranted.

The ACLU of Oregon notes, in a statement on its website, the surveillance is a violation of a state law passed in 1981 prohibiting the collection of information about “the political, religious or social views, associations or activities” of any individual or organization unless it is directly relevant to a criminal investigation.

Rosenblum is also leading a law enforcement racial profiling workgroup, established by House Bill 2002, which passed out of the legislature this year. The workgroup includes Kayse Jama, one of the signers of Harmon Johnson’s letter.

The Urban League is encouraging members of the public to share stories, concerns, questions or support regarding state surveillance by writing to WeMatter@ULPDX.org.