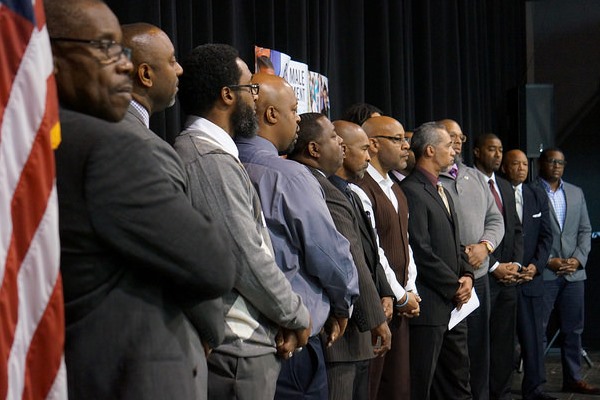 After a three-day conference of organizers working nationally to better the outcomes for Black men and boys, the general mood was one of urgency as organizers prepared to return to their respective cities.

Thirty-five representatives from six cities convened in Portland from Oct. 14-16 to discuss the Black Male Achievement and different strategies to better effect, the program’s four core areas of concern: education, employment, family stability, and ending the disproportionate representation of Black males in the criminal justice system.

As the conference came to a close, on the top floor of the Marriott hotel downtown, many participants commended the Portland conference for what they viewed as progressive work on the front of restorative justice.

Local Black Male Achievement organizer, C.J. Robbins cautioned that there is still much to be done in the city.

“There are [schools] that are struggling with implementing restorative justice with any kind of fidelity. There are organizations that just pay lip service. And as you go further out [in East County], you’ll see more of the hurting. It’s just like any other gentrified area, where people are being pushed out to an area where they are not welcomed,” Robbins said.  “I just want to be honest about what Portland is facing.”

Mayor Charlie Hales, who interacted with the conference intermittently during the three days, agreed with Robbins adding that the City has underinvested in African Americans for decades.

Activist and author Eric Grimes, of the New York faction of Black Male Achievement, said there must be innovation in how Black lives are not only bettered from a policy level, but perception as well.

Despite the relatively small Black populations in both Portland and the state of Oregon, conditions for African Americans tend to follow national statistics.

Grimes likened Oregon’s founding, as a state to exclude Blacks, to a mentality reflected in greater America.

The adoption of the Black Male Achievement program in Portland came in part as a response to a resolution passed by the 2013 US Conference of Mayors in Washington D.C., in which they stated every city should strive to promote achievement among black men and boys through both opportunity, policy, programs and strategies.

Locally, the program is helmed by a host of representatives who’ve been involved in Afro-centric civic work years for decades and different city and educational entities including, the Urban League, NAACP, Portland African American Leadership Forum, Self Enhancement Inc., Portland Police Bureau, The City of Portland and others.