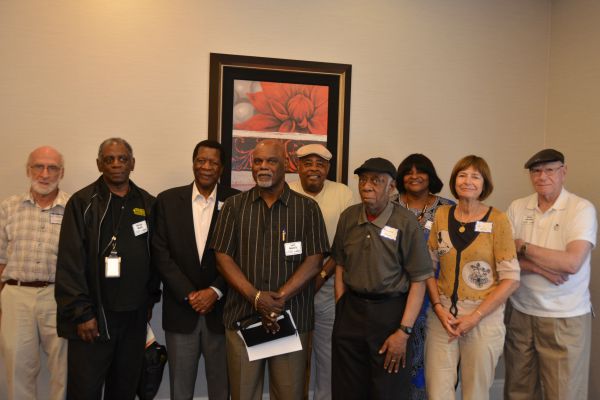 Last week marked the 10th anniversary of the Hurricane Katrina disaster. One of the deadliest storms in American history, Katrina caused deaths, flooding and destruction -- and decimated a vibrant Black community.

It was a fitting time to remember another flood, which occurred over 67 years ago, the Vanport flood.

Last Friday The Skanner News hosted a showing of its oral history project, “The Wake of Vanport,” to over 200 people at the downtown Embassy Suites hotel ballroom. The media piece showed a series of short films capturing the experiences of those who lived in Vanport before the flood.

“The Wake of Vanport” was a partnership between The Skanner Foundation and the North Portland Media Training Center which paired survivors from the 1948 disaster with media producers. There were a number of survivors in the audience who shared their experiences and might participate in the next volume of Vanport stories.

Click on the slideshow below to view images from the event:

Portland City Commissioner Nick Fish spoke briefly before the showing of the film. He talked about the importance of storytelling and how stories define communities.

“Some would say our story is told through Portlandia. That’s not our story, that's not the story of people and struggle and challenge,” Fish said.

For him, Vanport was the story of a thriving town that was once the second largest city in Oregon, which was wiped off the map in a matter of days. The initial optimism and harsh aftermath both define and decry the Portland spirit.

The city of Vanport was a quickly constructed public housing project built to house Kaiser Shipyards workers during the Second World War. Located on swampy lowlands between Portland and the Columbia River, Vanport was home to over 40,000 people at its peak.

The wartime work brought workers from all over the country searching for opportunity. Vanport offered furnished houses, schools, recreation centers and a movie theatre. Over 40 percent of the population of Vanport was African American.

The hot summer and major rainstorms swelled many of the tributaries leading to the Columbia. Water levels rose, and on Memorial Day, May 30, 1948, the dam protecting the low-lying city burst. A 10 ft wall of water surged into the city, overturned cars and knocked buildings off their foundations.

Only 15 people lost their lives to the flood, but the city was completely destroyed.

“The Wake of Vanport,” captures what is left of the city, photographs from albums that were rescued from the houses and memories of those who lived there.

The stories in the films are told through the eyes of the children of Vanport. The narrators share an idyllic memory of the city which was racially integrated during a time of heavy segregation. In this quickly assembled town that was built out of necessity, Black and White kids went to school together, played together and watched movies together.

Some survivors say they could see racial strife with their parents, but for their childhood, Vanport stood out as a place of hope that was too soon lost to the flood.

The narratives shared by the story tellers spoke of the aftermath; the pleasant childhood was soon replaced by a refugee story. Some families sought help from the Red Cross in the Kenton neighborhood where many businesses nearby served White people only.

Community historian O.B. Hill spoke about his family’s search for housing after the flood. He described housing projects, such as Columbia Villa, which were built on the outskirts of North Portland that became the ghettos of later years.

Many children of Vanport remembered the fear of having to leave the house while Sunday dinner was still cooking on the stove or baking in the oven.

In the short film “Scattered,” survivor Gloria Lavender recalls having to hurry out of the house, leaving everything behind:

She described walking out and even leaving their family car because there was no time to wait for traffic to clear as the flood waters rose.

Some left with barely more than the clothes on their back. When they turned to see their city, they saw nothing left but the rooftops of flooded buildings.

Josh Alpert, the chief of staff for Mayor Charlie Hales told the audience that there were many lessons to be taken from the lost city. He spoke of a city that offered good jobs, opportunities, progressive values and said Portland should emulate the best parts of Vanport.

“The Portland of tomorrow must be the fully realized Vanport of yesterday,” Alpert said.