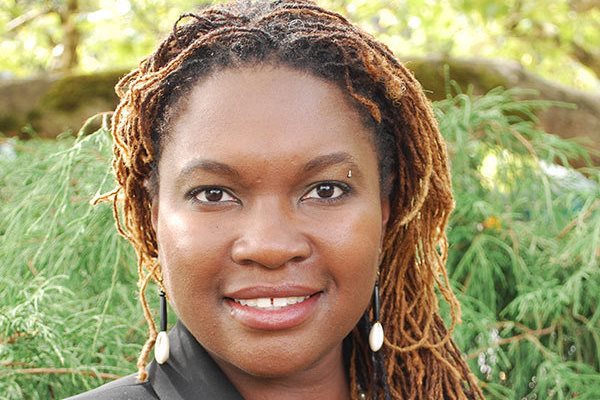 Nkenge Harmon-Johnson is new to her job, but not to the city.

About two months into her tenure as president of the Urban League of Portland, the Northeast Portland native told The Skanner News she is ready to continue the organization’s legacy.

Harmon Johnson left her post as communications director for former Gov. John Kitzhaber last year and stepped into her new role in April.

She assumes her new role at a time when – as highlighted by the second State of Black Oregon report, released this May  — Oregonians of African descent continue to struggle.

The wealth gap between Blacks and the state’s majority White population has widened since the report’s first publication in 2009. Nearly one-third are living below the federal poverty line, and in a state where Blacks are only two percent of the population, the high school graduation rate is the third worst in the country for Black students, and the worst overall.

The civil-rights attorney, who now lives in Marion County with her husband, attorney Erious Johnson, said the report highlighted two other important facts: Black Oregonians exist in every county of the state and still continue to thrive.

Acknowledging the increased dispersal of the state’s small Black population, she said he says the Urban League must “refocus its efforts” to create a more fortified community.

“The population here is different; the mission is largely the same: Jobs and education,” she said.

“Oregon does a terrible job at getting people out of high school -- Black, White or whoever,” Harmon Johnson told The Skanner News. This is [everybody’s] problem, and we can work on it all together. At the Urban League’s recent job fair, 55 percent of the people who showed up were Black. What’s that mean? That means the other 45 percent were everything else. The Urban League has always helped others.”

Part of those refocused efforts has included Harmon Johnson already assigning three staffers to the group’s new satellite office, housed at the Rosewood Initiative on 162nd Ave. and Stark Street, an area that has seen a major uptick in African-American and other underserved populations in the last decade.

Harmon-Johnson helped transition Midge Purcell, the Urban League’s longtime policy advisor, out of her position as she prepared for retirement in June. Working with predecessor Michael Alexander and other League staffers, she has split Purcell’s former job into two positions: a policy director and an organizing director.

The Skanner News sat down with Harmon Johnson at the Urban League of Portland’s headquarters to discuss her vision for the organization, upcoming elections, racist symbols and the role of community in Oregon.

The Skanner News: What do you hope to keep from your predecessor Michael Alexander’s work as president, and in what ways do you hope to differ your work at the helm of the Urban League of Oregon?

NHJ: I could not have had a better predecessor. He’s tremendously supportive of me, and I say that presently. One of the things I’m continuing from is work is Alexander’s commitment to accessing funds for the league. He did an excellent job at that and I will do right by the legacy.

One thing I intend to do is highlight the good work that we’ve done in 70 years. This organization is 70 years old. That’s older than most of the people talking about it. When you look back at any organization, whether it be Les Schwab or the Trail Blazers, there’s always rocky periods. But we’ve created things in this community. Some of the things even I have to learn about, like Big Brothers, Big Sisters -- that’s the Urban League. If we say we’re creating something new, that means you should bank on us. That’s what our track record says.

TSN: What is the role of community in the Urban League’s mission right now?

NHJ: When we talk to the people who hold the checkbooks for our community, simply, it is not enough. They’ll usually say [there’s a million dollars] we’re going to divide between these various community organizations. I would like to see more people join the Urban League. The community is great. When the Urban League calls, they answer. That’s because we call, we’re on the front porch. We call from their kids’ schools. We’re there.

What we do better is hold people accountable. There are people who make promises to our community and when they don’t deliver, there’s no price for them to pay, and it’s not enough for me [alone] to talk about it. The things we talk about when we’re in rooms together -- we need to not say something different when we’re in front of these powers that be.

Beyond holding the powers that be accountable, we need to become the powers that be. When I was a kid, there were more African Americans in the Senate [than there are now]. We need to put our names on the ballot and do the work to get elected.

TSN: With the recent removal of the Confederate flag from the capitol in South Carolina, there’s been increased talk around symbolism. Even here in Oregon, we have symbols that blatantly or covertly have roots in racism, past and present. And even in our capitol, there are flags that continue to fly there that either have the Confederate flag ingrained into the artwork or are based on the Confederate design.

NHJ: Symbols matter. That’s why we have them. Every state has a flag. I think we’ve seen the power of removing it. I think it wouldn’t matter to us when we see Bree Newsome climb the pole, or that brother in uniform helping the older White man suffering from heat exhaustion down in South Carolina if symbols weren’t important.  They offer a gateway for additional work that needs to be done.

TSN: You spoke of the election season, both locally and nationally, earlier. What’s your take on the current President? Some say he hasn’t done enough for the Black community as the first African American president. With that, in recent weeks he’s been making a lot of noise about the need for criminal justice reform,  even going so far as to visit a federal prison and becoming the first president to do so.

NHJ: We all know when America catches a cold, Black folks catch the flu. I think the President has done a wonderful job at reviving the auto industry, forgiving student loans ‑‑ and more of us have healthcare. More of us are employed now. He’s faced tougher questions than any one before him and that’s because the color of his skin. I think he and his family have handled it adeptly.

So I reject the notion that he hasn’t done anything for the Black community. Could he have done more? Yep. So could have Bush, so could have Clinton, and I hope the next President does. Speaking from a federal prison shows us what his values are.

I’m pleased and I hope our governor and Congress see that and refocus on our criminal justice system. As a state and a country, we spend too much on locking people up. As a taxpayer, I’d much rather spend money on educating people.

TSN: As a native Black woman in Oregon, what is the best part of being an Oregonian to you?

NHJ: I get to be myself every day and do the work I love in a place I enjoy living. I could live any place in the country, but I couldn’t find a place I wanted to be more than Oregon. We have a lot of work to do to live up to our ideals. Our population is small, around 3 million. We don’t have to do what California has to do, or even Washington state does to improve our [quality of life]. That’s a real opportunity for us.

There are too many African Americans not benefiting from the current upswing in the jobs market here in Oregon. And we can change that—together. It’s not just the work of the Urban League, it’s the work of all civic organizations, the county, the city, the state, elected officials. 2016 is a big election year both locally and nationally. The Urban League will make our presence in both fields, no matter the party.