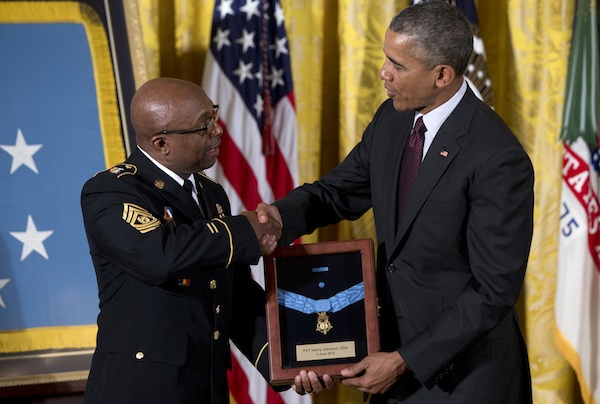 A small delegation from Portland was among the audience at the White House, June 2, when President Barack Obama awarded the Medal of Honor to two war heroes. Almost 100 years after their acts of bravery, Army Sergeant William Shemin and Army Private Henry Johnson were recognized for their “conspicuous gallantry” during World War I. 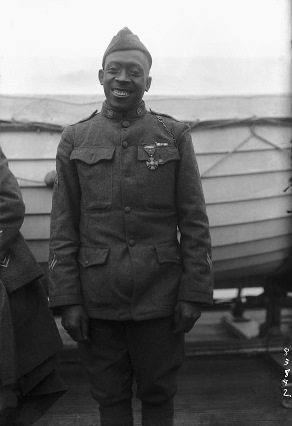 Portland City Commissioner Nick Fish, George Hocker, public advocate for Multnomah County Commissioner Loretta Smith and The Skanner’s Publisher Bernie Foster have a special interest in the awards, especially the award to Henry Lincoln Johnson. They helped launch a campaign to secure the Medal of Honour for Henry Lincoln Johnson in 2010 after learning that the French government had awarded him its highest honour: The War Cross with a Golden Palm.

The Skanner wrote more than 10 stories following the progress of the campaign and telling the story of the Harlem Hellfighters. Our editorial: Two Brave Soldiers Two Medals of Honor won an NNPA Merit Award.

Genealogist Megan Smolenyak discovered the records we found were not always accurate - the soldier's birth name was William Henry Johnson, for example. And the family who claimed Johnson and were inspired by his legacy were shocked to learn they were not actually his blood relatives. Yet the substance was correct: Henry Johnson was a hero at a time when black heroism went unrecognized.

The White House announced the awards with a press release saying: 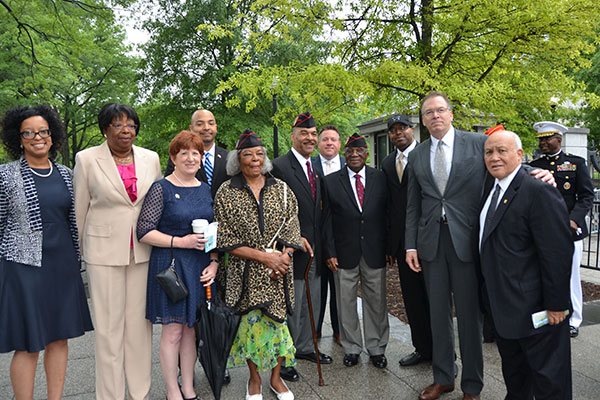 (Photo: Guests who had come to honour Henry Johnson gathered before the White House ceremony)

Private Henry Johnson received the Medal of Honor posthumously for his actions while serving as a member of Company C, 369th Infantry Regiment, 93rd Division, American Expeditionary Forces. Then-Private Johnson distinguished himself during combat operations in the vicinity of the Tourbe and Aisne Rivers, northwest of Saint Menehoul, France, on May 15, 1918.

Private Johnson entered the Army on June 5, 1917. He was assigned to Company C, 15th New York (Colored) Infantry Regiment, an all-black National Guard unit that would later become the 369th Infantry Regiment. The Regiment was ordered into battle in 1918, and Private Johnson and his unit were brigaded with a French Army colonial unit in front-line combat.

While on night sentry duty on May 15, 1918, Private Johnson and a fellow Soldier received a surprise attack by a German raiding party consisting of at least 12 soldiers. While under intense enemy fire and despite receiving significant wounds, Johnson mounted a brave retaliation resulting in several enemy casualties. When his fellow soldier was badly wounded, Private Johnson prevented him from being taken prisoner by German forces. Private Johnson exposed himself to grave danger by advancing from his position to engage an enemy soldier in hand-to-hand combat. Displaying great courage, Private Johnson held back the enemy force until they retreated.

Sergeant William Shemin received the Medal of Honor posthumously for his actions while serving as a member of Company G, 2nd Battalion, 47th Infantry Regiment, 4th Division, American Expeditionary Forces. Sergeant Shemin distinguished himself during combat operations in the vicinity of the Vesle River, Bazoches, France, on August 7-9, 1918.

Sergeant Shemin entered the Army on October 2, 1917. He was assigned as a rifleman to Company G, 47th Infantry Regiment, which moved from Syracuse, New York to Camp Greene, North Carolina, joining the 4th Infantry Division. The Division arrived in France in May, 1918.

While serving as a rifleman from August 7-9, 1918, Sergeant Shemin left the cover of his platoon’s trench and crossed open space, repeatedly exposing himself to heavy machine gun and rifle fire to rescue the wounded. After officers and senior non-commissioned officers had become casualties, Shemin took command of the platoon and displayed great initiative under fire, until he was wounded, August 9.

Ms. Elsie Shemin-Roth of Webster Grove, Missouri accepted the Medal of Honor on her father’s behalf.