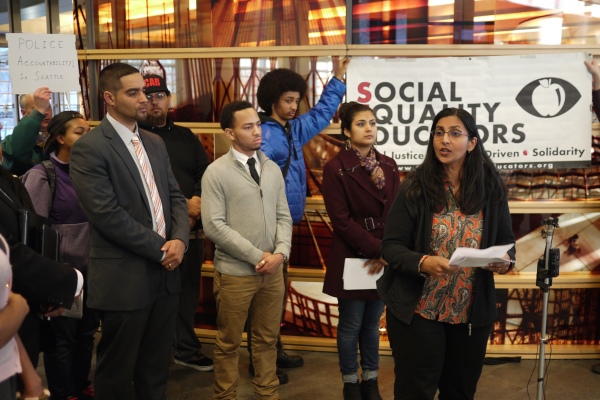 Every one of the juniors at Nathan High School in Seattle followed a growing trend in schools across America last month by deciding not to take the Smarter Balance Assessment Curriculum—an exam designed around the controversial new Common Core standards.

The 280 students will be earning a “0” for their boycott of the new test, but according to a Seattle Public Schools spokesperson, it’s an exam many juniors don’t need in order to graduate.

However, their protest of Common Core will leave schools with lower passing rates and could lead to loss of funding, Seattle Public Schools spokesperson Stacy Howard tells The Skanner News.

“Without these assessments, teachers and families would not have a common measure of how students are progressing toward academic goals,” says Howard. “We need the results to determine which resources and supports are needed to improve achievement and close the opportunity gap.”

So far, Oregon is seeing a more than 5 percent opt-out rate in Portland Public Schools alone during its first year of implementation.

Contrary to trends from its neighbors to the north, it’s Portland public’s youngest students that are pulling out in droves: Creative Science K-8 and Metropolitan Learning Center already have more than 30 percent of their 200-plus kids out, and Abernathy Elementary School tops the list with over half of its 253 kids shaking their heads “no” to the Common Core.

Charles McGee, president of Portland’s Black Parent Initiative, says his staff has gotten their share of questions from concerned parents wondering how these Common Core standards will affect their children.

Next year, he says, the group will begin teaching parents in depth about Common Core and the pros and cons of opting out.

In Seattle, high schools like Roosevelt, Ingraham and Garfield -- where testing hasn’t even begun yet -- opt-out rates for juniors are near 50 percent and expected to grow.
Garfield history teacher and prominent education reformist, Jesse Hagopian has been a leading voice in boycotting the Smarter Balanced Assessment which he says sets students up to fail.

“The cut score for SBAC testing was deliberately set so as to fail around 60 percent of the students who take the test,” he said at a press conference with the King County NAACP in April. “None of us teachers got into our profession to demoralize students and we find this political decision to artificially create mass failure reprehensible, and pedagogically unsound.”

The new standards for math and reading are said by supporters to better prep students for college and career readiness and help the U.S. better compete on the world stage.

Though not required, the Common Core standards have been adopted by every state in the nation over the last five years, excluding only Alaska, Virginia, and Oklahoma.
America has been noted as falling behind in educational achievement in the last three decades. According to the Programme for International Student Assessment, the U.S. ranked 37th in its most recent exam; countries like Singapore, Taiwan, and South Korea topped the lists.

Though poverty has long been proven as a major factor in terms of outcomes in the classroom, the top three performers on the list have higher rates of poverty than the U.S.
An alignment study between the Common Core standards for math and the Programme for International Student Assessment supported claims that American students would “yield significant performance gains” under the criteria.

Nonetheless, America’s pupils continue to rail against the standards.

In New York state, home to the biggest school district in America, opt-outs have increased three fold from 66,000 in 2014 to an already unprecedented 184,000 -- a number sure to climb in the coming weeks and months.