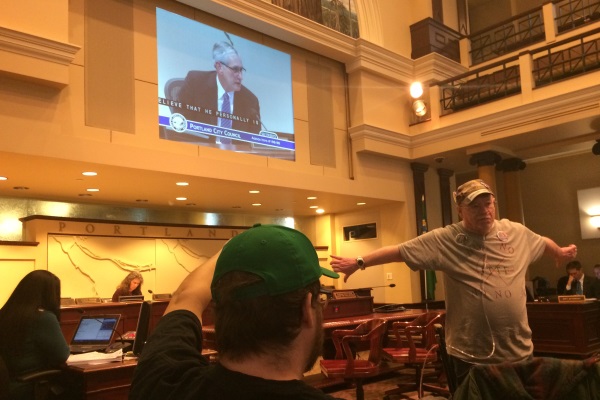 A protestor turns his back on Charlie Hales as the Mayor casts his vote for the City of Portland to join the Joint Terrorism Task Force. Up until the split decision by City Council to become full partners with the task force which pairs local law enforcement with the FBI to share intelligence on terrorism, Portland was the only major city working with the JTTF part time. Photo by Donovan M. Smith

Portland joins the ranks of every other major city in the United States as full time members of the Joint Terrorism Task Force, despite a bitter outcry from Civil Rights organizations and a large cross-section of Portland’s Muslim community.

Now, after the City Council’s divided 3-2 vote to join, two Portland Police officers will be working full-time as part of the JTTF. The task force partners local law enforcement with the FBI to combat international and domestic terrorism – but critics argue the JTTF unfairly targets innocent people and that even top city leaders will have no ability to know or track, let alone control, what Portland police officers might do as part of the “team.”

“We find it hard to believe that after written and verbal testimony from the ACLU, the Japanese American Citizens League, Jewish Voice for Peace, eleven prominent Portland-area Muslim organizations, former State Senator Avel Gordly, and dozens more people against re-joining the JTTF, with the only organization in favor being the Citizens Crime Commission of the Portland Business Alliance, that Council voted to re-join the JTTF,” wrote Portland Copwatch’s Dan Handelman.

See Lisa Loving Of The Skanner News’ report detailing the history of unfair profiling by the FBI of mostly Muslim men from the Pacific Northwest here.

Handelman, a police accountability activist, in past years unsuccessfully tried to sue FBI officials over surveillance of a grassroots organization he is affiliated with, Peace and Justice Works.

In 2005, Portland became the first and only city to pull out of its partnership with the JTTF, only to re-join on a “case-by-case” basis in 2011 following the controversial plot to let of a bomb in Pioneer Square a year earlier.

City Council is sitting down to hammer out a Memoranda of Understanding, detailing the structure of the partnership Feb. 25 at 3 p.m. at City Hall.

Mayor Charlie Hales called his vote to re-join one of the hardest decisions he’s had to make in office.

“It’s a choice of evils,” Hales told The Skanner News. “The FBI has done things I can’t condone, and the federal government has done and is doing things that I think are unacceptable. And yet we have to deal with this threat of our citizens being killed or injured by people who seem to have no regard for life and human freedom.”

Hales, who voted in the early 2000’s against joining the JTTF as a Commissioner, says that his current decision was “51-49” but that the City and police bureau will step up outreach with communities that could feel especially threatened by the decision to become full partners.

Commissioners Dan Saltzman and Nick Fish voted with the mayor to rejoin, while Commissioners Steve Novick and Amanda Fritz took a stand against.

Mayor Hales—who is also the police commissioner--still will not have security clearance which would allow him better insight into the specific activities of the partnership. However, now he will have a non-disclosure agreement which he did not have before.

Conversely, Chief O’Dea will have a non-disclosure agreement. When asked if he would have felt as comfortable to vote to re-join under former Police Chief Mike Reese, Hales replied “No, in a word.”

“Mike Reese did a good job. But because I recruited Larry and we’ve had a lot of conversations about what matters, we know each other very well,” Hales said. “I think we have a chief there that the community can rely on. I think a lot of people in the community already have that sense about Larry that when he talks about equity, relationships, and serving the whole community they know he really means it."

The mayor says if he’s not satisfied that he’s properly informed on the happenings of the JTTF he’ll “pull the plug” on the City’s involvement but did not provide a time-frame.

Handelman argues that City Council should reconsider their vote, and not sign the Memorandum of Agreement with the FBI this week.

In an open letter sent Monday morning to all five members of the Council, Handelman lists four items in the proposed ordinance that should be changed if the city decides to go ahead with the JTTF.

1--In addition to the termination clause (paragraph XXII-A which allows either side to terminate the agreement with 60 days' notice) there should be an annual sunset clause so that Council and the community can continue having this important conversation. The 2000-2005 version of the MOU [memo of Understanding] included authorization for FBI reimbursement of Portland Police overtime, which required annual consideration by the Council.

2--The annual reconsideration of the MOU should come with transparent reporting on how many investigations the PPB officers have engaged in, what level of inquiry was involved (assessments, preliminary investigations, full investigations), and affirmation of training by the City Attorney or a state authority on Oregon's "181 laws."

3--Any section which indicates that the Portland Police must comply with FBI rules or lose the ability to control documents that they have created, or which creates broader protection for the FBI than for the PPB or the public, must be amended (paragraphs V-B-3, V-B-5, VIII-A, IX-A and Section VII, for example).

4--The local chain of command must be unbroken and transparent. The agreement says that officers can't talk to any supervisor who does not have security clearance (paragraph VI-A-4), which means the Police Commissioner, as we've discussed for years, can't supervise his own officers. Furthermore, Chief O'Dea today declined to tell us the name of the Criminal Intelligence Unit Lieutenant who presumably is ensuring compliance with Oregon law and Portland Directives. This is unacceptable.

A letter from the District Attorney responding to our 2013 public records request for a roster of PPB personnel noted that "there is a compelling public interest in police oversight and transparency... that has been satisfied by the voluntary disclosure of... the command staff of the various divisions." The roster we received does not identify the CIU Lieutenant and thus is arguably in contradiction to the DA's letter.

There are over 100 JTTFs in the United States—up until this vote, Portland was the only major city not participating full time with the agency. The newly constructed $60 million FBI headquarters for Oregon still remains the only one without an office dedicated to the task force—though that could change after the Feb. 19 vote.