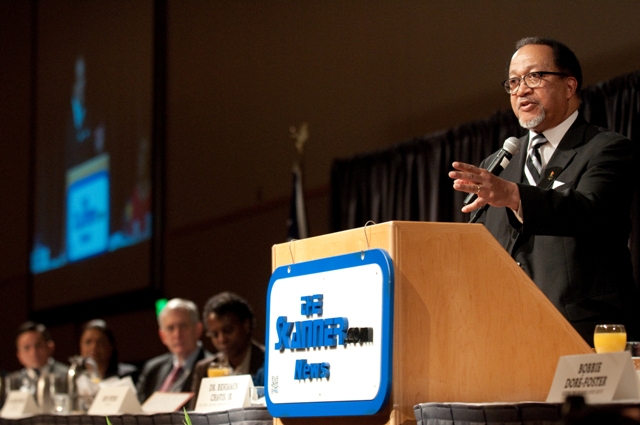 The International Business Times put The Skanner News King Breakfast on its short list of “Best events to celebrate birthday and life of Martin Luther King Jr around the US.”

Keynote speaker, the Rev. Benjamin Chavis, CEO and President of the national Newspaper Publishers Association, used the event to announce an NNPA trade initiative with Cuba with The Skanner News’ Bernie Foster at its head.

The newspaper’s civil rights award, the Drum Major for Justice, was given to the Albina Ministerial Alliance Coalition for Peace and Justice Reform, represented at the event by Dr. Leroy Haines.

"We're not here to celebrate," Foster says. “We're here to make sure that Dr. King's work is carried on.”

Also honored was the Oregon Historical Society for its project digitizing all The Skanner News print and digital photo archives. Kerry Tymchuck, director of the Society, accepted the award.

"I was asked, why are you going to Portland? Because to me this is a trendsetting city,” Chavis said. “Portland represents progress."

Chavis specifically cited immigration reform as part of the Black agenda nationwide, as well as prison reform. But one area was especially key in his analysis.

"Education is the single most important thing that can lead to success in a person’s life," Chavis said.

Many college scholarships were awarded by sponsors at The Skanner News Martin Luther King Breakfast, including: