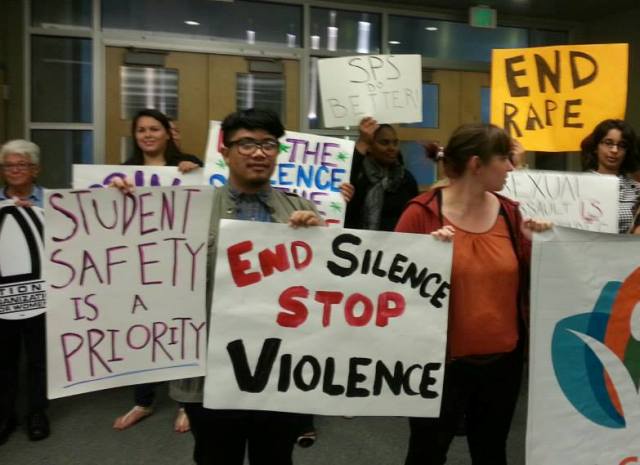 The family of an unidentified Garfield High School rape victim has started a Facebook group called 'Stop Sexual Assault in High School,' which has posted images of protests at Seattle School District meetings such as the one above.

A two-year struggle for justice over a 15-year-old Garfield High School student’s alleged rape on an overnight school field trip has apparently ended with a $700,000 settlement for the teenaged girl and her family.

However the uproar over the incident – first reported by Al Jazeera but then picked up by national and local news outlets and blogs  – is unlikely to end anytime soon.

The U.S. Department of Education opened an investigation into the assault in August of this year, and judging by the Seattle School District’s public statement Wednesday, some of its new policies appear to be aimed at beefing up the district’s compliance with federal law.

Schools officials released the statement but at the same time signaled they would not be answering any questions about it.

“Please note, the school district will not be providing any interviews,” the statement said.

The proposed settlement with the girl’s family goes before the school board for approval on Oct. 15; district officials say the settlement must also be approved by a court-appointed official “who will assure the female student's rights are protected. “

Neither the girl nor the boy who admitted to school officials that he raped her have been identified; the facts of the assault have been reported widely and even school officials do not deny that the boy admitted anally raping the girl even though she repeatedly said “no.”

However the district’s position is that even though the girl reported the rape and was hospitalized, a subsequent District Attorney investigation was “inconclusive,” as was the district’s own investigation; the family disputes that and has publicly claimed the district selectively released public records that left out details of the police investigation’s conclusion.

“While the settlement does not hold the district liable for the incident, district officials do consider this a fair settlement that allows the district to focus its efforts on improving our processes to prevent and respond to incidents of sexual harassment, and provides funds for the student to pursue her education,” the district’s statement says.

“Since the incident, the district has focused on improving overnight field trip procedures and working to ensure compliance to the federal Title IX mandates, which cover response to sexual harassment.”

The victim’s parents say she went from being an academically successful student and gifted musician to being withdrawn and suicidal; she never returned to Garfield after the attack, but instead spent time in an inpatient mental health facility. She and her family have moved out of state.

“Our entire family was devastated when our family member was raped on a public high school field trip,” the Facebook community page says. “The Seattle School District’s failure to extend her federal Title IX rights, to acknowledge her report of sexual assault, and to treat her with basic human dignity has been life-scaring beyond description.

“We have relentlessly pursued accountability so that something positive for others may come from this tragedy.”

The boy received a 10-day suspension from school in 2012 but then returned to class as usual. Meanwhile, demonstrations have been held at Seattle School Board meetings calling for the resignation of Garfield Principal Ted Howard and a Change.org petition urging the district to fire him now has more than 2,400 signatures.

“I am a student at Garfield,” one petitioner writes. “My close friend was raped at a School Dance freshman year. Nothing was done in response to multiple reports.”

“As a former site administrator I am very concerned about this incident and how the school personnel handled it,” another petitioner writes. “The first duty of a school, more important than educating students, is to ensure that all students are safe. This was a failure.”

According to the district’s Wednesday statement:

“As a part of the mediated settlement, the parents have agreed not to pursue any monetary claims against the district, and to dismiss all of their pending actions in front of the Office of the Superintendent of Public Instruction (OSPI), the Office of Civil Rights, and anywhere else. They have also agreed not to pursue any new actions, or to file further public records requests with the district. They have also agreed not to communicate further with the district regarding this incident or subsequent response action, and to not publicly identify or complain about the male student accused of the assault.”