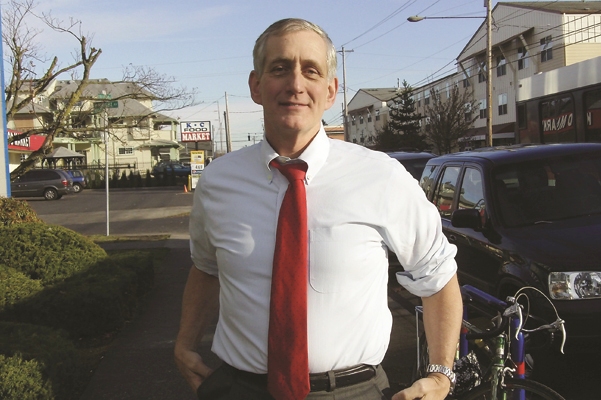 It looks as if peace will reign at the corner of Alberta Street and Martin Luther King Jr. Boulevard after all.

Mayor Charlie Hales announced this morning that the streetcorner lot that tore communities apart over a proposed Trader Joe’s store will be the home of Golden, Colo.-based Natural Grocers, an affordably-priced national chain known for “free nutrition education and healthy food.”

Kemper Isely, co-president of Natural Grocers, is in town today to stand with the Portland Development Commission in making the announcement about the empty lot – where large signs announcing the new store are already being erected by Colas Construction, the prime contractor for the development.

“I grew up and now reside in North Portland and I am honored to have Colas Construction lead a project that will deliver real jobs, real amenities and real opportunities for neighborhood residents,” said Andrew Colas, president of Colas Construction, in a statement this morning. “I want to thank Majestic Realty for the commitment to us, to this neighborhood and to this project. I am so excited to break ground.”

Earlier this year a handful of community organizations as well as small groceries already operating in the neighborhood protested a proposed Trader Joe’s store on the site because, in part, the groups were not at the table when negotiations were made between the City, the corporation, and California-based Majestic realty Company, which actually owns the land.

“The challenges this development has faced have been well documented,” Mayor Hales said in a statement this morning. “But thanks to the determination of the public and private partners involved, we’re now able to present a development that will benefit the residents of Northeast Portland, support neighboring businesses, introduce Portlanders to a high-quality, affordable grocer and revitalize a parcel of land that has sat dormant for 15 years.”

In the statement announcing the new store the Mayor’s office said:

The Portland Housing Bureau, led by Commissioner Dan Saltzman, is conducting a community involvement process to develop a North/Northeast Neighborhood Housing Strategy to help direct that investment. Natural Grocers is a Colorado-based chain with stores in 14 states. The company currently has seven locations in Oregon, including four in the Portland area, as well as a new store set to open in Eugene on Sept. 23.

“We have felt instantly at home in Oregon and the Portland area and are very excited to partner on this new development and start building a lasting and beneficial relationship with the community on Portland’s Northeast side,” Isely said. “The values Portlanders embrace around fresh, local food; resource conservation; and community involvement are perfectly aligned with the business model we’ve had in place since my parents founded the company nearly 60 years ago.”

Beyond a place to buy healthy food, the new store brings many additional benefits to the Northeast Portland community, including; an on-site credentialed nutritional health coach, provided at no charge, to answer questions, help with meal planning and provide one-on-one nutrition counseling, along with other free nutrition education options like cooking classes and demonstrations, and lectures on topics of interest to the community. “We work hard to make healthy options affordable so that customers feel empowered in our stores,” Isely added. “We are deeply committed our neighbors and we look forward to being part of the Portland community for years to come.”

Preliminary design work will start in early September. In addition to Natural Grocers, the development, when complete, will include commercial and retail space to house between four and 10 businesses.

A community benefits agreement and elements of the project design will be developed by a project working group. The group will include representatives from nearby neighborhood, business and community associations and will be formed in the next few weeks. Their work will inform the overall project design and development.