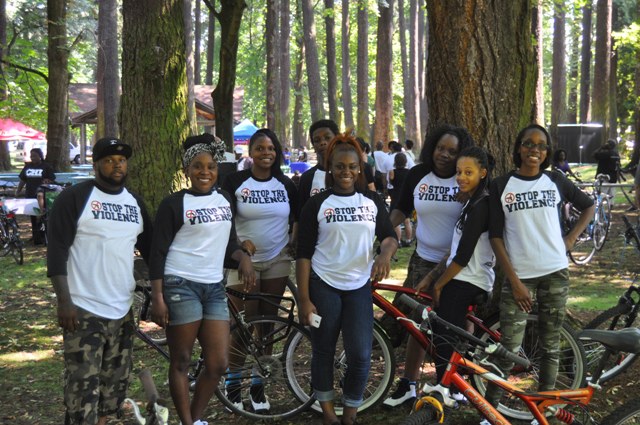 The Take Back the Streets ride on Sunday, Aug. 4, was an historic event. Photo by Melinda Musser

The Community Cycling Center is on a roll.

After hiring Mychal Tetteh as chief executive officer last summer, the organization boosted its community organizing staff in a bid for growth. Then this summer the Center hired North Carolina native Ernest Stephens as its Chief Operating Officer.

This month the organization – which for more than 20 years has operated a bike repair shop on Northeast Alberta Street – held its first-ever Bikes for Kids event in East County.

Then when Jason Washington of Brothers Gaining Equality through Excellence and community organizer DeMarcus Preston decided to start a “Take Back the Streets” movement against violence, the Center stepped up to sponsor their work with a big kickoff event last weekend.

After years of working to build grassroots support for bicycling in Northeast Portland, the Community Cycling Center has succeeded in transforming bikes from a symbol of gentrification to a tool for community empowerment for families that have been pushed out of the city center.

When The Skanner News met with Tetteh, his newborn son Andrew, Stephens and other staff in the group’s new office space in the Lloyd Center, the activists were modest about their achievement.

But their vision is big enough to include putting East County children on bikes, talking a stand against gang violence, and bringing leadership of color to a predominantly-white nonprofit group in a way that resonates across communities.

“What's beautiful about the bicycle is that it's a vehicle without walls. It is a vehicle that doesn't have barriers, and doesn't keep people out,” Stephens says.

“I see the challenges that we face in our society are complex -- I don't think they allow for a siloed or specialized approach in the way that we seek to address them,” Tetteh -- the former manager of Village Produce in New Columbia -- says.

“We want to find ways of growing prosperous communities.”

Tetteh is the former shop manager at the Cycling Center, and founded Portland’s Major Taylor Bike Club – named for the “fastest man on Earth,” Marshall Walter Taylor (1878-1932) who was the second known African American athlete to win a world championship in any sport (the 1-mile track cycling championship of 1899).

Stephens is a successful corporate entrepreneur and finance officer who grew up riding bikes. Attending the East County Bikes for Kids event this month rocked his world.

The December Holiday Bike Drive is traditionally one of the splashiest projects the Cycling Center puts on every year. The event brings hundreds of children and their families to the Emanuel Hospital Atrium for a giant party including bikes, helmets, gear and safety training.

The East County bike event at the Rockwood Boys and Girls Club itself marked a sea change in the scope of what the Center does, or at least, where.

The Cycling Center gave away almost 100 bikes and helmets – with safety training and social services -- to kids whose families couldn’t otherwise afford it during the best time of the year to ride.

“I was there, and I saw the first kid get his first bike that he ever had,” Stephens says. “And that smile– that joy just meant so much.”

The new “Take Back the Streets” movement that has emerged under the Cycling Center’s umbrella has really captured Portland’s imagination – it is a development that most could only have dreamed of.

“Folks that have been exposed to violence in their communities decided to take a stand and work within an anti-violence framework to address some of the needs that they saw out there, and that they knew really well because they had experienced,” Tetteh says.

“They had already been getting together and riding bicycles as a group, but this was an opportunity to really showcase anti-violence and use a bicycle as a tool for helping to bring people together and get out and do something positive in the street,” he says.

“The street being this place at all of us are supposed to be able to share, right?”

Tetteh and Stephens say a big point of their work – aside from building healthy habits that can lengthen cyclists’ life spans -- is to help make Portlanders feel less isolated from each other.

“One of the things that we often forget when we talk about bicycles is that you get a whole host of co-benefits whenever you decide to choose bicycling as the tool or conveyance for any kind of engagement with others,” Tetteh says.

“Now what does that mean as it relates to folks really trying to break the cycle of violence right now?

Find out how to connect and get involved at www.communitycyclingcenter.org.