Are You Ready for the LOVE Challenge? 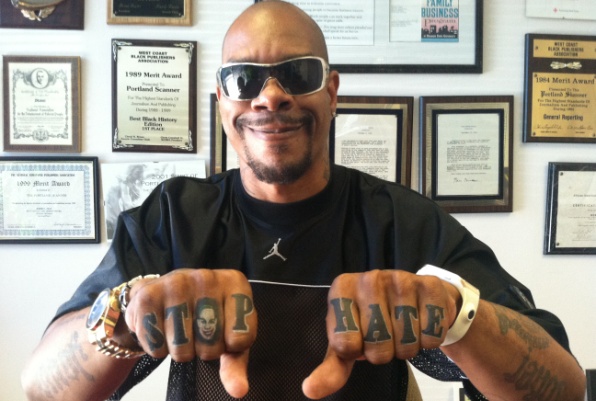 James Crittenden Sr. issued a challenge to his Portland friends last week. He calls it the LOVE Challenge: Let Our Vengeance End.

"It takes a real man or a real woman to do this," he says. "If you can approach someone and let them know, 'I'm sorry about what I did.' Or if they did something, to say:  'I want to let go of what you did. Let's not let this happen again. Let's just live life and be happy.'"

Last week Crittenden posted a video to social media where he reconciles with a former love rival, Cory. The two men fell out after they both fell for the same woman.

The video must have hit a nerve because it was shared on Facebook more than 3,400 times.

Crittenden says he was inspired by the ice water challenge, that was started to draw attention and funding to the muscle wasting illness ALS.  Thousands of people have joined in the challenge, dowsing themselves with buckets of ice-cold water and circulating challenge videos on social media.

"When I saw that I thought if people will pour ice on themselves, why wouldn't they go to somebody and say, 'I apologize'. Why hold on to a grudge when nine times out of 10 it's over nothing, something really small. Maybe you have a family member you have an issue with. Make amends with that family member."

You don't have to be best friends with your former opponent, Crittenden said. But letting go of the hate is good for everyone.

Crittenden understands pain as well as forgiveness. He first hit the news in 1979 as a crime victim, when he was just nine years old. His mother, Marla Betty Jean Moore was shot five times by a violent boyfriend, who then turned on James. Fortunately the gun was now empty, but the attack sent his mother to hospital for six months, he says, and left him traumatized. To this day, he carries around a newspaper article about the shooting and his mothers ID card.

Like many children who experience violence, Crittenden tried to be too tough to get hurt again. In his sophomore year at Madison High School he was charged with a gun offense and spent four years in detention.  At the time, he says, he had stopped speaking to one of his aunts over a minor disagreement. And while he was locked up, she died, leaving him sad that he had never made it up with her.

That was more than 20 years ago, and since then, Crittenden has lived a storied life. He worked at Intel for four years before being discovered by the modeling agent John Casablancas. He's also had acting roles in movies, such as Honeydripper and Dead by Sunset.

Osteoarthritis  has slowed him down, but he still loves acting, he says, and at Halloween he always dresses up as The Joker.

The LOVE Challenge is no joke, however. Crittenden has a list of people who have accepted the challenge and say they plan to bury the hatchet. And he'd like to bring it to youth, possibly as part of the Black Male Achievement initiative, which is currently underway in Portland. Portland is one of 11 cities, which received support from The National League of Cities to focus on improving life prospects for Black men and boys.

Mayor Hales has supported the initiative through earmarking city internships for Black boys, and assigning staffer Chad Stover to bring together a group of Black youth and adults to work on the issues.

Joe McFerrin, president of Portland Opportunities Industrialization Center, said disparities in educational and life outcomes can be eliminated if everyone works together toward that goal.

"My hope is that through the Black Male Achievement initiative we can bring light to some of the disparities in employment, education and the justice system, so we can bring a community-wide focus across all of our systems and make changes that are sustainable."