Dawson Park Reopens With a Concert from Ocean 503 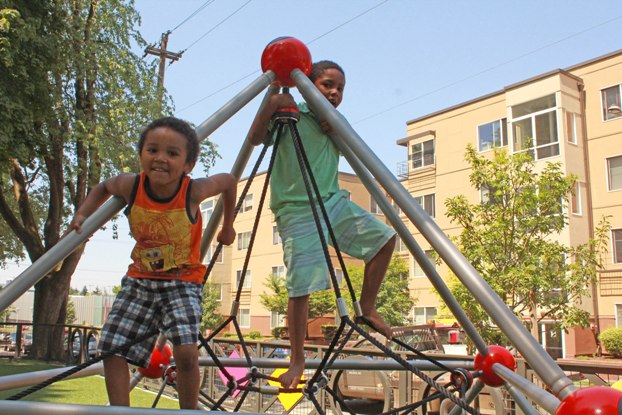 PHOTO: Boys have fun on a climbing structure in Dawson Park's new playground

Dawson Park, a longtime gathering place that was central to Portland's African American community, has reopened after a $2.7 million makeover.

The park has kept its signature gazebo, crowned with a dome that used to grace a pharmacy on Williams Avenue, when that street was the center of a thriving African American neighborhood.

Angela Taylor, who works at Legacy Emanuel Medical Center and has family nearby, said she loves the redesign.

"I like that they have kept the dome, because it symbolizes where this park came from," she says. "They have always had concerts here."

The new park design is open plan with entrances at all four corners leading into a circular walkway around a central lawn. The park has a shelter, picnic tables, a barbecue, a children's playground with some of the bounciest artificial turf you've ever walked on, and  a splash pad play fountain where visitors can cool off  in the refreshing mist. Artist Isaka Shamsud-Din is making decorative medallions inspired by African Ndebele patterns that will be added at a later date.

The fountain, funded by a grant from Legacy Emanuel  is surrounded by smooth oval boulders of granite inscribed with the story of the park.

" What's really cool about the fountain is it tells a story of what's really cool about this place in the neighborhood and how significant this place has been as the neighborhood has developed over the years," said Parks director Mike Abbate. "This is a place that's been very important going back into the 1920s. In the 1940s this was seen as a major community gathering place.  So what we're looking at here is a major renovation of an incredibly historic park."

Joe Nunn, a longtime community resident whose words contribute to the story etched into the boulders, said the park always was a popular gathering place after church. 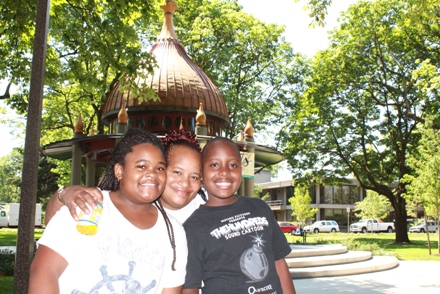 The City of Portland, Legacy Emanuel Medical Center, the Regional Arts and Culture Council collaborated with community members to create the project. Quinton said the renovation used one of the most diverse crews in the commission's history.

"We were able to achieve an 89 percent utilization rate of minority women and small contractors -- almost unprecedented in terms of public construction projects," he said. "This is a model that we believe we can use in other community projects and it's a model that we are committed to continuing to use."

Creating the circular walkway was one of the biggest challenges for project managers. Workers had to dig trenches around tree roots by hand, to safeguard the park's 40-plus trees. Before the renovation bushes and dark corners made pedestrians think twice before entering after sunset. Now the open vista and bright energy-efficient lighting means parents can see their children from across the park. That's a big safety improvement, Taylor said.

"It wasn't very kid friendly. One thing I worried about when they opened this park back up is if we were going to see people hanging out drinking or doing negative things. But I haven't seen it at all."

The history of Portland's African American community is integral to the park's story. This part of Northeast Portland, the Albina neighborhood, was in the heart of that community. The neighborhood was also called Jumptown because of its jazz clubs and vibrant nightlife. And because of a banking  practice known as redlining, Black Portlanders could buy a home here although they could not get loans to buy anywhere else in the city.

But in the 1950s more than 400 homes on the East bank of the Willamette River were demolished to make way for Memorial Coliseum.  And in the 1960s more than 1000 homes and businesses went away to make way for the I5 freeway and the expansion of  Emanuel Medical Center. The impact on Portland's small and vulnerable African American community is hard to overstate.

Displacement, research suggests, creates a characteristic pattern of family and economic breakdown similar to that seen in refugee groups across the world. When crack was introduced to this community in the 1980s the problems grew. Tragically, more displacement was to follow in the next decades as the neighborhood gentrified and communities of color were pushed east.

Today the city has adopted different development policies, designed to support small businesses and help low-income communities thrive in place. Dawson Park is designed to honor the past as well as continue to be a center for cultural exchange.

Donny Adair, another longtime resident who worked on the project says the parks new design will help in healing the neighborhood.

"It means a lot to me have this park reconditioned," Adair says. "We grew up in it and it was a great place to come to have a great time, stay off the streets stay out of trouble and develop a lot of skills, camaraderie, communication skills, those kinds of things...It's a great neighborhood park. I had a great time growing up here and I just want many more kids to have that experience."

Check out all the concerts in the park here

Check out Portland Parks Movies in the Park

Check out places to find free lunch for children