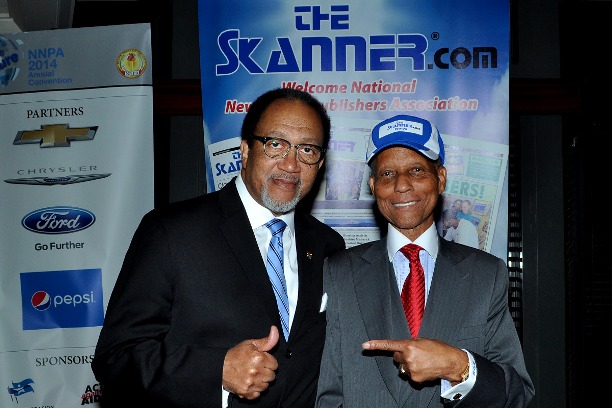 In addition, The Skanner News’ website won second place in the A. Philip Randolph Messenger Award for Digital Excellence competition. The website, www.theskanner.com, was launched late last fall, with many expanded features and responsive design.

The Skanner News has won more NNPA awards in the last 10 years than all the other Black publications in Arizona, California, Nevada, Oregon and Washington combined.

And The Skanner News won third place in Community Service, for an investigative project by News Editor Lisa Loving that evaluated the effectiveness of Cover Oregon navigators. It was the second Community Service honor won by The Skanner in the area of public health; the paper won first place in 2012 for building a Google map of healthy corner grocery stores throughout the Portland metro area.

This year’s NNPA convention marks the first time the national gathering has been held in Portland. The Skanner News and the Portland Observer together hosted the event.

“We had guests from all over the country–and everybody really loved Portland,” said The Skanner News publisher Bernie Foster. “but we really appreciated our local support.

“U.S. Sen. Jeff Merkley, Portland Development Commission CEO Patrick Quinton, Portland Mayor Charlie Hales, and a squad of volunteers all made our guests feel welcome and we appreciate that."

Also at the convention, Foster announced that newly elected NNPA CEO Ben Chavis will be the keynote speaker at The Skanner News Martin Luther King Jr. Breakfast in 2015.

Chavis was the leader of the Wilmington Ten, a group of civil rights activists wrongfully incarcerated for allegedly firebombing a grocery store; the court case against them was so controversial it made headlines all over the world. Their convictions were eventually overturned by a federal appeals court but not until they had served 10 years in prison.

In 2012, Chavis and the six surviving members of the group for pardoned by North Carolina Gov. Beverly Perdue.

The convention kicked off Wednesday night with a gathering to honor Portlanders who have contributed to making Oregon a more equitable and just place. Honored at the event were:

The NNPA merit awards were held Thursday night at the Nines Hotel.

With the honor goes the title of Best Black Newspaper in the nation. The St. Louis American, published by Dr. Donald M. Suggs, captured six first-place awards for Best Use of Photographs (Broadsheet), Best Special Section, Best Entertainment Section, Best Lifestyle Section Community Service and Digital Excellence. The newspaper came in second in Best Layout and Design (Broadsheet) as well as Best Business Section and third place in the Best Sports Section competition. Rosetta Miller Perry, publisher of the Tennessee Tribune in Nashville, was named Publisher of the Year by her fellow publishers.The Merit Awards are administered by the NNPA Foundation, the charitable arm of the Association.

“We had more newspapers winning awards this year than at any time in recent memory,” said Mary Denson, chair of the NNPA Foundation and publisher of the Windy City Word in Chicago.

“I think that’s a testament to the dramatic improvement our papers continue to make.”

Cloves C. Campbell, chairman of the NNPA and publisher of the Arizona Informant, said,

“As usual, the competition was extremely fierce this year and we congratulate all of the winners. This year’s Merit Awards winners have raised the bar of excellence that all of our papers can strive to meet.”