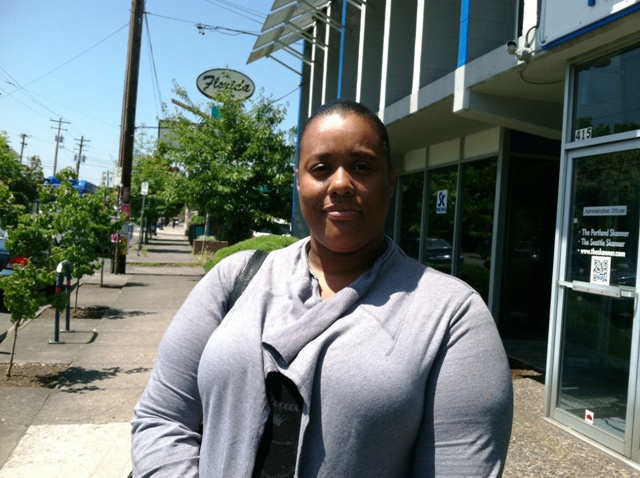 After Erica Battles' car was stolen last year, she filed a police report that same night but heard nothing back from the authorities.

Now her red Dodge Magnum SXT is sitting at a used car lot on McLoughlin Boulevard waiting to be sold – and even though Battles has the title, the key to the ignition and proof of insurance, she’s been told that she’ll be arrested if she tries to drive her own vehicle off the lot.

Her pro bono attorney, Michael Fuller of OlsenDaines law firm, served a civil lawsuit claim notice against the City of Portland this week claiming the Police Bureau “failed to equally protect Ms. Battles as a crime victim, and violated her rights by failing to inform her when they located her car.”

“How am I the legal owner of the vehicle, that shows up in the DMV, but I have no access to it?” Battles says. “I asked them if I could take my key and go get my own car, but they said you could get arrested. Yes I could get arrested for taking my own car from the lot.”

Battles says the car was stolen from her boyfriend by his cousin, Shannvonday Valerie Holmes. The two were out when the boyfriend left the keys in the ignition of the vehicle, went into a business and came out to find the car gone. It was apparently found dumped at the side of a road a week later.

But instead of notifying Battles that the car had been found, the police apparently let Sergeants Towing take it to their impound lot and begin the process of assuming ownership of it.

In an interview with KOIN television, Sergeants Towing owner Steve Preston says the certified letter to Battles informing her that he had the Dodge came back because, he said, Battles’ address was not current with the Department of Motor Vehicles.

Battles flatly denies that, insisting she hasn’t changed her address recently – and in fact the address is accurate on copies of the registration paperwork left in the vehicle as well as the police report, obtained by The Skanner News.

Police spokesman Pete Simpson told a KOIN television reporter last week that Battles was not informed when her car was recovered because, Simpson said, “We wouldn’t notify her unless it was listed as stolen.”

The news report implied that because her boyfriend is related to the car thief, it wasn’t really stolen.

Holmes, who is named as the car thief in the police report (incorrectly, as Shavonday Holmes), in April was arrested with three others as part of a retail theft ring that stole more than $2,000 worth of goods from the Jantzen Beach TJ Maxx store as well as Ann Taylor in Lloyd Center.

It remains unclear how or why the Police Bureau stopped considering the theft as a theft.

Battles says she worked hard to buy her car and kept it in excellent condition – which is why she kept trying to locate it even though the authorities never let her know they’d found it.

“I have a job, I worked hard to save the money for that car – and I own it,” she says. “When it went missing it was a real hardship – getting to work, having to find alternative transportation, and all of that during the holiday season when the weather was so bad.

“And then having to start saving up for another car – just to realize they all knew where my car was since the week after I reported it,” she says.

Over the past six months, Battles says she checked in with towing companies to see if they had the vehicle, but none did. It wasn’t until a friend suggested she call the DMV two weeks ago that she was told that she is still the registered owner and the car was sitting on a used car lot.

“So I understand I could be arrested for stealing my own vehicle that I am the registered owner of? I did not drop the ball,” she says. “But why is no one taking ownership such as the Police Department and saying we messed up somewhere, let's make this right?”

“What the public needs to know is, if it happened to me, it could definitely happen to you,” she says. “And it's probably happened to other people.”

“This is not a lawsuit that needs to be filed – they just need to do the right thing,” Fuller said this week.

“And I think they will.”