Heroin Deaths Rise in Pacific Northwest and Across USA 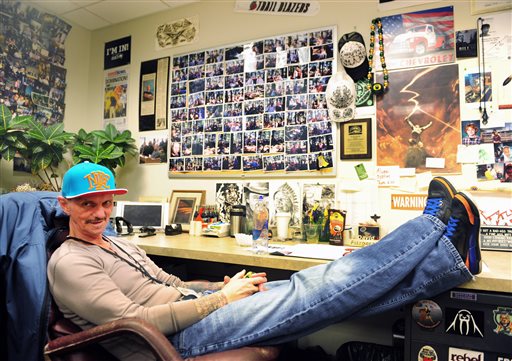 Former heroin addict David Fitzgerald sits in his office in Portland, Ore. The photos on the wall include a collage from the previous year's group picnic. Recovering addicts smile and hold plates of food. Seven months later, Fitzgerald looks over the faces. Are they all still sober? Are they all still alive? "Most of them," he says. "Not all."

In and around Cleveland, heroin-related overdoses killed 195 people last year, shattering the previous record. Some Ohio police chiefs say heroin is easier for kids to get than beer. In Missouri, admissions to treatment programs for heroin addiction rose 700 percent in the past two decades. In Massachusetts, state police say at least 185 people have died from suspected heroin overdoses in the state since Nov. 1, and the governor has declared a public health emergency.

With heroin use rising across the U.S., The Associated Press queried state health departments, medical examiner's offices and law enforcement agencies across the nation for statistics related to use, overdoses and treatment to obtain a more detailed picture of the problem on the ground. While some states reported few changes, others pointed to heroin as a significant public health concern. A look at some state-specific findings:

— CONNECTICUT: The state reports 10,183 people admitted for treatment for heroin last year at licensed programs, up from 8,954 in 2012 and the highest total in eight years. Heroin-related overdose deaths went from 174 in 2012 to 257 last year, a 48 percent increase. The figures include heroin alone and heroin with other drugs.

— FLORIDA: The number of heroin-related deaths statewide nearly doubled between 2011 and 2012, from 57 to 108, with an increase from 15 to 33 deaths in the Miami area. Admissions for drug treatment where heroin was the primary drug rose from 4 percent of all substance abuse admissions around Miami in 2012 to 8 percent in the first half of 2013.

— ILLINOIS: Heroin's impact is felt from the suburbs of Chicago to those near St. Louis. In DuPage County, the number of heroin deaths stayed in the 20s each year from 2007 through 2011, then rose to 43 in 2012 and 46 last year. Last year's youngest victim was 15 years old. Madison County, northeast of St. Louis, tallied 23 heroin deaths last year, more than two-thirds greater than the seven in 2009.

— INDIANA: Heroin use reported by addicts getting treatment rose from 2.6 percent in 2001 to 6.6 percent in 2010, the most recent year for which statistics were available.

— MASSACHUSETTS: In March, Gov. Deval Patrick declared a public health emergency in response to heroin overdoses and opioid addiction. State police say at least 185 people have died from suspected heroin overdoses in the state since Nov. 1, a figure that does not even include overdose deaths in the state's three largest cities. The number of people dying from opiate overdose, which could include heroin but also painkillers such as oxycodone, has nearly doubled from 2000, with 642 deaths reported for 2011.

— NEW HAMPSHIRE: In 2013, 68 people died of heroin-related overdoses, compared with 38 the previous year and 16 in 2008. Also rising are burglaries, robberies and assaults associated with drug-seeking. State police say 13 percent of traffic stops and arrests that led to blood or urine tests in 2013 involved heroin.

— NEW JERSEY: State officials are seeing a jump in those seeking treatment who live in suburban areas versus cities. Overall, the number of people seeking treatment for heroin abuse hit a five-year high of 25,442 in 2012, the latest year for which statistics were available. In 2012, 591 people died of heroin overdoses statewide, up from 443 the previous year.

— NEW YORK: Heroin and prescription painkiller investigations have doubled in Rockland County northwest of Manhattan, where a bag of heroin can cost as little as $5 and the drug is being abused by people of all ages and income levels. Treatment facilities also report a rise in numbers: Five years ago, the Long Island Council on Alcoholism and Drug Dependence was serving just under 100 families a month. Last month, the council helped more than 850 families; 80 percent of that increase was due to opiate and heroin addiction.

— NORTH DAKOTA: The number of federal charges related to heroin, but also other drugs, has soared in the past few years, coinciding with the explosion of development in the state's oil patch.

— OHIO: The number of heroin-related overdose deaths went to 426 in 2011, up from 338 the previous year, part of a trend that police and counseling agencies have been warning about for several years. In 2004, 5.8 percent of Ohio drug users named heroin as their drug of choice; that rose to 12.5 percent in 2011.

— OREGON: Heroin overdose deaths in the state have grown from a couple of dozen a year beginning in 2000 to an average of more than 100 a year for the past five years.

— TEXAS: Heroin deaths increased from 111 in 1999 to 364 in 2011, the last year for which statistics were available, with the biggest jumps among whites and Hispanics.

— VERMONT: Heroin deaths jumped to 21 in 2013 in Vermont, up from single digits over the previous decade. Treatment for heroin or painkiller abuse rose from 399 people in 2000 to 3,479 in 2012, a per capita rate now second in the nation. This year the governor dedicated his entire State of the State speech to the heroin problem.

— WASHINGTON: Overdose deaths specifically attributable to heroin have risen in the past two decades, from 16 in 1995 to 182 in 2012, with the increase in heroin driven by young adults outside the Seattle area.

— WEST VIRGINIA: West Virginia has seen an increase in overdose deaths over the past few years where heroin was either the primary drug or one in a combination. Seventy people died of heroin-related overdoses in 2012, according to preliminary data, compared with 22 in 2007.