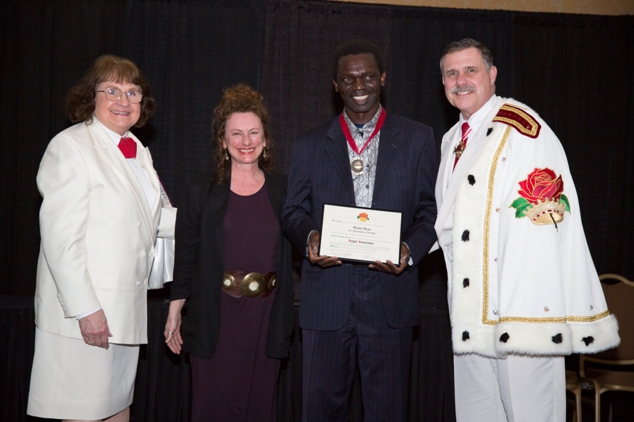 The Skanner News has named Djimet Dogo, director of Africa House, our Newsmaker of the Year. Dogo was chosen for his dedication to supporting African immigrants and refugees.

The Royal Rosarians' Newsmaker of the Year Banquet, held March 12, 2014 at the Doubletree Hotel, honored Portlanders who have shown exceptional heroism or dedication to humanitarian work. Seven news organizations took part in the ceremony.

Dogo certainly meets those requirements. At Africa House, funded through the Immigrant and Refugee Community Organization, he helps many families who come from war zones -- some of them after years in refugee camps. And Dogo goes above and beyond to  support his families. Last March, we reported on a family of six orphans who struggled to stay together after the death of their mother, Aisha Mwinja. The first person they called? Djimet Dogo.

One year later, with help from Dogo and a community that rallied around to help, the family is doing well. Eldest son Husein is a freshman at the University of Oregon. He comes home every weekend to look after his younger brothers and sisters. Eldest sister Amida is a student at Portland State University. That’s in addition to cooking and caring for her younger siblings.

The other children too are doing well in school, playing sports and pulling together.  Read the orginal story.

Dogo also was a key player in other stories important to Portland’s African Immigrant and Refugee community.

He helped the Communities of Color Coalition pull together a landmark report showing high poverty rates and poor job prospects in his community – despite the fact that African immigrants and refugees often have superior educational qualifications.

He advocated with the city to fund outreach workers to prevent vulnerable Black youth from being pulled into gangs, crime and violence.  He created mentoring and drop-in education programs at Africa House to help young people succeed in school. And families know if they are in trouble, Dogo will do what he can to help.

The other Newsmakers of the Year for 2013 were:

KUIK Radio AM 1360: Steve Chapman, a firefighter, saved the life of a referee at his son’s basketball game, by giving lifesaving heart compressions and breathing support until EMTs arrived.

KPTV Channel  12: Charlie Barrett, a tow truck driver  was securing a car when he heard a faint cry for help. Barrett searched until he found a severely injured teen, then called paramedics.

KOIN Channel 6 Justin Carey is the teen who was found lying in bushes by the tow truck driver. He’d been hit while waiting for his school bus. Today, despite losing part of his leg, Justin is moving forward with a positive outlook.