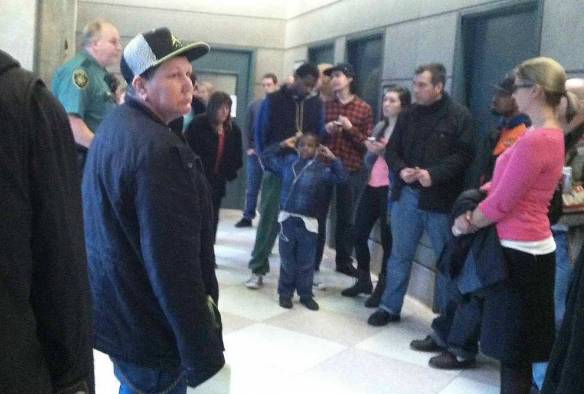 1 p.m.: About 40 people are lined up outside courtroom JC1. “Anyone for TriMet?” asks a woman in a pink sweater, who is shepherding new arrivals into line. Welcome to “TriMet Tuesday,” the community court for people caught traveling on TriMet without valid tickets.

1:05 p.m.: Court doors open. A green-clad deputy explains no standing is allowed. Once the seats are filled the overflow crowd will have to wait outside. About 30 people grab seats. Most of the offenders are young, in their late teens and 20s. Judging from appearance, they are also among the city’s poorest.

1:10 p.m.: Social Services liaison Diana Arling, who has decades of experience as a mental health evaluator,  explains this court is for people who want to serve eight hours of community service instead of paying a fine. She briefly states the three choices facing people caught without valid tickets.

You can plead not guilty and get a date in court.

You can plead no contest, complete eight hours of community service and have the ticket dismissed. Later it’s possible to have it expunged.  But if you fail to complete the hours, the misdemeanor, “Theft of Service” goes on your record and you can’t get it expunged.

And even though it's a $2.50 ticket misdemeanour, it can be a barrier to getting work.

People with mental health or drug problems can meet with Arling. She can recommend eight hours of treatment or AA meetings as an alternative to community service.

If your ticket is expired, or if you left your honored citizen pass at home, the result is the same, she says.  You didn’t have a valid ticket to ride.

“There’s no attorney because this is a violation and not a crime,” Arling says.

A Spanish interpreter asks if anyone needs help. He has one taker.

1:25 p.m.: A court clerk commands everyone to rise as the Honorable Steven Todd, community court judge, enters the courtroom. Judge Todd smiles warmly at everyone in the room as he comes to the front of the seated area and goes over the rules in more detail.

“You’re all innocent till proved guilty,” he says, and explains the options again.

“The good news is that there is no risk of jail no matter what. The bad news is that because it’s a violation you have fewer rights. The standard of proof is a preponderance of the evidence, not beyond a reasonable doubt. That’s 51 percent compared to 99 percent.”

1:30 p.m.: The clerk calls out the first case: a young woman, Mary B. There’s an error in the spelling of her name that takes a few minutes to sort out. Then the judge asks her how she wants to plead and she says, ‘no contest.’ Judge Todd orders eight hours of community service.

Mary B. signs up with Nnenna Lewis, court coordinator for the Portland Business Alliance. It’s Lewis’s job to dole out the community service work, mostly landscaping and trash pick-up.

1:34 p.m.: A succession of people is called up, plead and get in line to be assigned eight hours of service. Then lawyers step in to deal with a non-TriMet case.

“Flynn,” a bald and bearded 30-something, is charged with being at S.E. 97th and Stark with the intention of “paying for sexual activity.”

It’s his first offense so he is sentenced to attend what Judge Todd calls a “very expensive” ($1,000) “John class” and to “stay out of trouble for six months.”

1:40 p.m.: Back to the ticketless TriMet riders. In quick succession they plead "no contest" and are sentenced to community service. A few ask for the treatment option. An older man is charged with smoking on the platform. Community service for him too.

Occasionally the ticket notes the person was cooperative with the TriMet fare inspectors. The judge praises good behavior.  Apparently Savannah I. wasn’t so polite.

“You don’t want to tell me what you told the officer?” the judge asks. She shakes her head, blushing and lines up for community service.

Chris F., one of the few men here dressed in a suit and tie, is on parole. Politely he recounts that he had a ticket, but jumped on the train before validating it. He’s in a treatment program now and names his parole officer -- Dave O.

“Oh good.  I know him, he’s great,” Judge Todd says. “Parole officers get a bad rap but they can be your best friend if you let them.”

2 p.m.: The TriMet cases keep coming.  A slight woman, who looks about 16, is ordered to attend eight Narcotics Anonymous meetings. “You need to go to at least one a week, and you should be going a lot more often than that if you want it to work,” she’s told. “Bring back proof.”

Another young woman totters up in pink high-platform shoes and a bare midriff despite the chilly weather. Around her neck she wears a necklace spelling DOPE in large, gold letters. Eight hours for her too.

2:30 p.m.: Two lawyers step in again to deal with a few misdemeanors. The charges are not read out, but you can guess what they are from the judge’s instructions. “Stay out of Safeway.  Stay out of Macy’s. Stay out of Fred Meyer’s. Stay out of Target. Stay away from the Portland State campus.”

2:45 p.m.: Jennifer C. is called up. In her 40s, she wears a jacket over a short skirt and boots. It’s a fairly conservative outfit, but her make-up – vivid red cheeks and heavy blue eye shadow – is the opposite.

“You’ve missed too many court dates and you’ve spent too much time in jail,” the judge tells her. “You have way too many tickets on TriMet. I don’t think you are supposed to be on TriMet. If you go on the train again you’d better make sure it is legal.”

She pleads ‘not guilty’ and gets a court date. Interested in what’s behind all these tickets, I follow her out of the court. But all she wants to do is get away as fast as she can.

2:50 p.m.: One man is sent to treatment through Transition Projects. Another, facing two shoplifting charges, is ordered to attend 90 NA meetings in 90 days. He tried to steal a present for his girlfriend two days before Christmas, he tells the judge.

“I’m sure she’d be happier if you went to meetings and got healthier and happier,” the judge says.

“You’ve got to go at least once a day. And you might be wise to go twice a day on weekends in case you get sick or something goes wrong. If you follow through it will be a wonderful thing and everyone will congratulate you. We’ll dismiss both cases. But if you don’t, you’ll spend five days in jail and be fined 250 bucks.”

3:00 p.m.: A homeless man is charged with trespassing. It’s an abandoned building, he tells the judge.

“Not completely abandoned. They’re watching it,” the judge counters.

His attorney pleads “not guilty” as he says “I’m guilty.”

“Stop!” the lawyer says good humoredly. “Stop! I’m trying to defend you, and you’re ruining it.”

A 20-something woman has come all the way from Lincoln City to give proof of attending treatment.

“Successful,” Diana Arling tells the judge.  “Oh my God,” the woman mouths as she leaves the court, but she’s smiling not angry.

“You haven’t got your skateboard back?”   a deputy asks Nathaniel M.,  who’s wearing a sleeveless jean jacket with a skull on the back. He bumps his shin getting on a bench as he goes before the judge. Nathaniel has three cases, and the judge appears wary as he looks them up on his computer.

Told he has to deal with two of the cases in Gresham, he limps out of court looking agitated and muttering to himself. Later the deputy tells me he had been caught on CCTV that morning trying to break in to Troutdale police station to reclaim his confiscated skateboard.

“Tweaking,” is the deputy’s verdict.

3:00 p.m.:  As the court empties out some people remain whose names are not on the list. A tall man with hair to his waist and wearing an Ohio State sweatshirt is given a court date.  A bearded 20-something who looks better cared for than most here, has a ticket for driving with an out-of-state license.

“An old-fashioned traffic ticket,” the judge says cheerfully. “Mostly the officers just want you to put it right.”

He gets two months to prove he has an Oregon license.

Another young man with blond hair and the ruddy complexion that means homelessness, alcoholism or both, has arrived a day early. He’s told to come back tomorrow.

A man in his 50s is charged with having an open container of alcohol in a public place.  “You understand the rule? You have to be inside a building,” the judge says, ordering him to eight hours of community service.

Finally the cases are finished. Now the judge will issue warrants for the no-shows. Arling, the social services liaison, has a sheaf of paperwork to complete.

About 15 of the nearly 50 people seen in community court this afternoon requested treatment instead of community service.  Most have to prove they attended Alcoholics Anonymous or Narcotics Anonymous meetings.

“They have to do at least eight hours, just the same as the community service hours,” Arling says. “It’s no easier.”

Last year a total of 1,079 people went to treatment with 53 percent of them completing the requirements successfully. According to court statistics, the program saved 1,230 jail days, and a total of $216,480.

But the program is completely voluntary and not everyone with mental illness or addiction chooses treatment.  Arling saw three women in court whom she believes suffer from schizophrenia. They chose community service, not treatment.

When it comes to drugs, meth and alcohol addiction are still most common, Arling says. But she’s also seeing a resurgence in heroin addiction. Lately, she’s seen clients pass out from overdosing.

“They sprain an ankle and get put on oxycodone,” she says. “When it runs out, if their ankle still hurts or if they just like the oxy, they sometimes go straight to heroin. It’s cheaper.”

To help people find food, medical clinics, drug treatment, housing and other kinds of help, Arling hands out dozens of Street Roots resource guides.  More than 40 percent of the people she deals with are homeless, she says.

This week Portland Police Bureau rolled out a new effort to police downtown and clamp down on nuisance crimes such as public drinking, trespassing and  public urination. And seven new officers will focus on 10 designated “hot-spots” – high poverty, high crime areas, which also happen to be the neighborhoods where higher numbers of Black and Latino families live.

As a result, community court staffers are expecting to see a jump in the number of cases they see.

So, does our justice system criminalize poverty?

Arling won’t give an opinion on that, but she admits that people with money and homes to go to, don't run much risk of getting charges for sleeping outdoors, public urination or drinking in public.

However, she says, helping people into treatment can be satisfying.

Take the woman who came all the way from Lincoln City to prove she had succeeded, and was doing well.

“I would have bet anything she wouldn’t have turned up,” she says. “But there she is, clean and sober, living with her family at the beach, and doing well.”