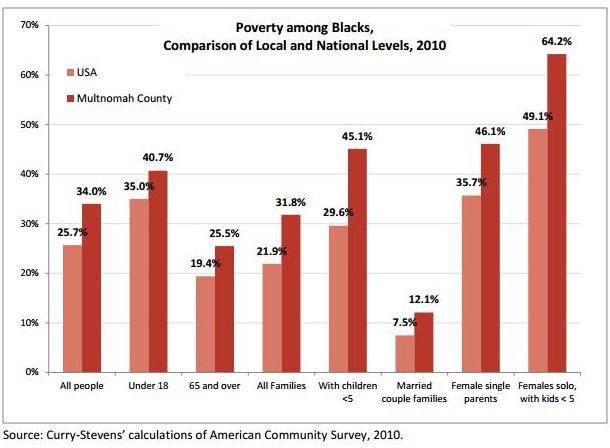 It’s no secret that Portland’s African American community suffers from high rates of poverty and unemployment. Wealth and income gaps persist along with and racial disparities in just about every measure of wellbeing.

Yet even if the figures are not new, when looked at as a whole they paint a harsh picture of the African American experience in Multnomah County. So the latest Communities of Color report, released last week by the Portland African American Leadership Forum, amounts to a powerful wake-up call for leaders and citizens alike.

“I think there are plenty of people who will read the report and will think that either things have changed or somewhat gotten better,” said Cyreena Boston, director of Portland African American Leadership Forum.  “And they will probably be a bit shocked – and I hope dissatisfied—by the fact that they’ve even gotten worse or stayed exactly the same.”

Poverty rates for Black people are worse in MultnomahCounty than they are nationally.

More than 40 in every 100 African American children in live in poverty compared to 15 of every 100 White children.

Fewer than one-third of African-American households own their homes, compared to about 60 percent of White households in MultnomahCounty.

A White youth found guilty stands a one-in-ten chance of being held in custody, while a Black youth faces a one-in-four chance.

Michael Alexander, president of the Urban League of Portland, said bringing all the statistics together shows how different institutions work together to form a system that creates and reinforces inequality.

“It’s not good news but it’s never going to get better unless we begin to track and monitor,” Alexander says.

“We begin to see a pattern across multiple indicators in the adverse exposure that young African Americans have to many of the systems that are charged with education, criminal justice, child welfare,” he says.  “We have higher levels of African American children in foster care, lower placement in families… It just speaks to not just the neglect, but the lack of focus in finding ways to appropriately and constructively engage this group.

“I think it’s also a very valid reminder to policy makers and elected officials foundations and those who are funding work around those measures and social justice issues to understand how much work still needs to be done.”

Boston said that on the state level, Gov. Kitzhaber has shown leadership by forming the Public Safety Commission.  The governor has shown he understands how high levels of young black men in the criminal justice system are linked to under-spending on education and safety net programs, she says.

“I think there is a connection between how we are under-educating young black boys and how they get caught up in the school to prison pipeline.”

Portland State University assistant professor Lisa Bates, who wrote the report, said experts from the community weighed in to develop policies that have been shown to work.

“There has been some really clear thinking around how to really activate a community benefits agreement to address gentrification issues, public contracting issues, subsidized development issues, for example,” she said. “A lot of thought has gone into the education section and trying to clarify the issues facing Black young people in school.”

Advocates hope that community members will attend the Jan. 21 presentation, to hear from experts who contributed to the report and to demand action from policymakers and elected officials.

“I think the report sends a clear message that despite the fact that we have governments which have taken on equity as a part of their political makeup, and the way their government operates, there are still plenty of things that need to be addressed by way of the African American community,” Boston says.

“To simply have offices of equity and equity lenses is just not enough. I think the report creates a compelling argument that governments and other powerful agencies need to be very specific in terms of responding to these specific policy recommendations in the report.”