Students Get a Standing Ovation at POIC Work Opportunities Breakfast

Portland Opportunities Industrial Center drew a crowd of supporters to Portland's MAC club April 5, for its annual Work Connections Breakfast.  It was an opportunity for the high school and career mentoring nonprofit to showcase its work.

The Emcee for the event was former NBA point guard and coach Michael Holton. Holton said he had learned about the school and its innovative programs through his friendship with Joe McFerrin, POIC's President and CEO.

"When he started explaining to me his passion for creating opportunities for youth I knew I wanted to be part of that," Holton said. When Holton was in third grade, his parents divorced, he remembered. His mother told him she was happy because the judge had "awarded" him to her. While he didn't know what that meant, the very next day he approached two business owners and asked for work.

"If my dad was not going to be there I thought I should have a job," he said.  Those business owners,  Ms. Johnson and Mr. Friday, gave him small tasks, a little spare change, and a huge dose of encouragement.

Multnomah County Chair, Jeff Cogen, said POIC has helped more than 800 youth through the Rosemary Anderson High School,  college prep and mentoring programs. Many of those students have dropped out of school by the time they reach POIC, and all of them have an uphill climb to graduate.  POIC helps its students through the age of 25.

"POIC doesn't give up on any of our young men and women," Cogen said. "POIC helps hundreds of our community's children on a daily basis."

More than 90 percent of students at the school are from low-income families and get free or reduced school meals.

Joe McFerrin, CEO and president of the nonprofit, said the students are talented and have a wide range of interests. What they don't have are the extended family and friends connections that can help them launch careers.

"Eighty percent of jobs are not advertised," he said. "Businesses are relying more and more on their workforce connections when they hire.

"A kid with parents who are working poor, with no extended family connections has no place to start, and no chance. At POIC we are that extended family network. We're the life skills coaches, the mentors; we're the ones who pick them up when they fall." 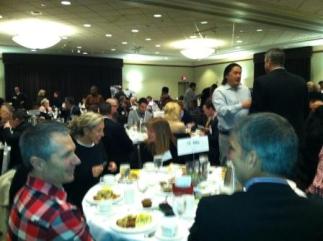 Janine Clayton of the Gifford Pinchot National Forest was recognized with a CARE Advocate award, for hiring and mentoring students.  Receiving the award on behalf of her staff, Clayton said I was a privilege to be involved with POIC and quoted Dr. Martin Luther King Jr. "Life's most persistent and urgent question is 'What are you doing for others?'"

Mayor Sam Adams also was recognized with a CARE Advocate award. Adams explained he cares a lot about youth who drop out of education because his own mother once was a pregnant 15-year-old who dropped out of school. She had four more children and struggled, both financially and to get an education. She finally succeeded in earning a master's degree in architecture.

"We don't get to choose the family or the circumstances into which we are born," he said. "That's a fact that is so obvious we sometimes forget  it." Adams accepted for the city and county team who work with POIC, and urged business leaders to continue supporting these efforts.

Two students received CARE Role Model awards and both were given standing ovations by a crowd that clearly appreciated how hard they had worked to surmount their challenges.

Lakeisha Holloway described being homeless during her freshman year in high school and explained that her mother had lost hope after struggling many years to earn a living with only an 8th Grade education. More and more she had turned to alcohol, leaving Lakeisha to fend for herself. Yet with the help of POIC, Holloway is a graduate pursuing a career in the forest service.

"I would like to thank the Forest Service for sending me an application and taking a chance on me," she said. "And I'd like to thank POIC for the love and support and for being more than a program, for being a blessing."

Keontay Pitts also was recognized as a CARE role model. After missing a whole year of school when he got into trouble with the law as a 15-year-old, Pitts found a new beginning at POIC. Now, he gets up at 5 a.m. works out, studies, and is training as a chef. Did we mention he's also running his own food cart business, Grassroots, on N.E. Fremont Street.

"I was the first in my immediate family to graduate from high school," Pitts said. "Rosemary Anderson is a place to build trust. When I struggled to keep coming to school they would push me and push me. Today I am an entrepreneur with my own food cart. And I have plans to open my own restaurant."