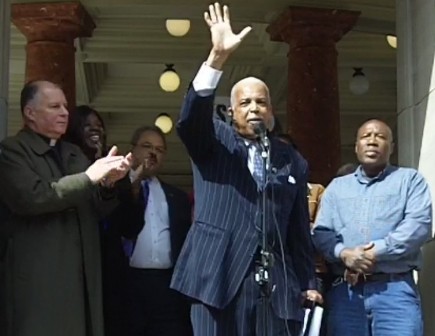 As predicted by many, including the Skanner News, former Portland Police Officer Ron Frashour – who fatally shot in the back an unarmed man having a mental health crisis in 2010 -- has been reinstated to his job by a state arbitrator.

A small but lively crowd of under 200 people marched and rallied outside City Hall today, as Mayor Sam Adams told reporters inside that he and his staff are looking at ways they can appeal the state labor relations officials' decision.

Adams, who took over the job of police commissioner and fired former Chief Rosie Sizer months after Campbell's killing in 2010, made no question about his commitment to trying to overturn the arbitrator's ruling – however it remains clear that may not be possible.

"Frashour remains on 'terminated status' with the Portland Police Bureau and he will remain that way until we figure out a means of asking for a second opinion from the State Employment Relations Board which has jurisdiction over this matter," Adams said Monday afternoon.

Asked if he was surprised by the ruling, Adams did not answer directly.

"You know as an actual decision maker in this process I believe that our investigation was very thorough and the discipline that we pursued and enacted was the fair discipline based on the merits of the case," he said.

"Again, we didn't find evidence of malice in Mr. Frashour's actions and judgments but we did find that he acted outside of police protocols -- and part of the protocols include making good decisions."

Adams strongly stated that he is committed to making positive changes within the department – and that Chief Mike Reese is too.

"I think the track record with his tenure as chief and my tenure as police commissioner shows a real strong effort to continuously improve this police bureau," he said.

Adams encouraged members of the public to schedule 'ride-alongs' with officers.

"You'll find that the Portland Police Bureau is full of compassionate public servants," he said. "With a group of employees that numbers close to 1,000 you're going to have issues like this happen, and when they do happen, especially when the Police Bureau has that sacred authority and responsibility for use of force – I believe that standing up for our principals for appropriate use of force are worth fighting for."

The mayor said that only a "narrow" window of opportunity exists for an appeal.

"It's unusual for the city to do that and we're studying what exactly our opportunities are in that regard," he said. "Today I don't have an answer for you but we will in a matter of days."

Meanwhile, outdoors in the warm spring sunshine, it appeared that a strong group of Occupy Portland protestors lent its strength to the mixed-race crowd, with bullhorns, signs and car horns honking in support.

Dr. LeRoy Haynes of the Albina Ministerial Alliance Coalition kicked off the rally with slogans linking the police killing of Campbell with the recent death of Trayvon Martin in Florida.

"The Albina Ministerial Alliance Coalition for Justice and Police Reform has come today to say in unison, that the decision by the state arbitrator to return Officer Frashour back to duty as a Portland Police officer after killing Aaron Campbell, unarmed, in compliance, under mental stress, with a sniper's rifle in the back – sends a message to the community that no police officer that shoots an unarmed citizen will be held accountable by the judicial and criminal justice and the arbitrator's system," Haynes said.

"This decision is outrageous as Trayvon Martin being shot down by a neighborhood vigilante – holding skittles in one hand and tea in the other hand.

"There is no way a justice system, an arbitration that promotes itself to be fair just and unbiased could render such a decision," he said.

"It means that every mother calling 911 in case of their son or daughter having a mental problem that they have to say at the end of the call, 'Don't kill my son. Don't kill my daughter.'"

"Some friends of mine always say, 'why don't we have more local black and minority folks join the Portland Police force?'

"At the same time I have black officers pulling me aside as I'm walking down the street and Asian officers stopping me in the grocery store, telling me that they know that the white officers and the supervisors expect them to be more aggressive with the minority neighbors than they are, just to prove that they aren't weak.

"I have to go back to a13 year old, who came to me – he had always wanted to be a police officer as a young black kid. He came to me right after the Aaron Campbell shooting and said, you always told me if there was a problem I should talk with the police, I should call the police. But if I do will they shoot me?

"That's how we're talking about being under siege," Frederick said. "When Rev. Haynes says 100 percent of the time that there's excessive force, nothing's done. Nothing is done. And they may be doing things behind the scene – nobody sees it. Police officers certainly don't tell us that. And we see this kind of decision constantly.

"This is an issue about peoples' rights to live in their own community. When you cannot trust the people who are there to protect and serve, then there's chaos in the street," Hardesty said. "And if the city of Portland does not fix this, it is going to be a long, hot summer."

Rev. Mark Knudson, also of the AMA Coalition, spoke about the "action/reaction principal, which media reports say the arbitrator cited in her decision.

"We stand on these steps today because a state arbitrator, Arbitrator Wilkinson, found that there was a reason to believe that Aaron Campbell may have posed a risk of serious injury to others. But noted, she said, 'it was a close call.' Well you got the call wrong. You got the call wrong," Knudson said.

"As the Oregonian reported she was swayed by an expert witness of the police union. Search your souls, sisters and brothers. William Lewinsky, who spoke extensively about the action/reaction principal.

"You know that principal? That an armed subject can draw a gun on the run and turn around and fire sat a police officer while they're running – after being assaulted with six bean bag rounds, and dogs ready to pounce, and arms surrounded them, and – oh what show are they watching today, at these arbitration hearings?

"Why didn't Arbitrator Wilkinson listen to decade after decade of expert testimony of parents by young children of color in our community who have had to teach their children again and again the action/reaction principal.

"This is the action/reaction principle to a young person of color: Don't even move if you are pulled over. Don't make any mistake. Don't make it even look like you're going to make a mistake for you may be shot dead on the spot. Don't even confront an armed vigilante in a place called Florida as Trayvon Martin may have done.

"We have let the violence seep out of armed forces into our communities – we must stop this action/reaction principal," Knudson said. "Arbitrators, open your eyes, your ears, your hearts, your minds, yes, your souls – and be real."