Helen Silvis of The Skanner News
Published: 11 May 2011 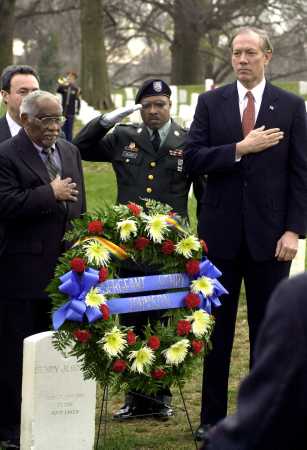 Ninety-three years ago, on a World War I battlefield in France, a young Black soldier became a legend. Now new evidence may bring official recognition for Sgt. Henry Lincoln Johnson's heroism with America's highest military award, The Medal of Honor.
Sources close to the campaign say Sens. Charles Schumer and Ron Wyden will submit a packet containing that evidence to Army Sec. John McHugh, possibly as soon as Friday, May 13.
"I didn't know that. This is very exciting," said Sgt. Johnson's grandson, Herman Johnson. "I would just love to see this happen for my grandfather, and for my uncle, Herman Johnson. It breaks my heart that my uncle passed away in his eighties without seeing his father awarded the medal he rightly deserved."

So what happened that night in 1918? On guard duty in the dark of night, Sgt. Johnson and Pvt. Neadom Roberts were attacked on two flanks by a German raiding party estimated to be 20-strong. Both men fought bravely, but Johnson displayed exceptional courage. Fighting on with his bolo knife, even after his rifle jammed and he had sustained several wounds, he repelled the attack and rescued Roberts, who was being dragged off as a prisoner.
"President Teddy Roosevelt called him 'one of the five bravest men who fought in World War I,'" Portland City Commissioner Nick Fish wrote May 9, in a letter urging Oregon's entire Congressional Delegation to support the request. "Because he served with a French unit, under French flag, during a time of segregation in our armed forces, he has been unjustly denied this country's highest military honor."
Commissioner Fish has a personal interest in the story. He heard all about Johnson from his grandfather Hamilton Fish, who served with the 369th regiment, better known as the Harlem Hellfighters. 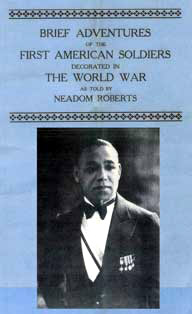 An Impartial Account Confirms Story
The new evidence adds weight to the official regimental account, written by Major Arthur W. Little. Schumer's staff recently unearthed a letter to Johnson's wife from his commanding officer Col. William Hayward, which was read into the Congressional Record in 1918; a field memo from Gen. John Pershing; and a first-person account by Johnson's comrade, Neadom Roberts.

"Henry Johnson remains an incredible example of bravery and patriotism today, and it is time that he receive his long overdue Medal of Honor," said Schumer. "I'm hopeful  that the new evidence we've uncovered will get Henry Johnson the recognition he so rightly deserves, and I'll be working with Senator Wyden to make that happen."

Also in the packet is an additional exciting discovery. NYU professor Jeff Sammons Ph.D. found in the National Archives: an account by a visiting officer, Lt. Col. M. A. W. Shockley, who is considered an impartial observer.
Shockley's account confirms important details about the attack. He records that the position was a difficult one, that the two men were alone and unsupported, and that they were attacked by a party of about 20 enemy soldiers.
A French officer told Shockley that he would, "deduce the number as about twenty men including a 'Sous officer,' on account of the fact that the wire cutters of the type found are distributed in the proportion of one to each four men."
The number of casualties was hard to confirm. Shockley's estimate of two casualties was "based upon the fact that one of the caps found contained considerable blood, a shorn lock of European hair, and a knife cut, and the evidence of the grenade explosion, the blood, clothing and gauze fragments."
Shockley also lists equipment left behind by the raiding party, presumably because when they retreated they were carrying fallen soldiers.
"We believe these new original documents along with a mountain of supporting documents provide the written chain of command endorsements and eyewitness testimonies required to overcome the previously stated 'technical' grounds and now overwhelmingly meets the Army's standards to award the Medal of Honor," said Wyden's office this week.

Campaign Takes Next Steps
If Sec. McHugh approves the honor, he will forward the request to the Secretary of Defense. If Sec. Robert Gates approves it (or Sec. Leon Panetta if Gates leaves before it reaches him), the request will move on to the Joint Chiefs of Staff and then to Congress.
"We're still hesitant because even after finding all this information … it may not be enough," Tara Johnson, Johnson's granddaughter, told Veterans of Foreign Wars radio on April 30. "That's the reality so we just have to wait and see how that will unfold."
The bid comes after a renewed campaign to honor Johnson, passed over for decades because he was Black. Eighty-eight African American heroes have been awarded the Medal of Honor. But although 1.5 million Black soldiers served in the World Wars, not a single African American who served in WWI has received the honor.  In fact, during WWI, African Americans had to fight for the right to serve their country, as well as fight for it. As a result the Harlem Hellfighters, and other Black regiments, fought under French command. Sgt.  Johnson was the first American soldier to be awarded France's highest military honor, the Croix de Guerre with Gold Palm.
"I asked them, 'Why can't you just use the citation that the French gave him'," Herman Johnson told The Skanner News. "But they told me that the records were lost in a fire, and to go forward we need additional information. I think the government should have done more. I told them I'm not going to give up, but after not hearing from anyone you just start to lose hope. This should be more than enough proof."


Recognition Came Late
The army used Sgt. Johnson's image to recruit African Americans and promote war bonds. A highway near Johnson's hometown, Albany, NY, was named after him, and his statue was enshrined at the state Capitol. America finally recognized Johnson's heroism with a purple heart in 1996. In 2002, campaigners asked that that Sgt. Johnson be awarded the Medal of Honor.
However, the Army refused on 'technical grounds,' saying that the required supporting evidence was missing. Instead, in 2003 President George Bush presented Johnson's son, Tuskegee airman Herman Johnson, with the Distinguished Service Cross.
Now Johnson's grandchildren, Tara Johnson and Herman Johnson keep up the fight supported by campaigners including: Vietnam veteran John Howe, former US Reps. Mickey Leland and Joe DioGuardi, and more recently Portland City Commissioner Nick Fish, Sen. Ron Wyden and Sen. Charles Schumer.
Schumer's staff quickly discovered the three new significant proofs of Johnson's heroism.
Gen. Pershing described the events in his field memo:
"Attention drawn to fact that the 2 colored sentries first attacked continued fighting after receiving wounds, and despite of use of grenades by superior force, and should be given credit for preventing by their bravery the taking prisoner of our men. Three of our men wounded, of whom two by grenades but all are recovering…"
Col. Hayward's account, read into the Congressional Record, said, "Henry laid about him right and left with his heavy knife, and Roberts, released from the grasp of the scoundrels, began again throwing hand grenades and exploding them in their midst... The Germans, doubtless thinking it was a host instead of two brave colored boys fighting like tigers at bay, picked up their dead and wounded and slunk away."

President Recently Recognized Two Korean War Heroes
Precedents do exist for the Medal of Honor to be assigned long after the fact. On May 2, President Barack Obama awarded America's highest honor to Pvt. Henry Svehla and Pvt. Anthony Kaho'ohanohano. These two young soldiers fought and died heroes 60 years ago during the Korean War. Svehla, with the 7th Infantry, led a charge into enemy fire, throwing grenades at enemy bunkers, continuing even when wounded. When a grenade landed in the midst of his men, instead of running, Svelha jumped on the grenade, saving others' lives by sacrificing his own. Kaho'ohanohano, a native Hawaiian, stayed behind alone to confront a superior force, all the time laying down fire cover to allow his comrades to retreat to safety.
Awarding the medal to Kaho'ohanohano 's family, President Obama thanked the campaigners.
"After his death, Tony was awarded the Army's second highest award for valor -- the Distinguished Service Cross," Obama said. "But his family felt he deserved more. And so did Senator -- and World War II vet -- Danny Akaka."
The Medal of Honor citation says the award is for, "conspicuous gallantry and intrepidity at the risk of his life above and beyond the call of duty."
The Johnson family, Sens. Schumer and Wyden and Portland Commissioner Fish believe that was exactly what Sgt. Henry Lincoln Johnson displayed that long ago night in Northern France.