WASHINGTON--Sen. Barack Obama last week warned fellow Democrats they must take religion seriously, delivering a highly personal speech that noted his own religious awakening and how his father died an atheist and his mother a skeptic about organized worship. 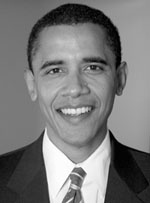 The Illinois lawmaker recounted before an audience of church and lay leaders at National City Christian Church how it was not until after he graduated from college and became a community organizer in Chicago that he confronted his "spiritual dilemma."

"The Christians who I would work with, they recognized themselves in me; they saw that I knew their Book and shared their values and sang their songs. But they sensed a part of me that remained detached and removed, that I was an observer in their midst," Obama said.

"In time, I came to realize that something was missing ... that without a vessel for my beliefs, that without a commitment to a particular community of faith, at some level I would always remain apart, and alone," he said.

Obama, now the Senate's only Black member, said he drew closer to the church, in part because he believed in the power of the African American religious tradition to spur social change, and also because he realized that having faith does not mean that one does not have doubts.

As a result of his newfound understanding, he said he eventually walked down the aisle of Trinity United Church of Christ and affirmed his Christian faith.

"It came about as a choice, not an epiphany -- I did not fall out in church," he said, drawing a roar of laughter.

Obama cautioned against Democratic or progressive strategies that would avoid conversations about religious values altogether. He said most Democrats have "taken the bait" to avoid debating such issues out of fear of offending anyone.

"We first need to understand that Americans are a religious people; 90 percent of us believe in God ... and substantially more people believe in angels than do those who believe in evolution," Obama said.

For many of our problems to be solved, it will require not only changes in government policy, but also changes in hearts and minds, he said.

"I believe in keeping guns out of our inner cities, and that our leaders must say so in the face of the gun manufacturers' lobby -- but I also believe that when a gang-banger shoots indiscriminately into a crowd because he feels somebody disrespected him, we have a problem of morality; there's a hole in that young man's heart -- a role that government programs alone cannot fix."

Obama pointed out that national denominations have increasingly shown themselves to be a force on Capitol Hill, on issues such as immigration and the federal budget. He also said individual churches such as his own sponsor day care programs, build senior centers, help ex-prisoners and rebuild hurricane-ravaged areas.

"No matter how religious they may or may not be, people are tired of seeing faith used as a tool to attack and belittle and divide, they're tired of hearing folks deliver more screed than sermon," he said.

Obama, while only a freshman senator, has often been mentioned as a prospect for the Democrats' national ticket in 2008 or later. He is one of his party's best speakers and most requested fund-raisers, and he has crisscrossed the nation drawing financial support to candidates who are potentially future allies.

Earlier this year, on national television, he said he would serve out his Senate term and would not run for president or vice president in 2008.

"Nothing has changed," Obama spokesman Tommy Vietor said Wednesday. "The speech reflects his desire to welcome more people of faith into the Democratic Party. Viewing this speech -- and everything Barack does -- through an '08 lens does a disservice to the message of the speech and to his work in the Senate."