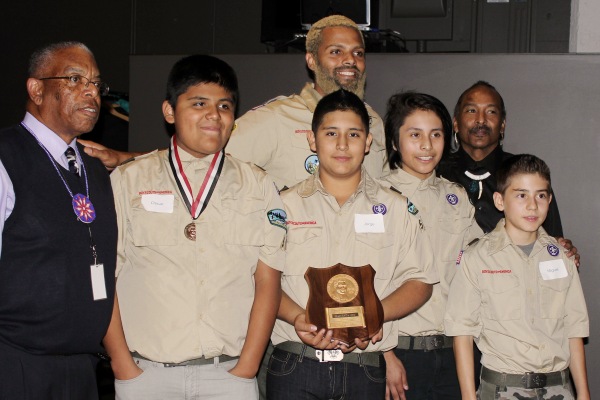 Pat Reiten, CEO of Pacific Power was the event chair and Portland Police Commander Kevin Modica presented the awards. Modica, who along with Reiter serves on the steering committee of the Scout’s community impact program, spoke about the work underway in schools to provide opportunities for boys. The community impact program supports scouting programs in some of the county’s most disadvantaged schools, and with children of prisoners. It partners with the county’s SUN schools program, as well as with Self Enhancement Inc., and Pathfinders of Oregon.

Honored at the ceremony were:

La Motte, who was surprised to be chosen for the award, was honored with a Pendleton blanket, a plaque and a special song from his wife. As she sang, she played a ceremonial drum that according to tradition will never be played again.

Roy Pittman, longtime head wrestling coach and mentor at Peninsula Park Community Center was honored for his work with youth. Pittman has worked with more than 60,000 youth, many of them who went on to win state, regional and national titles. But Pittman’s focus is on winning at life, more than in sports, and he makes sure that anyone can participate in his program regardless of financial circumstances.

Jaclyn Hoy accepted an award for Hacienda Development Corporation. The nonprofit is honored for its contributions to low-income residents helping families with affordable housing and homeownership opportunities as well as with economic and educational support. Hacienda serves around 2,000 people, 60 percent of them Latino.