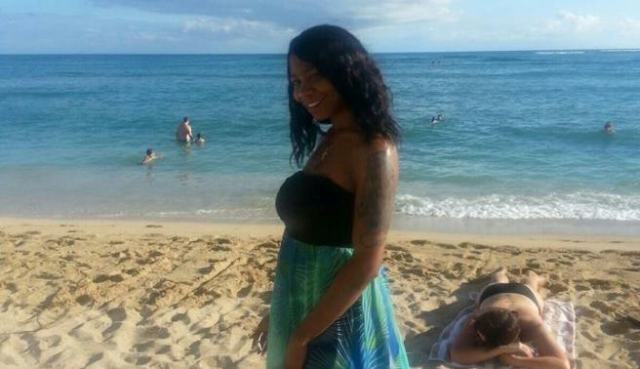 CAMP SMITH, Hawaii (AP) — The commander of U.S. Marine Corps Forces in the Pacific is upholding the life sentence and dishonorable discharge of a Marine convicted of murdering Portlander Ivanice Harris in Hawaii.

Master Sgt. Nathaniel Cosby was convicted in April of murder in the 2013 killing of "Ivy" Harris in a Waikiki hotel room.

Harris was in Hawaii with her boyfriend and pimp Mark Miles and friend Jill Gibides to celebrate her 29th birthday. But Harris was also working as an escort, and went back to Cosby's hotel room with him. She was seen going into the hotel but not leaving. Cosby was captured on surveillance camera leaving alone with a heavy suitcase. Harris body was later found near an oceanside road to the north of the island.

In January, Miles, a rapper known as Meezilini, was charged with trafficking women across state lines.

The Marine Corps said this week the case will be reviewed by an appellate office. Cosby's lawyers argued he killed Harris in self-defense.

Cosby was in Hawaii on a temporary assignment from Japan. He's confined at the U.S. Military Disciplinary Barracks in Ft. Leavenworth, Kansas. It's the Department of Defense's only maximum security correctional facility.

Mark “Meezilini” Miles was charged with two counts of violating the Mann Act and two counts of violating the Travel Act for transporting a young Portland native, Ivanice “Ivy” Harris, from Oregon to Hawaii in May 2012 and May 2013. Ivy Harris was killed in Hawaii during the May 2013 trip. A U.S. Marine has been charged with murder in connection with Ms. Harris’ death and is awaiting trial.

“Local traffickers are sending young Portland-area women all over the country to have sex with strangers for money,” said U.S. Attorney Amanda Marshall. “These young women, far from home, are being placed in grave danger so that their pimp can buy himself a Mercedes or a Cadillac or an expensive pair of jeans. The reason traffickers do what they do is because they think they can get away with it; we are here to show them they are wrong.”

“Until now, successful pimps reaped all the rewards with none of the risk, while the girls and young women they manipulated faced a life of violence and abuse,” said Kevin Rickett, Acting Special Agent in Charge of the FBI in Oregon. “Operations such as this one show the FBI can make a difference, but sex trafficking is much more than just a law enforcement problem. This is an issue that our shared community must both acknowledge and address.”

Two individuals have not yet been arrested, and those indictments remain sealed. Those two individuals are also charged with sex trafficking a minor, as well as transporting the minor for prostitution.

An indictment is only an accusation of a crime, and a defendant should be presumed innocent unless and until proven guilty.

The indictments stem from Operation Traffic Stop, an investigation by the Federal Bureau of Investigation. The cases are being prosecuted by Assistant U.S. Attorney Stacie Fatka Beckerman.